The President is transforming the federal courts in a flurry unlike anything we’ve seen in the past. Since he began his tenure in office, President Trump made revamping the courts a top priority.  Even before elected he made this one of his most prominent campaign pledges. This started with his promise to fill Justice Scalia’s seat on the Supreme Court at the commencement of his presidency and has continued at a rapid pace ever since.

While this process began at the Supreme Court it surely has not lasted there. The federal courts of appeals and federal district courts have also seen practically complete overhauls. This process has taken the country by storm and does not show any signs of relenting. Trump recently tweeted that he placed 160 judges on the bench and was aiming towards 200. This group is relatively socio-demographically homogeneous, but many democrats’ biggest concerns stem from the homogeneity of their jurisprudence.

This post examines Trump’s nominees to their first Article III federal judgeships.  These individuals are particularly worthy of analysis because unlike elevated judges, they were not previously nominated by another president. With this group, Trump has been able to put his unique stamp on the federal judiciary by plucking nominees based on characteristics unrelated to previous judging. This means that Trump and his proxies had to examine other characteristics of these nominees to make assessments regarding their competencies and qualifications. Many of these attributes are examined below. This post goes back further in time than other comparative pieces as it uses FJC data to compare Trump’s appointees to all other first time Article III confirmed judges from presidents starting with Richard Nixon.

Presidents nominate judges for reasons other than to merely uphold the law. They instead nominate candidates with the expectation that these judges will support and uphold their own policies. Such is clear from presidential nominees’ campaign promises.  To do so, presidents must be specific in the types of judges they select as each president’s agenda is unique, even within the same party.  According to the FJC, Trump had 142 of his Article III nominees to first time judgeships confirmed by the time of this post. The figure below shows how Trump’s confirmations so far compare to previous presidents’ full slate of confirmed Article III first time judges since Nixon.

Trump has nearly half as many confirmed first time judges as Obama had through his eight years as President. In his first term in office, Trump is only 27 first-time judges behind the last president that sat a single term, President George H.W. Bush.

Since Trump has only completed a portion of a term as president, this post looks at percentages of judges along with whole numbers when examining judge attributes. This creates measures that can be compared across judges without accounting for a certain amount of time in office.

So far, for instance, a much higher percentage of Trump’s first time judges were former Supreme Court clerks than any other president examined below. 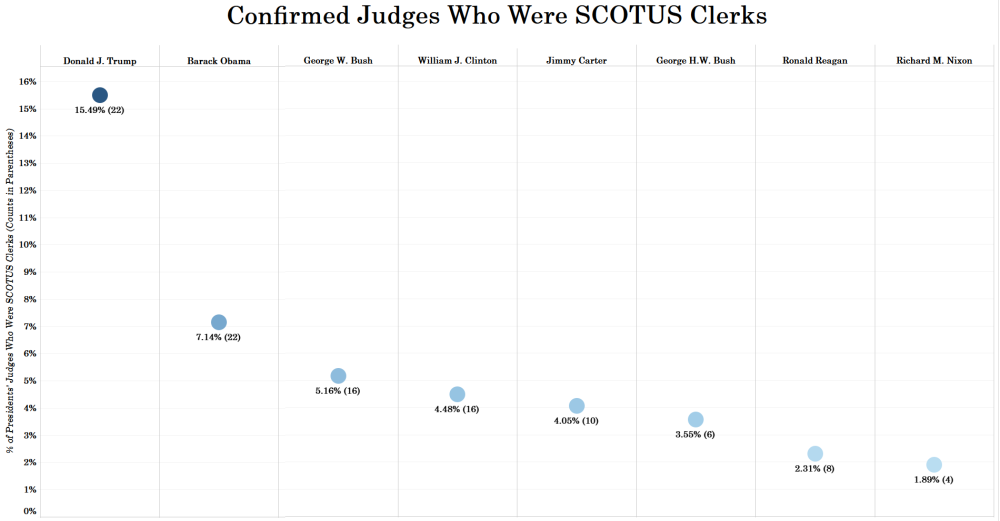 Trump’s 15.5% more than doubles that of Obama, who holds the closest percentage to Trump. As we go back further in time, the norm of judges previously working as clerks was not as potent and this helps explain the lower percentages probably prior to Clinton’s presidency. 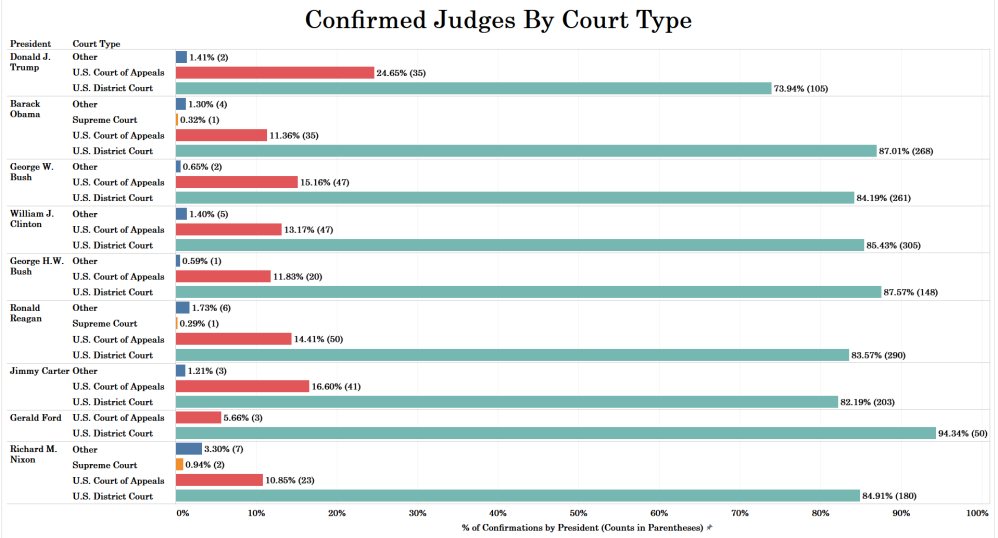 With almost 25% of his confirmed first time judges going to the federal courts of appeals, Trump’s ratio of federal appeals judges to judges on other courts far surpasses that of any of the other presidents in this figure. The president with the second highest percentage of appeals courts judges, Jimmy Carter, had an almost 10% lower rate of appeals court judges at just over 16.5%. This high rate of judges confirmed to federal appeals courts embodies the powerful shift Trump is currently making to the federal courts in general.  Since both of Trump’s nominees to the Supreme Court were elevated judges, Trump does not have a Supreme Court line item in this figure.

Aside from Trump, only two other presidents had at least 3% of their first time judges confirmed to one single appeals court and aside from Jimmy Carter, Trump is the only president with 3% of his judges confirmed to two different appeals courts – the Sixth and Ninth Circuits.  The Ninth has been a focal point of discussion recently as Trump is shifting its historic liberal center farther to the right than has been the case in recent memory.

Trump’s first time judges aren’t only unique for their propensities to sit on federal courts of appeals. They are distinct from other presidents’ nominees in a variety of other ways. One way that has stirred controversy in recent years has to do with ABA Qualifications Ratings. Conservatives have long complained of the ABA’s liberal bias, yet this rating is still generally seen as the gold standard for rating judicial nominees’ qualifications during the confirmation process.  The figure below shows how Trump’s first time judges stack up against those from other presidents.

If the ABA ratings presented an inherent liberal bias then we might expect lower ratings across the board for Republican Presidents’ nominees. Trump has a higher rate of confirmed first time judges with “not qualified” ratings than any of his counterparts in the figure, and has a rate that is twice as high as that for any other president.  At 64%, Trump has a higher rate of “well-qualified” confirmed first time judges than any other president on the list aside from George W. Bush. These polar discrepancies might explain how these qualifications play into Trump’s calculi of judges only in limited instances. These data do not go a long way though in supporting an argument that the ABA ranks Republican Presidents’ nominees lower on the qualifications scale than it does Democratic Presidents’ nominees.

Trump has been criticized for his selection of largely white, male judges. As three-quarters of his first time judges are male, this critique initially seems on target.  When looked at in comparison to Obama’s 58% to 42% man to woman ratio for first time judges, Trump’s male dominant list of first time judges is even more glaring. Trump’s selections do not appear uniquely lopsided though when compared with his Republican Presidential predecessors.  In fact, Trump’s current ratio of male to female judges is less male dominant than any of his fellow Republicans on the list.

This is largely influenced by time period as well as by party (and Trump’s individual selection criteria). Democratic Presidents had fewer relative female judges as we move back in time as we see Clinton had only 5% fewer female first time judges than Trump and Carter had almost 8% more male judges at approximately 84% of his confirmed first time judges. Previous Republican Presidents had even more skewed ratios as Nixon and Ford had over 99% and 98% male judge rates and Reagan’s rate of male judges was over 91%.

An interesting question then becomes what is the relevant comparison category. Much of the public expects more diversity in the federal judiciary than in the past. Trump appears less concerned with diversity though than with choosing judges that agree with his conservative beliefs.

The lack of diversity in Trump’s first time judges is more apparent when looking at the judges’ races and ethnicities. 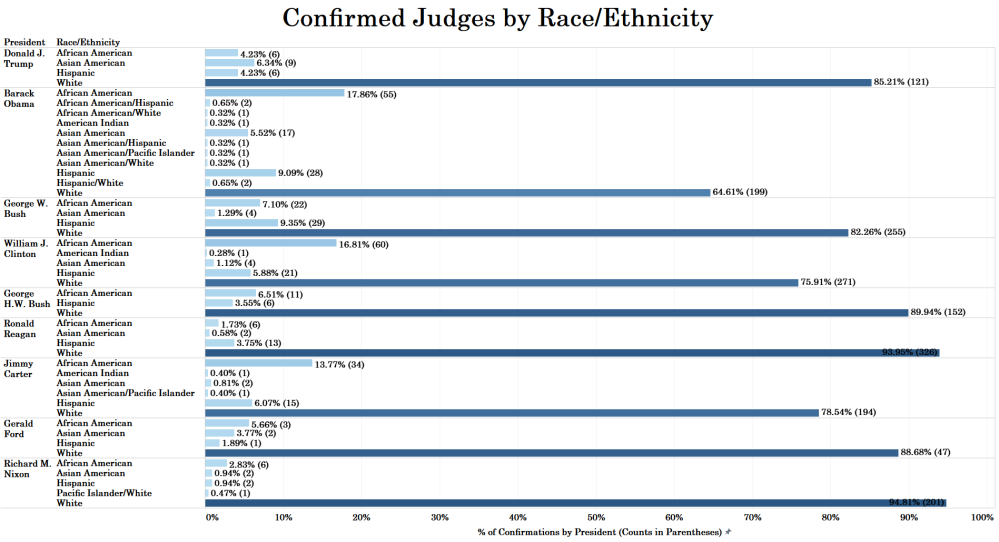 Trump’s judges cluster according to many other shared features. One of these features is where these judges hail from and specifically where they were born. The following graphic shows the states where at least 5% of a president’s first time judges were born. 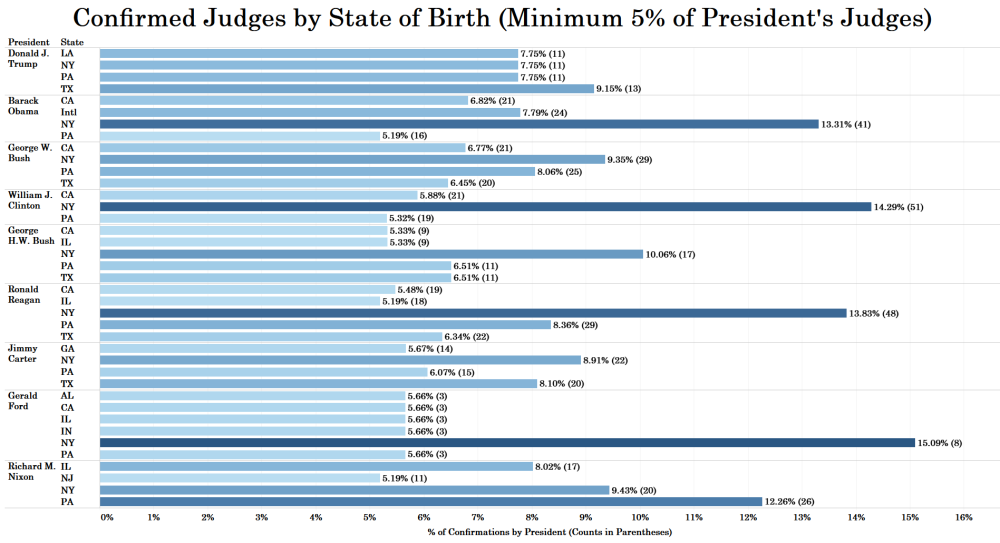 Trump’s preference for judges from the south and northeast is apparent in this figure. The state where the highest rate of Trump’s first time judges were born is Texas. After Texas, an equal number of Trump’s first time judges, 11, were born in Louisiana, Pennsylvania, and New York.  Trump is one of only three presidents on the list that did not pick at least 5% of his first judges from the pool born in California.  The other two such presidents were Carter and Nixon. Going back to the notion of diversity, it is worth noting that Obama is the only president with over 5% of first time judges born outside of the United States.

A lot rides on where a potential judicial nominee attended law school. Presidents historically have looked at nominees’ law schools to give a sense of nominees’ qualifications and capabilities. This has led to presidents favoring nominees from top school such as Harvard and Yale (in a previous article I profiled the law schools federal judges attended in more acute detail). While this norm has not entirely shifted, this is one area  of selection where Trump’s picks are clearly more varied than other presidents’ selections. The following figure lists all law schools attended by presidents’ first time judges that comprise at least 3% of a given presidents’ judges.

Like all of the other president’s on this list, the majority of Trump’s confirmed first time judges went to Harvard Law School. George W. Bush is the only president with two schools tied for producing the most judges and this tie was between Harvard and Georgetown Law.  While Trump selected the most judges from two top-five schools according to US News latest rankings, he also selected over 3% of his first-time confirmed judges from three law schools outside of the top 10 ranked schools. Four other presidents on the list selected at least 3% of their judges from University of Texas Law School, which is within the top 20 ranked schools. Trump is the only president since Ford though to select 3% or more of his judges from schools outside of the current top 20. Over 3% of Trumps confirmed judges came from the current #25 school in the country, University of Alabama School of Law as well as from #27 University of Georgia School of Law. This suggests Trump is weighting factors outside of a the law school a judge attended more heavily than many of his former presidential counterparts.

The federal courts will not look the same when Trump exits office. Whether he serves one term or two, his many confirmed selections to federal courts are already having a profound effect on the judiciary. Trump’s additions to the courts of appeals and the general rightward trajectory of many of these courts will be a lasting legacy, especially as several of these courts are likely to move from a majority of judges nominated by Democratic Presidents to a majority of judges nominated by Republican Presidents.

Presidents’ visions for the courts are inherent in their selections of first time judges for federal courts as these judges gives presidents opportunities to make imprints on the federal judiciary without any input from previous presidents.  So far, Trump has filled a bevy of judicial vacancies based on nominees’ commitments to conservative policies. This means putting policy views ahead of other characteristics.

Diversity is something new to federal judges and federal courts. Even with a more diverse federal judiciary than we have had at any point in the country’s history, the interest in a diverse range of candidates for judgeships is not evenly distributed among presidents. With Trump’s desire to shape the judiciary with conservative judges, the socio-demographic diversity in selections that we had seen from previous presidents have taken somewhat of a backseat. This does not mean Trump’s selections lack diversity entirely. They come from a variety of law schools, many different than those that dominated other presidents’ selections. They come from different regions of the country.  These judges are mainly white males, many of whom have shown they share Trump’s views on a range of issues. With the number of judges Trump has already appointed and will appoint before he leaves office, not all will follow the mold for judges that the president seeks. If a sufficient number do though, as they have already shown is likely to be the case, the federal courts will be a very different place at the end of Trump’s presidency from where it was when he entered office.