Federal laws for registered sex offenders are designed to be clear – under the Sexual Offender Registration and Notification Act (SORNA) if you are on this list and you move residences you need to update your residency.  And yet, what happens if you leave the United States? SORNA does not specify.  This is the issue in Nichols v. United States (No. 15-5238).  The Court heard arguments in this case on March 1st.  This post takes a look at the Justices statements during oral arguments.

The United States’ case was argued by Assistant Solicitor General, Curtis Gannon.  Since this case deals with statutory interpretation much of the oral argument was directed towards Gannon to examine the correct application of SORNA.  With that in mind, the first figure looks at the number of words each Justice used during the respondent’s argument.  The lengthiest talking turns (Gannon’s statements removed) were from Justices Breyer and Kagan although Chief Justice Roberts had four relatively long turns talking.

In terms of an overall count, Justice Breyer’s spoken word count during respondent’s argument was 680 words while Justice Kagan used 598 words and Chief Justice Roberts used 592 words (for the remainder of the Justices: Justice Ginsburg used 121 words, Justice Sotomayor 112 words, Justice Alito 92 words and Justice Kennedy 85 words).  Breaking this down by type of talk gives a slightly different impression.  Justice Breyer only asked 12 questions while he made 51 statements.  Justice Kagan asked 7 questions and made 32 statements.  Chief Justice Roberts on the other hand asked 13 questions relative to his 37 statements.  [E-mail me if you are interested in additional statistics of the Nichols oral arguments by Justice]

Breaking this down by the type of question we begin to get a picture of the type of inquiry the Justices made during the argument.

As the figure shows Justice Breyer was most interested in “does” and “are” based questions and Justice Kagan was interested in these as well as “could” and “might” based questions.  Chief Justice Roberts focused on “how,” “should,” and “shall” questions.  These question types all generally make sense in interpreting SORNA as they focus on the implications of interpreting the statute as applying in the petitioner’s situation.

As with Hellerstedt, the Justices who spoke during the respondent’s argument tended to talk less during petitioner’s argument and vice-versa.  In some cases this might indicate the Justices’ preliminary voting appraisals although due to the United States’ overwhelming success on the merits and particularly in statutory cases this is less likely the case than it was in Hellerstedt. 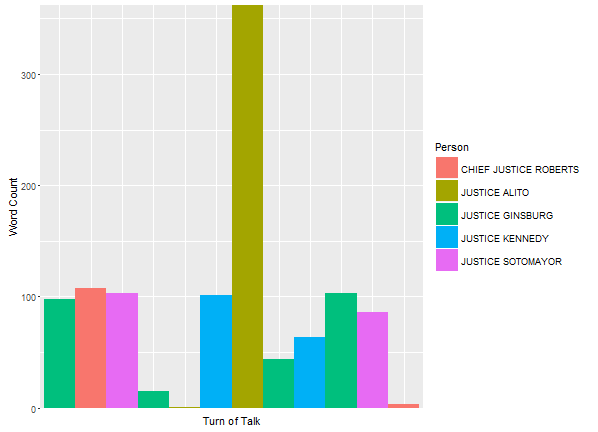 Looking at the types of questions there is also some variation here from the question types during petitioner’s argument. 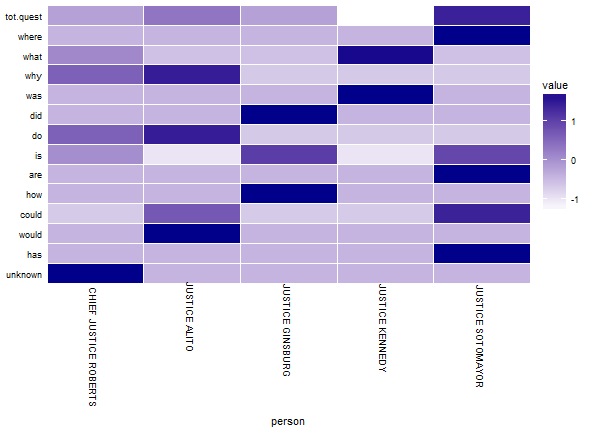 While the Justices asked questions pertinent to the implications of the statute, they also ask questions that apply more to the case facts.  Justice Sotomayor had a high level of “where” questions, Justice Kennedy asked “what” and “was” questions, and Justice Alito asked “why” questions.  In the context of the case this may be expected if the Justices are more interested in the United States’ view of the statute generally and of policy implications, the petitioner’s portrayal of the direct effects of the statute’s application in this particular case.