Oral arguments begin for the 2016 Supreme Court Term tomorrow, Tuesday October 3rd.  On one hand, commentary surrounding the Term often relates to the lack of interesting cases on the Court’s docket.  Much of the rationale for the current Court’s decisions is thought to stem from its depleted number of Justices.  Thus while the political stakes surrounding the Court are high this Term, the stakes in the Court’s choice of cases may not be proportional.

One thing that clearly has not changed from past Terms is the representation and specifically parties seeking representation from frequent repeat players before the Court.  Other similarities include the regular participation of the Office of the Solicitor General (OSG), which now represents amicus or merits parties in 23 of the 37 cases currently granted by the Supreme Court this Term (this includes three instances of cases joined for argument).  A second similarity is the dominant participation of attorneys and firms based out of the Washington D.C. area.  The chart below counts party and amici representation for granted cases by location as listed in the Supreme Court’s docket. 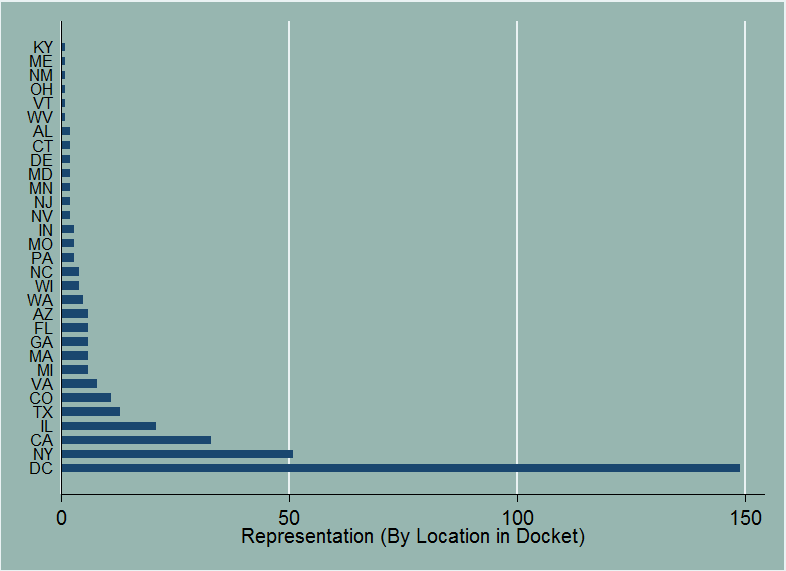 Representation listed from DC make up the overwhelming majority of all representatives before the Court in granted cases with 149. This is compared to the next highest location, New York, with 51.

The data in this post is based on the 37 cases with oral arguments either scheduled or granted and pending future scheduling.  All of the following figures have OSG representation removed.

Beginning with attorneys of record, those with multiple representations are all familiar faces in the Supreme Court.  The chart below looks at all merits party representatives with at least two granted cases so far this Term.

Neat Katyal tops the list as the only non-OSG attorney with four cases, which doubles the number of cases of any other attorney so far this Term.  Seth Waxman, Paul Clement, Scott Keller, and Josh Rosenkranz each regularly argue multiple cases a Term.  Marc Elias of Perkins Coie is often involved in high stakes election law litigation. Colorado Solicitor General Frederick Yarger and Snell and Wilmer partner Andrew Jacobs are both newer additions to the list of Supreme Court repeat attorneys.

Looking at a chart including amici representatives and focusing on attorneys with at least three total cases, there are several of the same inclusions as well as a couple of different names. 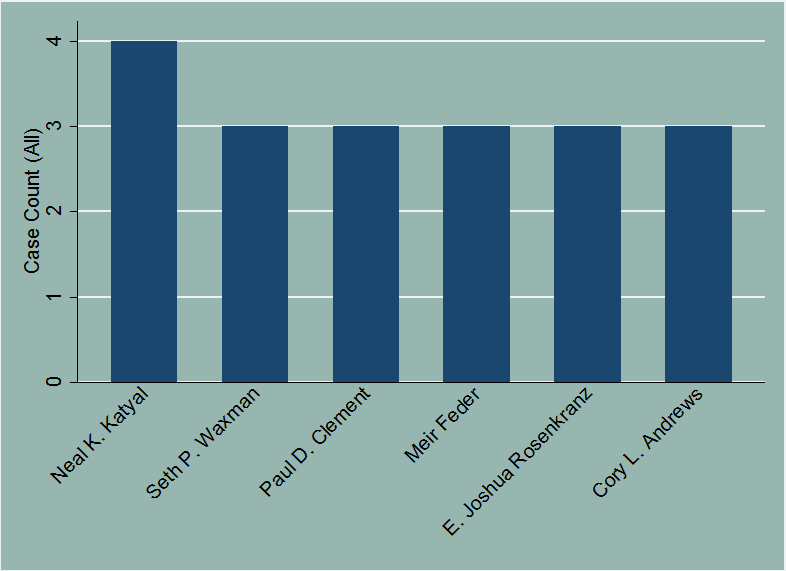 Neal Katyal still tops the list with four cases, but Seth Waxman, Paul Clement, and Josh Rosenkranz each have one additional case due to an amicus representation. In addition, Meir Feder and Cory Andrews each are representatives in three cases so far this Term.

Breaking representation down by firm there are similar patterns.  The firms participating in at least three granted cases as merits party representation can be found below.

WilmerHale tops the list with six cases. Aside from Seth Waxman, every other WilmerHale attorney in granted cases is representative in one case.  With the exception of attorneys from the Office of the Federal Public Defender, the remaining firms on this list are due predominately to one attorney’s repeat representations.

When we add in amici representation there are an increasing number of actors from previous Terms.  The chart below covers firms or groups participating in at least four cases so far this Term.

Jones Day, the firm involved in the most cases last Term is the lead firm in terms of cases so far this Term  The remaining firms on this list primarily had multiple representations last Term as well.  Kirkland & Ellis is counsel on more cases so far this Term than it was for the whole of last Term largely due to Paul Clement and the rest of the Bancroft PLLC team joining its ranks.  The Constitutional Accountability Center and Washington Legal Foundation are notable additions to the law firms (and state representatives) in this chart.

With only two months of oral arguments scheduled so far and 37 total cases granted, there is significant room left in the Court’s docket that will ultimately change the nature of these figures by the end of the 2016 Term.  As more groups file amicus briefs in the already granted cases, the representatives in active merits cases will also grow.  As this Term is quite different from past Terms with the vacancy on the Court, this post makes clear that there is and likely will at least continue to be stability in the attorneys and firms that file briefs and argue before the Justices.