There is a world of difference between state and federal judges.  Although both sets serve to perform the same general duty, much of this difference lies in the form of the relevant laws that they construe and interpret on a daily basis.  Another source of difference comes in the form of how these judges reach the bench.  The election/appointment selection methods for state supreme court lead to vast differences in the type of data available on state and federal judges and in the scope of this data.  For that reason in a previous post I explored ideological and campaign finance data related to the federal judges on President Elect Trump’s list of potential candidates for the vacant Supreme Court seat.  In this post I look at the state supreme court justices’ (and U.S. Senator) side of the equation.

Trump’s list includes a diverse set of twenty-one possibilities to fill the vacancy.  This nomination will be especially unique if Trump chooses a candidate that does not currently hail from the federal courts of appeal system as all current Justices aside from Elena Kagan sat on a federal court of appeal prior to their Supreme Court nominations (Kagan was the United States Solicitor General).

One relevant facet for understanding the individuals on this list is the differing processes to reach the Supreme Court in different states.  These processes and state rules create divergent levels of information available about these justices as well as divergent laws regarding their political engagement.  The table below lists the states where these state supreme court justices sit as well as the selection method for judicial candidates in the state (note that election is generally the retention method after initial appointment by a state governor).

Election systems tend to be more political by nature and there are often, although not always, campaign contributions linked to their election campaigns.   This post proceeds to go through available information regarding the candidates.

Ideologies: In the case of state court justices, Bonica and Woodruff performed an analysis of ideology based on campaign finance contributions.  This analysis included five of the eight state supreme court justices on the list.  The chart below compares these justices’ relative ideologies.

These justices’ scores all rank on the conservative end of the spectrum.  Based on these scores, Justice Allison Eid is the most conservative followed by Justice Don Willett.  The most liberal of the five is Justice Robert Young.  We do not have scores available for Justices Blackwell, Larsen, and Lee.  Although not on the same scale, GovTrack ranked Senator Mike Lee on the conservative end of the spectrum of Senators in a 2015 analysis.

Justice Blackwell sits on the Supreme Court of Georgia.  He was appointed by Republican Governor Nathan Deal who according to GovTrack ranked moderately conservative relative to other state governors.

Along with individual donors (including the top contributor) there are several law firms and corporations listed.  There is also information available regarding Blackwell’s prior contribution to other political campaigns.  This information is below.

Canady is a state supreme court justice on the Florida Supreme Court.  He was appointed to the court in 2008 by Governor Charlie Crist.  Crist was a Republican at the time of the nomination and later became a Democrat.  Prior to becoming a state supreme court justice, Canady was a member of the House of Representatives in Florida from 1993 through 2001.  Canady’s House campaigns provide information regarding contributions towards his political campaigns:

As is evident in this graph, Canady received donations from corporations and law firms including the National Rifle Association and the law firm Holland and Knight.  There is, however, comparably scant data available on campaign contributions to or from Canady since he left the House.

Justice Eid is justice on the Colorado Supreme Court.  She was appointed by Republican Governor Bill Owens on February 15, 2006 and was retained by voters in November 2008. 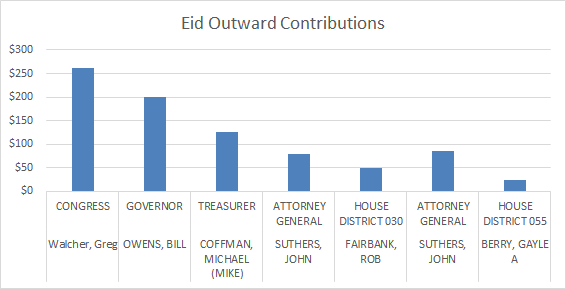 As is apparent, Eid contributed to various campaigns including to her appointing Governor, Bill Owens. 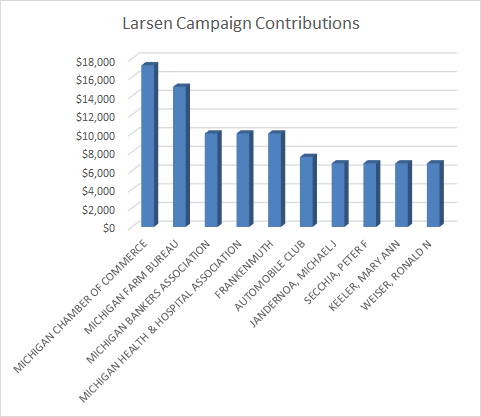 As we can see, Larsen received funds from many state level organizations including her largest contributor, the Michigan Chamber of Commerce.  She also received donations from several individual donors.

Lee was appointed to the Supreme Court of Utah by Republican Governor Gary Herbert.  There is little information regarding inward donations to Lee’s campaigns or outward donations from Lee.  The figure below shows campaign contributions made in his name. 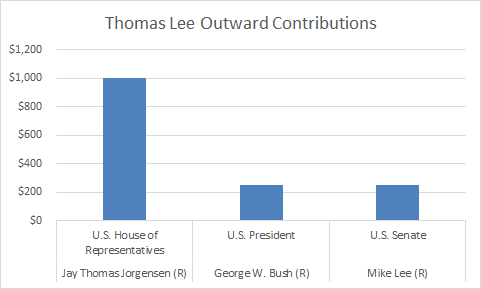 Of the three contributions from Lee, one was towards President George W. Bush’s Presidential campaign and another was to his brother (and another contender for the vacant Supreme Court seat per Trump’s list) Mike Lee’s Senatorial campaign.

Justice Stras sits on the Minnesota Supreme Court.  He was appointed by Republican Governor Tim Pawlenty.  Data relating to controbitions towards Justice Stras’ campaigns can be found below.

The largest donor listed is the law firm Robins Kaplan Miller.  As the chart shows, the donors are predominately individuals although they also include the Dorsey National Fund.

Justice Willett sits on the Texas Supreme Court and was placed there by Republican Governor Rick Perry in 2005.  Although there is little information about Willett’s past personal campaign contributions, one instance includes a $250 donation to Representative Phil Gramm’s U.S. Senate campaign for the State of Texas in 1995.

There were many large contributions donors made to Willett’s state supreme court election campaign as the figure below shows: 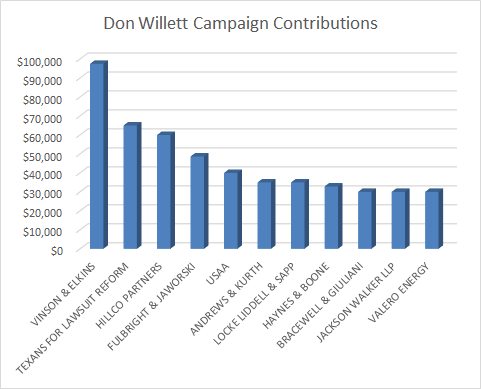 Compared to the other state supreme justices’ campaigns, Justice Willett’s campaign had the strongest funding from corporate/business donors.  These include contributions from the largest contributor, law firm Vinson and Elkins, as well as from other firms including Fulbright and Jaworski.

Justice Young is the other possible nominee along with Justice Larsen from the Michigan Supreme Court.   He was appointed to his seat by Republican Governor John Engler in 1999.  Like Larsen, Young received campaign support from various state groups and organizations.

Young’s largest contributors include Michigan’s Republican Party as well as Michigan’s Health and Hospital Association.  Data relating to Young’s own outward campaign contributions can be found below.

Although not a state supreme court justice, Senator Mike Lee fits into this post as a state representative.  Mike Lee, Thomas Lee’s brother, was elected to the U.S. Senate to represent the State of Utah in 2011.  As a federal representative there is a large amount of data available on contributions to his election campaign.

Among the large corporate donors to Lee’s campaign include the conservative economic organization Club for Growth, as well as the Senate Conservatives Fund.  The law firm Sullivan and Cromwell was also one of his major contributors.  Although Lee does not have outward campaign contributions in his name, there are various contributions made through his campaign organization Friends of Mike Lee, Inc.  Information about this organization is available on the FEC’s website and can be found here.

To synthesize the information in this post – there is uneven data available on the state level justices and representative who are the potential candidates for the vacant Supreme Court seat.  The information profiled in this post presents basic data about the candidates’ relative ideologies to the extent available.  This information conveys Justice Eid as the most conservative of the five justices listed.