Each October before the Supreme Court begins its term, the justices meet for the “long conference” to review the Court’s agenda.  The justice held this conference for the upcoming term two days ago on September 25th.  During this conference the justices meet to discuss petitions to the Court for the upcoming term.  This is the largest set of petitions that the justices and clerks wade through each term as the justices haven’t met since June to discuss pending petitions.  The number of petitions sorted through during this conference is typically over 1,000 with the vast majority denied.  This glut of cert petitions eventually is winnowed down to a small list of granted cases.  In the past certain characteristics have pointed to cases that have greater likelihood of review and grants than others.  Two of these characteristics are whether any amicus briefs were filed at the cert stage and whether an elite Supreme Court attorney was involved at the cert stage.  This post looks at the petitions with such associated characteristics that will in all likelihood at least minimally garner serious review.

When amicus groups file briefs at the cert stage they let the Court know that interests in the case extend beyond the named parties.  This provides a gauge of case importance which is one of the factors that typically goes into cert decisions.  Approximately 33 cert petitions examined during the long conference had at least one associated amicus brief.  Fifteen of these had more than one associated amicus brief. Those cases are displayed below.

Identifying elite cert attorneys is somewhat subjective as many attorneys have Supreme Court experience. Luckily a paper I co-authored last year identifies some of these attorneys by their previous cert success.  These attorneys are listed in the figure below along with the number, if any, of cert level cases they are involved in that were discussed at the long conference. 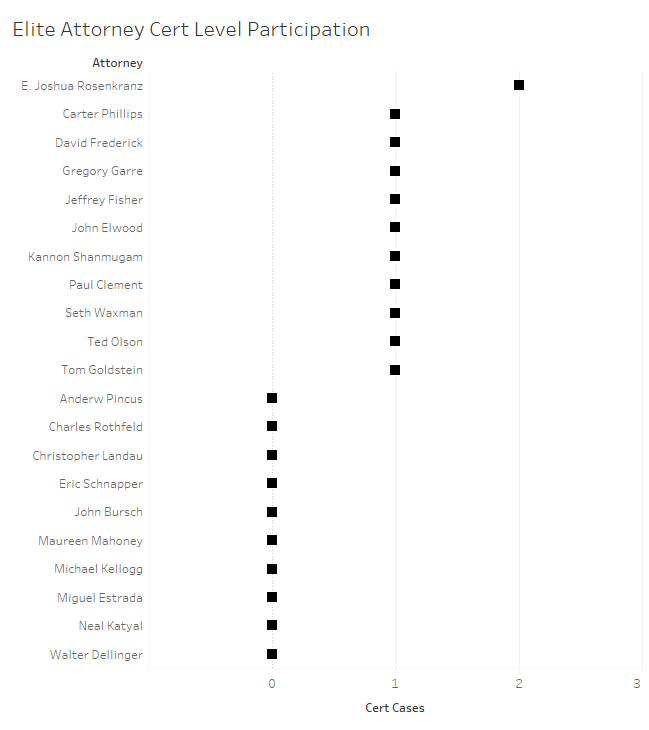 More than half of the attorneys on the list are participating in the cert stage of a case examined during the long conference.  The only attorney in this group with more than one such case is Orrick’s E. Joshua Rosenkranz.

Below are the 38 cases pending a decision on cert that either have an associated amicus brief, at least one elite attorney, or both. Information is also provided about the case topic and/or question and in some instances information is given regarding an amicus’ interest in the case. Other regular Supreme Court attorneys are also listed along with their cases. You may wish to note that some very similar issues appear in multiple cases.

The Court asked for the Solicitor General’s views on cert in two cases discussed at the long conference: Snyder v. Does #1-5 and Magee v. Coca-Cola. Although the SG recommended denying both petitions, this is also a sign of these cases’ importance and so they are discussed below as well.

Interest: “Amici write separately from the Petitioner to focus the Court on the several ways the federal courts of appeals have analyzed Matsushita and explain why the First Circuit’s categorical view is the least supportable approach.”

Interest: “If left outside the ambit of federal voting rights law, Michigan’s extreme example may serve as a model for other jurisdictions of the latest “sophisticated device” to deprive citizens of color a meaningful right to participate in the political process.”

Interest: “The ABA also actively supported the legislation…which provides that federal government attorneys practicing in a state shall be subject to that state’s ethical laws and rules “to the same extent and in the same manner as other attorneys in that State.” The ABA believes Section 530B requires that authority to regulate the ethical conduct of federal prosecutors practicing in New Mexico remain with the State of New Mexico, including as to when they may be subject to discipline for issuing grand jury subpoenas to attorneys.”

Interest: “ADEA’s prohibition on retaliation is crucial to the Act’s vitality, and effective enforcement of that prohibition turns on plaintiffs having access to all appropriate remedies, including compensatory damages, as Congress intended.”

Interest: “Abusive, unfounded FCA qui tam litigation against manufacturers harms those businesses, their employees…NAM therefore has a strong interest in ensuring that the courts uniformly and properly enforce the existing safeguards against non-particularized FCA pleadings, including Federal Rule of Civil Procedure 9(b) (“Rule 9(b)”).”

Interest: The Chamber and its members have a strong interest in this case, as the decision below poses a threat both to the Nation’s nuclear energy industry and to preemption doctrine as a whole.

Interest: “The Innocence Network has an interest in establishing that such a freestanding claim is cognizable on federal habeas corpus, in the interest of providing wrongfully convicted, innocent prisoners with an avenue to pursue their actual innocence claims in the federal courts, and in the interest of minimizing the risk of wrongful convictions in this and future cases.”

Interest: “This case presents a question of critical importance to NACDL’s members and the fair administration of justice: whether a criminal defendant effectively waives the protections of the Double Jeopardy Clause by consenting to severance of claims in order to avoid a prejudicial trial. Review is warranted to resolve the acknowledged conflict on this issue, and to provide needed guidance to criminal defense lawyers and their clients, prosecutors, and lower courts.”

Interest: “Amici have an interest in mitigating the disruptive and burdensome effects…by ensuring that defendants are permitted to inform juries, in accordance with state law, of their compliance with applicable federal standards.”

Interest: “Amici have significant concerns about how the Ninth Circuit’s ruling on an important issue of evidentiary privilege law will affect myriad other cases, including those in which the same or similar privilege issue could arise.”

Interest: “[T]his case once again asks the Court to consider “what limits there are upon this power of technology to shrink the realm of guaranteed privacy.” Kyllo, 533 U.S. at 34. The Court should grant certiorari to make clear that the Fourth Amendment requires a warrant for all real-time location tracking – whether it is conducted through a GPS device affixed to a person’s car, or through location information generated via their cell phone or any other Internet-connected device.”

Interest: “Absent legal authority, the Court should not allow the government to forfeit untainted assets as an additional punishment for criminal conduct, particularly where, as here, doing so violates the language and purpose of the statute, undermines the separation of powers, and is contrary to the express intent of Congress.”

Interest: “This Court should grant review to make clear that states may, consistent with the Due Process Clause, categorically deny bail to a defendant when – after a full adversarial hearing – a court determines that the “proof is evident or the presumption great” that the defendant engaged in sexual intercourse or oral sexual contact with a child younger than fifteen.”

Interest: “In light of its mission and the reported experiences of its members, the Foundation has a strong interest in the public’s ability to exercise its First Amendment rights, such as the right to request information from government officials.”

Interest: Each of these scholars believes that the Court has relied on faulty statistics about recidivism as a basis to uphold unduly restrictive limitations on physical liberty.

Topic: Due process protections for carrying mother whether or not genetically related to child

Interest: “As the only organization that focuses on the impacts upon birthparents, including gestational carriers, in adoption or surrogacy situations, CUB has a direct interest in the outcome of this case. As CUB knows, mothers who surrender children for adoption suffer life-long, detrimental consequences.”

Question: “Whether the Seventh Circuit Court of Appeals erred in this case by holding that the National Voter Registration Act compels state Department of Motor Vehicle agencies to register non-citizens who present clear evidence of ineligibility”

Amicus: STATE OF UTAH AND THIRTEEN OTHER STATES.

Interest: “This brief explains why this Court should grant certiorari to clarify the burden of proof under the rule of reason in cases involving “two-sided platforms.” It also explains why the Acting Solicitor General’s failure to join the states’ petition should not dissuade the Court from addressing this important issue.”

Question: “Whether federal courts have jurisdiction over a claim under the Alien Tort Statute (ATS), 28 U.S.C. § 1350 , based on an injury that occurs abroad but that directly implicates U.S. interests and conduct by U.S. defendants”

Interest: “AHA and the Federation have long understood that patient safety must be hospitals’ first priority, and they and their members have long sought to foster the “culture of safety” that is essential to detecting and preventing medical errors. See 42 U.S.C. § 299b-21(5)(D). That is why AHA and the Federation supported the Patient Safety and Quality Improvement Act of 2005, Pub. L. No. 109-41 (2005), and that is why they advocated for the Secretary of Health and Human Services to promptly promulgate rules implementing the Act.”

Topic: “This case involves First Amendment protection for a campaign flyer in a hotly contested judicial election. As the challenger, Petitioner approved a flyer connecting two independent facts: that the incumbent attended an event at the White House and that, at the same time, his county reportedly lost coal jobs due to President Obama’s policies. On the flyer’s front were pictures of President Obama and the incumbent superimposed on a black background, surrounded by computer-animated streamers.”

Topic: misrepresentations and omissions under Securities Litigation Uniform Act of 1998

Topic: dismissing claims under the Securities Litigation Uniform Act when no allegation of misrepresentation or omission of material fact

Question: “Whether an Internal Revenue Service Notice of Deficiency, just like any other final agency action, is subject to the reasoned-explanation requirement of the Administrative Procedure Act.”

For those interested – certpool.com is a useful resource for cert level amicus brief coverage.

No longer in long conference: