Supreme Court oral argument is the setting where attorneys get to present their cases to the justices. It is a chance for justices to ask questions and for attorneys to convey important information; especially information that might not be contained in the briefs.  Oral argument also functions as a setting for dialogue.  In this respect, lawyers interact with the justices and the justices interact with one another.  The way that these interactions unfolds is often overlooked even though these may shape the content and context of the dialogue. A certain rapport is formed by the way the justices and attorneys engage in this dialogue that.  When initiated by attorneys, this can show justices that the attorneys care about what they say.  When initiated by justices, this can foster collegiality on the bench.  The instances I focus on in this post are when justices or attorneys specifically mention justices by name during their turns speaking.

The use of someone’s name in conversation is a subtle, yet powerful rhetorical device.  Looking across the thirteen oral arguments so far this term I found five ways to categorize how justices’ names are mentioned during oral argument.  These functions include: repeating or reiterating a point, responsive or polite uses of a name, deferring speaking opportunities to another actor, citing a justice’s opinion, or interposing one’s turn before another can speak. The first chart shows the counts of these uses across all thirteen oral arguments.

While the most frequent purpose of a mention was to repeat a point, responsive or polite uses of a justice’s name were not far behind.  One example of a polite or responsive use occurred during oral arguments in the case Artis v. District of Columbia. When responding to Chief Justice Roberts’ questions, Loren Alikhan begins:

The usage of Justice Roberts name in this instance signals that the attorney was attuned to the justice’s speaking turn and that her response was primarily directed towards him.  In the same set of arguments, attorney Adam Unikowsky provides an example of a mention reiterating a justice’s point or question: 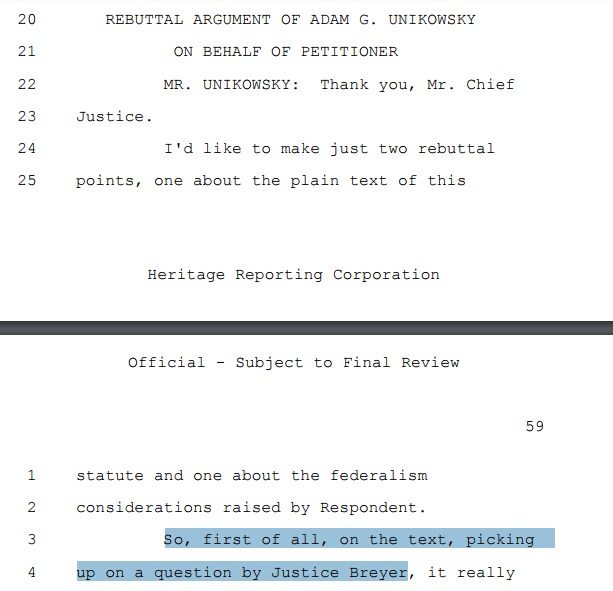 Here, Mr. Unikowsky brings the rebuttal back to one of Justice Breyer’s earlier questions that may not have been sufficiently answered. Similar to the polite/responsive example, this shows that an attorney or justice is paying attention to one of the justice’s specific points and regards this point as consequential.  This rhetorical device can be used to refer to a prior question or statement.

There is quite a range of times the different justices have been mentioned in oral arguments so far this term.  The following chart shows the number of times each was mentioned.

This chart shows that the amount a justice speaks during oral argument doesn’t perfectly correlate with the number of times a justice is mentioned (Justice Breyer has spoken the most at oral argument so far this term).  Granted, speaking at oral argument is almost a prerequisite for a mention as Justice Thomas is only mentioned twice and both times were to cite to one of his opinions.

One way to look at all of the relationships on one graph is to visualize the data as a network map.  This provides intuitions about the relative strength of individual mentioner/mentionee relationships. Such a map also shows the relative role of individual players in the overall data.  This map is “directed” in that it uses arrows to show which actor mentions which justice.  The relative thickness of the lines and arrows relates to the number of times one actor mentions another. 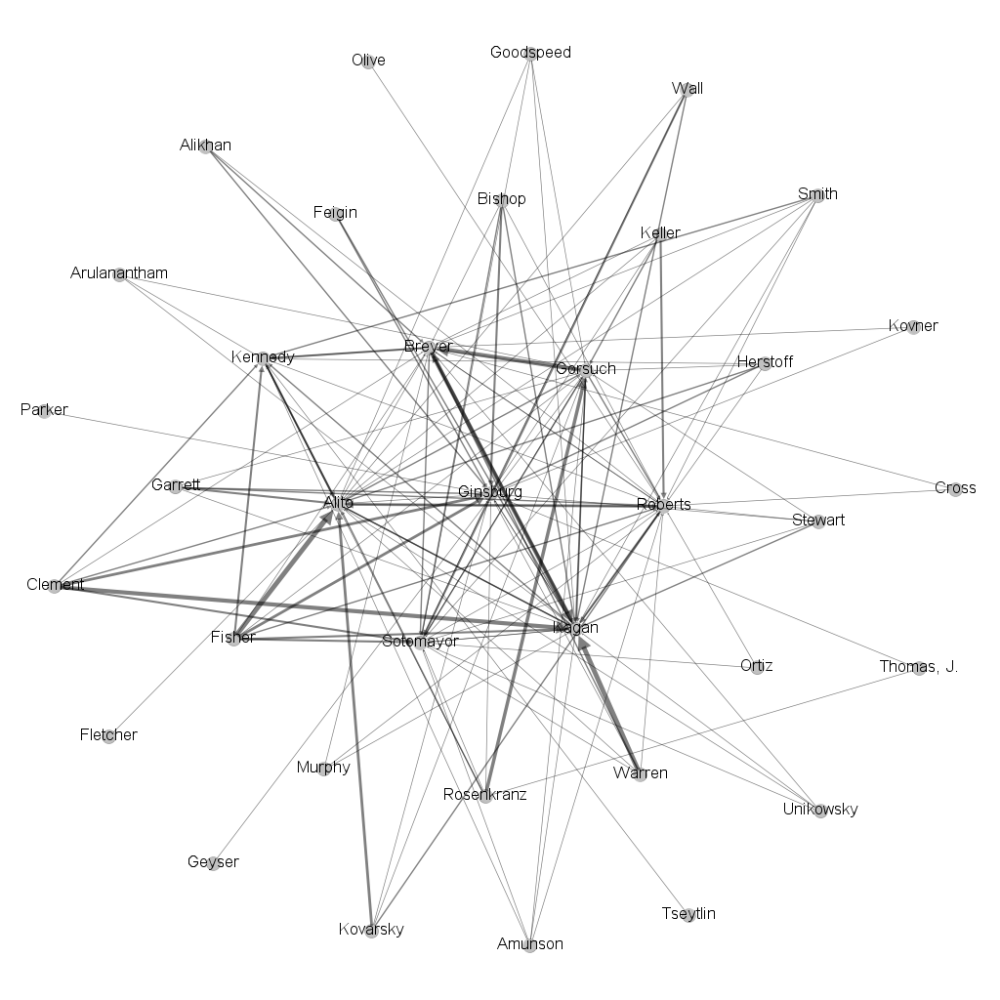 Although there is a lot to digest from this map, some relationships stick out.  Justices Kagan and Breyer, for instance, have a strong relationship in both directions showing that they like to mention each other.  Some attorneys have much more robust mentioning relationships with particular justices than with others.  Jeffrey Fisher who argued  for the petitioners in Jesner v. Arab Bank has an especially strong relationship with Justice Alito.   Paul Clement who represented the respondent in the same case has his strongest relationship with Justice Kagan.  Sarah Warren who argued the respondent’s position in Wilson v. Sellers mentioned Justice Kagan more than any of the other justices.

The next chart looks a bit deeper in how the justices were mentioned in the cases so far this term.

I was most interested in the relative amount of times a justice was mentioned for responsive/polite purposes versus for repeating/reiterative purposes.  Justice Ginsburg was the justice mentioned most with polite mentions and her overall number of mentions was largely skewed to this purpose.  Justice Gorsuch on the other hand was more often mentioned for the purpose of repeating or reiterating one of his points than for politeness purposes.  Justice Sotomayor split these two purposes evenly and Justices Kagan and Alito both had more polite than reiterative mentions.  Justice Alito was the only justice to receive an interposing mention in the arguments for Epic Systems v. Lewis when Justice Kennedy usurped one of Justice Alito’s potential talking turns: 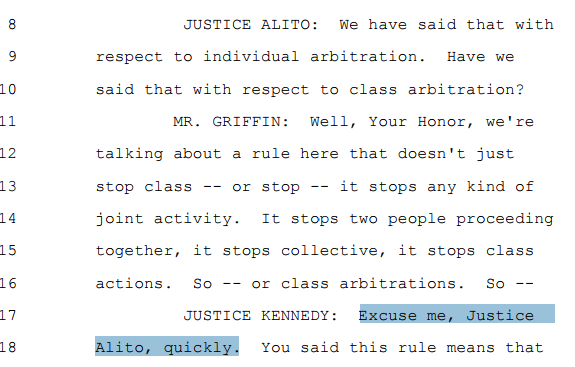 Focusing on the responsive/polite mentions between attorneys and justices, one theory is that there may be an underlying gender-based relationship.  With so few female attorneys though it is difficult to sort out significant gender differences.

In fact, the relationship seems perhaps more idiosyncratic with particular attorneys referring to specific justices more often and specific attorneys referring to the justices’ generally more frequently than others.  This bears out with the data.  The following chart shows the number of times each attorney and justice was a mentioner.  The purpose of the mention is reflected in the bar’s color and the thickness distinguishes justices from attorneys: 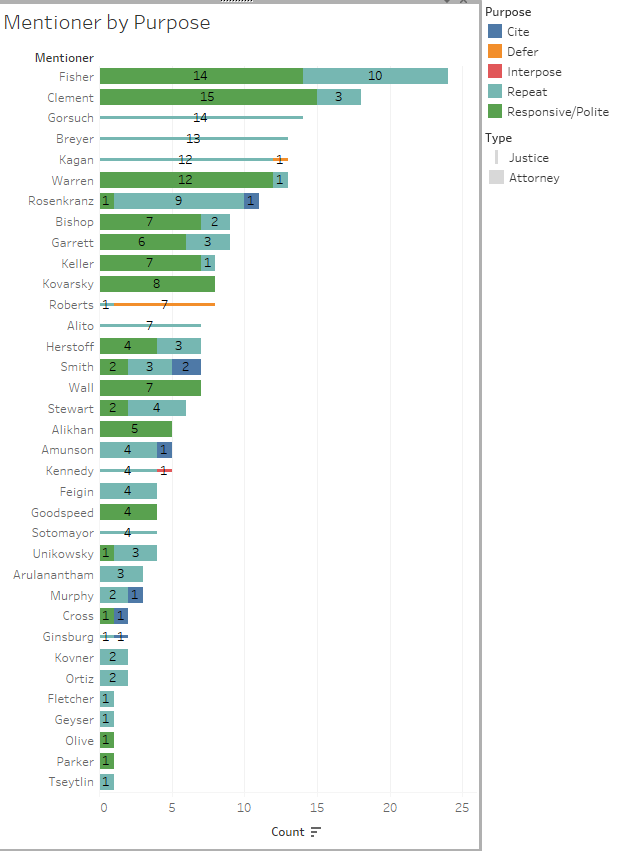 The most active mentioners were Paul Clement and Jeffrey Fisher, two of the most experienced Supreme Court attorneys that both argued in Jesner v. Arab Bank.  Mr. Fisher split his mentions fairly evenly between reiterative and polite mentions while Mr. Clement’s mentions were more often of the polite type.  Other attorneys who mentioned justices’ names often during oral argument include Sarah Warren whose mentions were predominately of the polite type and Josh Rosenkranz whose mentions were predominately used to repeat previous points or questions.

As Clement and Fisher, the two attorneys with the most outward mentions, both argued the same case this term it should come as no surprise that arguments in Jesner v. Arab Bank had the most overall mentions.  The chart below shows the number of overall mentions in each set of arguments. 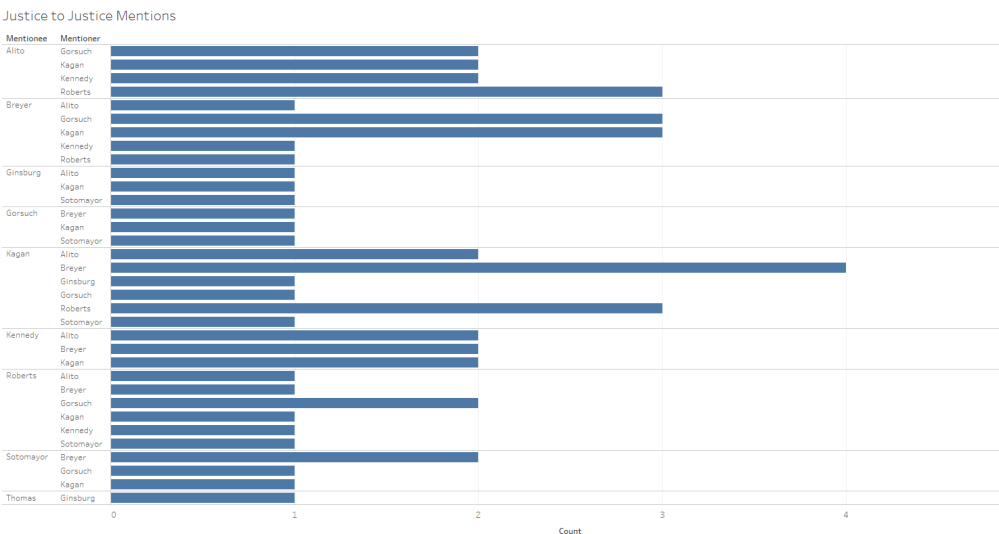 These findings provide a starting point for looking at how justices mention each other and at how attorneys mention the justices during oral argument.  It conveys the different purposes behind the mentions and the frequency that different actors are mentioners and mentionees.  Some patterns are clear in this data such as which attorneys mention justices most often, which justices are mentioned most by all actors, and the purpose behind which justices names are mentioned.  With more data this picture of the utility and strategy behind different types of mentions and the responsive behavior of the mentionee justices will become even clearer.