Yesterday the Court released a divided decision in Georgia v Public.Resource.Org with Justices Roberts, Kagan, Sotomayor, Gorsuch, and Kavanaugh in the majority and Justices Alito, Thomas, Ginsburg, and Breyer in dissent. As several folks pointed out, this was an interesting split of the justices since the majority was composed of the five younger justices on the Court and the dissent was composed of the four eldest members. This was particularly intriguing in a case dealing with copyright and technology as it suggests the inter-generational split might have something to do with views according to the justices’ ages. This was also intriguing because of how unusual it is to see the justices split in majority and dissent by their ages.

The last time this happened was in OT 1990 when four cases were decided by 5-4 votes with the coalitions split by age. In OT 1990, these justices were Kennedy, Scalia, O’Connor, Rehnquist, and Souter in the majority and White, Blackmun, Stevens, and Marshall in dissent. These coalitions make much more sense ideologically than split in Georgia v. Pubic.Resource.Org as the 1990 coalitions have generally more conservative justices in the majority and generally more liberal justices in dissent as shown below. 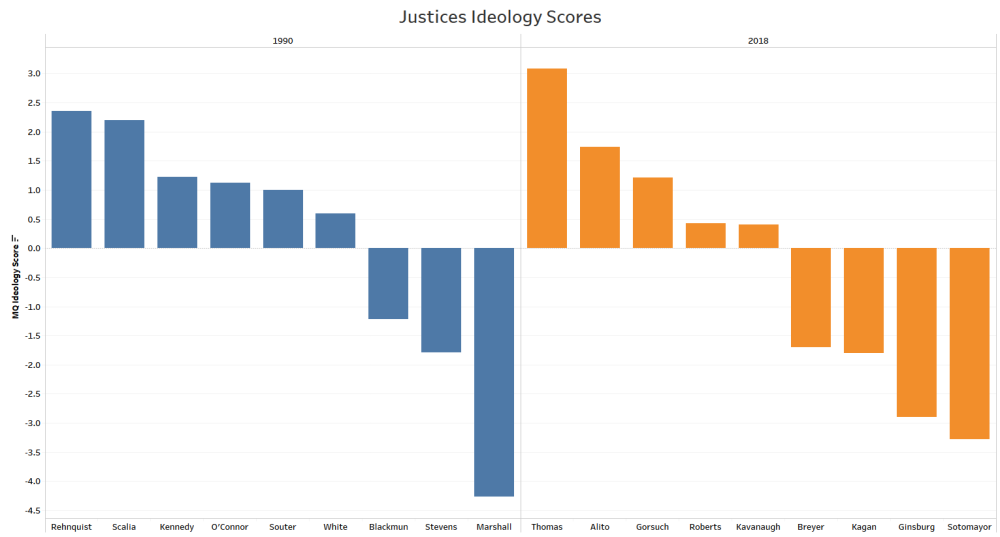 Between OT 1990 and OT 2019 this means that a number of justice compositions based on age were never in 5-4 majorities together when the older justices were in dissent. These include:

The four cases with Kennedy, Scalia, O’Connor, Rehnquist, and Souter in the majority in OT 1990 were:

Notice that three of the four cases are in the areas of criminal law.