This post analyzes the amicus filings from this past Term in three ways.  First it looks at counts of cert stage amicus filings and compares them to merits stage filings.  This difference show whether the interest in a case prior to the Court granting cert paralleled the interest in the case’s outcome on the merits.  Next it looks to the amicus filings supporting both parties in the same case.  This conveys the relative external support for each party as well as the differential in support between parties.  Finally, it looks at the Justices that wrote opinions in the cases with the most overall amicus filings as a way to convey the importance of the opinions the Justices authored to a population outside of the main parties to the cases.

Even though the Court seems to take fewer cases each Term, one item on the Court’s agenda that is not decelerating is the number of amicus briefs filed in most cases.  This Term, for example, seven cases had at least 40 amicus briefs with the cert and merits amici filings combined.  Cert and merits amicus briefs have different purposes though.  Cert-stage amicus filings are generally designed to influence to the Court to take cases both by showing that a case is important to actors external to the direct parties and by providing additional rationales for the Court to take a given case.  Merits amici, on the other hand, submit briefs to persuade the Court towards a certain outcome and/or to push a certain policy position important to the group filing the brief.

With different purposes in mind I first examined the cases with the greatest amicus action at the cert stage.  The following figure shows all cases with at least two cert stage amicus briefs filed this Term. 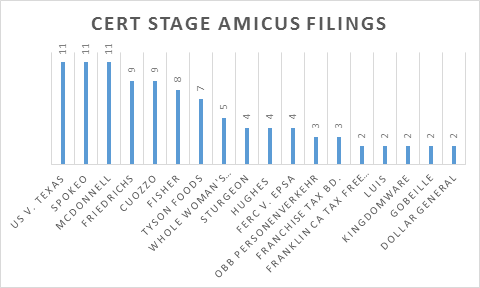 Curiously, while some of the most anticipated cases this Term were also highly supported prior to cert grants, others did not follow this trend.  Factors that may be involved include the speed with which the Court granted cert in a given case and the perceived likelihood of a cert grant without additional cert-stage amicus filings (or put another way the perceived utility of an additional amicus filing relative to the perceived cost of that filing).

As is evident in the table, the two cases that made both lists are U.S. v. Texas and Friedrichs, however the top three cases for merits amicus filings are not in the top five for cert amicus filings.

2. Relative Amicus Support on the Merits

Amicus support on the merits is often intended to sway the Court in one direction or the other.  Several studies present support for the correlation between relative amicus success and a party’s success on the merits (for example Kearney and Merill and Collins‘ works).

In this section I look at all of the cases this Term where one party had the support of at least six more amici than the other party.  This list includes 16 cases.  This section also examines whether the parties with the greater support tended to fare better on the merits.  The table below lists the cases along with the differential in amicus support and which party the differential favored.

Interestingly, in two of the cases, Hawkes and Williams, there were no amicus briefs filed on the merits for the opposing parties (the Petitioner and Respondent in those cases respectfully).

Of these cases, Zubik is the only one without a clear winning party (although the decision to vacate could be construed as a win for the petitioner).  If Zubik is removed, then the Court ruled in favor of the party supported by more amicus briefs in the first seven cases in this list (if Zubik is taken as a win for the petitioner then this becomes the first eight cases).  The Court only ruled opposite the wave of amicus support in three of these cases: Gobeille, Halo Electronics, and Kingdomware.  Thus in at least 80% of the cases with a high differential of amicus support this Term (those in the table above), the Court ruled in the same direction as was favored by the support differential.

As explained above, the cases with the greatest number of amicus filings each Term tend to be the ones perceived as most important.  Who would you expect to dominate the authorship of these cases? Well for those that track SCOTUS decisions with any regularity you may not be surprised that Justice Kennedy comes out on top.  Justice Kennedy not only wrote the opinion with the most amicus filings this Term (Fisher), but was also the only Justice to author four of the opinions listed above (Fisher, Gobeille, Montgomery, and Tyson Foods).  Justice Kennedy’s ability to affect close decisions continues to place him in often pivotal roles, which in turn tend to lead to more decision authorship in important cases.  While Justice Roberts has written many important decisions in the past several Terms, possibly for strategic reasons he took a backseat relative to many other Justices this Term.

This post shows that some key intuitions about amicus briefs gained further support this Term.  It also shows, however, that a shift in the balance of the Court could easily move authorship of the Court’s most important opinions away from Justice Kennedy.