Chambers and Partners regularly releases highly regarded law firm rankings and comparisons. One of these guides compares top appellate firms. The firms detailed in Chambers’ list are top players in the Supreme Court and employ many of the attorneys with the most extensive Supreme Court expertise. While these firms are recognized for their work in cases before the Supreme Court, their work at the cert stage is often overlooked (in a recent post I discuss how some of these attorneys take over cases at the cert stage). Like the Justices, however, these firms spend much time and energy with cases prior to decisions on cert.

So how busy are these firms on cert? In 2016 many already have a lot on their hands.  None of the petitions covered in this post have yet to be granted cert for full examination by the Court (several of these cases were decided based on GVRs (grant, vacate, and remands)). Due to statuses of these cases, they provide a good cross-section of these firms’ cert business separated from their work on cases already in the merits stage.

The firms in the first two “bands” of Chambers appellate practice rankings, which are the focus of this post, include – Band 1: Gibson Dunn, Sidley Austin, and WilmerHale; and Band 2: Bancroft PLLC, Jones Day, Kellogg Huber, Latham & Watkins, and Mayer Brown. These firms combine for 46 docket filings so far this year. Some are still pending a decision on cert, some were already summarily decided, while others were already denied cert. The 2016 petition counts for these firms are below. 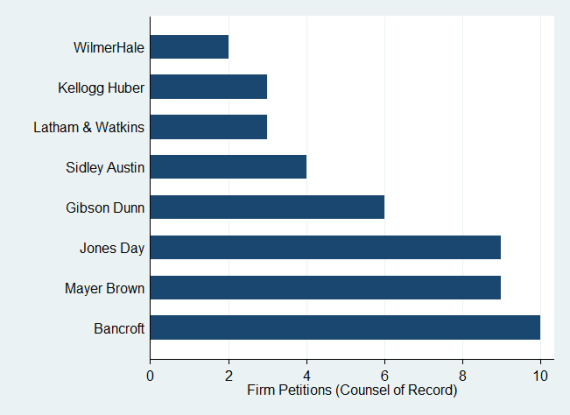 As an appellate boutique Bancroft almost wholly focuses on this these types of matters. It also is home to one of the most active Supreme Court attorneys Paul Clement. Aside from Kellogg Huber, the remainder of these firms are large and multinational. They also all employ some of the most well-recognized Supreme Court counsel. The focus not only on these firms but specifically on certain attorneys from these firms is conveyed in the following figure. 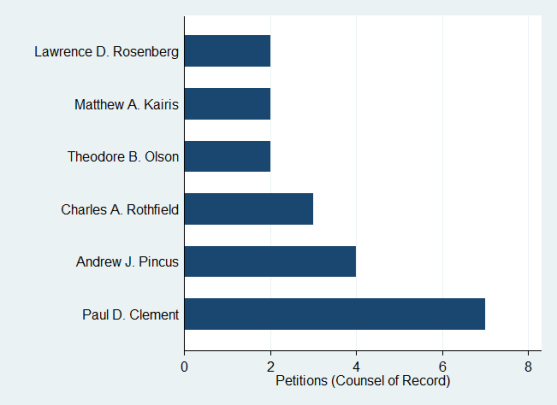 Paul Clement is attorney of record on far more petitions filed in 2016 than any of the other attorneys working at these firms. He is followed by two of Mayer Brown’s top appellate attorneys Andrew Pincus and Charles Rothfeld. Rounding out the attorneys for these firms that are counsel of record on at least two petitions filed in 2016 are Paul Clement’s predecessor as Solicitor General and Gibson Dunn attorney Theodore Olson as well as two Jones Day attorneys: Matthews Kairis and Lawrence Rosenberg.

The case from this set with the most amicus briefs already filed is Gillette v. California Franchise Tax Bd. The cert decision is still pending in this case handled by Mayer Brown’s Charles Rothfeld and dealing with Multistate Tax Compact. Of the other four cases in the figure, two were already denied cert (Leneuoti Faifia and Exxon Mobile). In the other two undecided petitions in Impression Prods. and Pennsylvania Higher Educ. the Court called for the views of the Solicitor General – another sign of a case’s cert-stage importance.

Although these firms handle a diverse swath of cases, at the cert stage petitioning parties often come to these firms and attorneys for their specialized expertise. This is one reason why they handle many of these highly regarded cert petitions.  This pattern is apparent with the 2016 petitions. 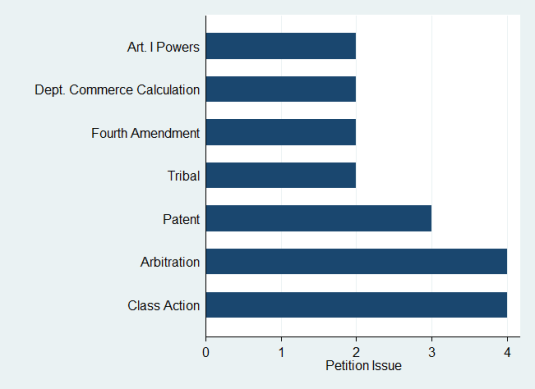 The most petitions from these firms so far this year are in the class action and arbitration areas with several patent petitions as well. As the Supreme Court took up at least one case in each of these areas last Term and one class action-related case is already on the Court’s merits docket for the upcoming Term, these appellate issues are quite relevant.

So far in 2016 Bancroft PLLC and Paul Clement appear to have the lion’s share of cert business. For all of the diversity of these firms’ work, the amicus briefs and the cluster of petitions in certain issue areas show that these firms are sought after and well-regarded for their specific as well as generalized expertise. While most of these cases will not end up leading to cert grants (several were already denied), this substantial cert business shows how parties continue to seek these firms for cert petitions, notwithstanding their high hourly rates and the low average likelihood of cert grants (for an extended discussion regarding attorneys’ and firms’ success at cert and how these firms tend to outperform their competition see my forthcoming paper).  With only a partially filled merits docket for the 2016 Term, the Supreme Court will likely grant cert in several cases with petitions from these firms including but not limited to those filed in 2016.

Figures in this post were calculated with LexisNexis searches for petitions from these eight firms filed in 2016.