On Tuesday the Justices heard oral arguments in the highly anticipated patent case, Samsung v. Apple.  With this case, the Justices wrestled with the question of whether Samsung infringed on Apple’s front screen and interface on the IPhone. The stakes are quite high as the appellate court upheld a $400-million verdict against Samsung.

While patent cases at their core deal with technical questions that come down to experts’ explanations, the gist of this case is whether the entire phone is protected or if a company can protect a specific part of the phone against infringement.  Highlighting the stakes of the case, two leading appellate attorneys represented the parties: Kathleen Sullivan for Samsung and Seth Waxman for Apple.  Waxman, a former United States Solicitor General, has been regularly identified by this blog as a successful repeat attorney before the Supreme Court.  Sullivan has a long history of complex appellate and specifically Supreme Court litigation as well as formerly serving as Dean of Stanford Law School.

Early commentary on the case suggests that the Justices may be willing to overrule the lower court’s verdict although possibly without clearly delineating the extent of patent coverage for a wide swath of cases.

Along with the attorneys for the parties, Brian Fletcher from the Office of the Solicitor General (OSG) participated in oral arguments.  The figure below looks how at who spoke when at oral argument. 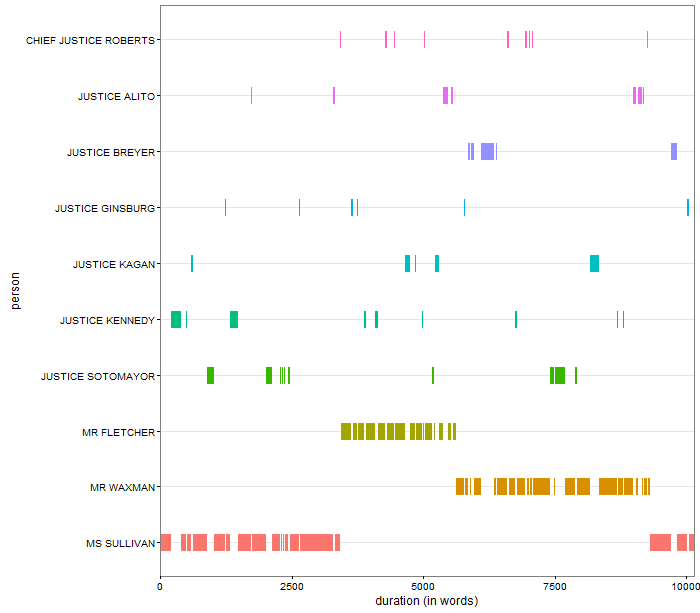 Below is a table that breaks down the overall amount the actors spoke (turns = talking turns broken up by actor, sentences = total sentences, and words = words spoken) 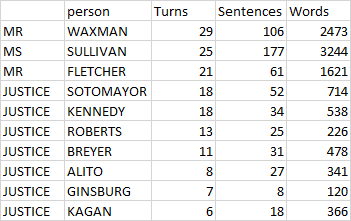 What did the Justices and attorneys specifically discuss? There are several ways to analyze this question.  Overall a visualization like the one below provides an easy graphical means to see some of the most common terms in the dialogue. The graphic has stopwords that lack relevance to the case removed (these include “a,” “and,” “the,” etc.). 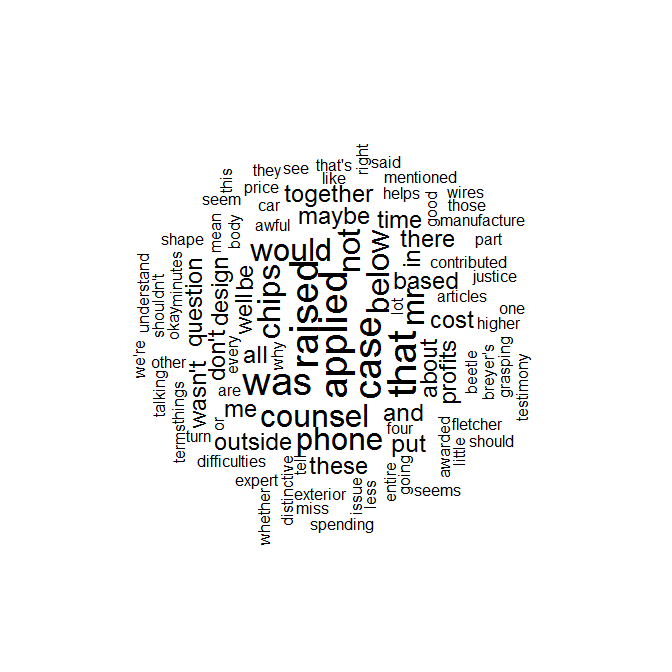 Not surprisingly, some of the terms that come up most frequently (largest in the graphic) are “applied,” “case,” “patent,” and “phone.”  These help to give a sense of the substance of oral argument.  Digging a bit deeper we can also see which actors used different terms in what amounts.  This is shown below.

The attorneys spoke most about “article” which relates to the patentable object.  All Justices mentioned this term except for Chief Justice Roberts.  “Manufacture” also came up regularly and of the Justices, Justices Sotomayor and Alito brought it up most frequently.  Looking at the attorneys, Seth Waxman put more relative emphasis on the “design” while Kathleen Sullivan put more on “phone” and “profit.”

A way to potentially gauge the Justices positions at oral argument is looking at when they ask questions.  Specifically, works including this blog have described how Justices tend to ask more questions to attorneys that represent parties they will vote against on the merits.  This is even more pronounced when the Justices ask many questions to one attorney and few to another.  The following table breaks down the Justices’ relative question and statement counts when Seth Waxman and Kathleen Sullivan were at the podium for oral argument. 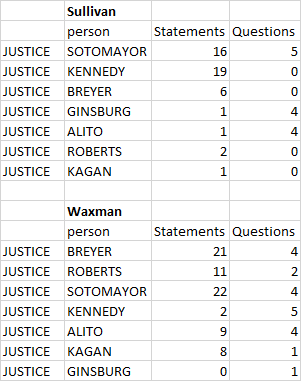 The Justices’ question counts do not clearly delineate how this case will play out.  Justice Ginsburg asked more questions to Sullivan implying the possibility that she is leaning towards voting against Samsung. Justices Breyer and Kennedy asked several more questions to Waxman implying the possibility they may vote against Apple.  Since we are not likely to see a resolution in this case for several months though, the Justices have plenty of time to shift their positions before they vote on the merits.