Supreme Court briefs are team efforts usually with a main coordinating partner/attorney who is known as the “counsel of record.”  Although the number of attorneys staffing briefs varies, at the Supreme Court level the number of attorneys listed on the brief is often more than five and can be upwards of ten.  This does not count the multiple associates who also had some hand in the finished product.  With so many hands on each brief it is a wonder they maintain their coherence as distinct pieces of writing. They do, however, and some more than others.

For many years, we have had metrics to judge the readability of texts. These metrics provide a some measure of the ease of reading particular documents usually based on measures of sentence and word lengths.  If the Justices prefer more readable briefs, then lawyers are incentivized to provide such work products.  This potential preference for easier to read briefs fits into the context of a longstanding debate in the law between writings in “plain English” versus “legalese.” Empirical work shows judges’ general preferences for writings in plain English (links to two of my papers on the subject can be found at the bottom of the post).

One complicating dimension in understanding the repercussions of different readability levels is that there may be other latent factors at work.  For instance, even if attorneys with more readable briefs tend to win cases more often, these attorneys may also have more experience, have stronger relationships with judges, or may pick cases where they have a strong likelihood of success.

While disentangling this mess of factors is beyond the scope of the post, the Justices themselves provide input on the subject.  In particular, Bryan Garner’s interviews with the Justices convey this sort of evidence.  Take for instance this dialogue with Justice Ginsburg (p. 141):

Garner: Do you think it would be a good thing if lawyers everywhere became more dedicated to trying to use plain English?

Ginsburg: I think it would be a very good idea, yes.

Garner: How would that affect the legal profession?

Ginsburg: For one thing, you would have much shorter documents than we now do. For another thing, the public would understand what lawyers do, what judges do, better. They might understand it even from reading an opinion or from reading a brief instead of getting it filtered through the lens of a journalist.

This issue also comes up with Justice Breyer (p. 156):

Garner: Do you have an opinion on legalese?

Breyer: I’m against it. Legalese — you mean jargon? Legal jargon? Terrible! Terrible! I would try to avoid it as much as possible. No point. Adds nothing. I’m sure there are some instances where there is a necessity for it, but I have not found one, or I can’t find many.

Garner: What does it say to you about a lawyer who uses a lot of that jargon?

Breyer: It would be helpful to me if he didn’t. And if he’s trying to disguise the fact that he has no argument, he’s not going to get away with that [laughter].

Both Justices clearly indicate a preference for plain English. With their words in mind the importance of brief readability should be clear.  There are over forty measures of text readability with some used more frequently than others.  One of the most commonly used indices is the Gunning Fog Index.  The Using English website describes this index:

For reference, the New York Times has an average Fog Index of 11-12, Time magazine about 11. Typically, technical documentation has a Fog Index between 10 and 15, and professional prose almost never exceeds 18.

The actual metric is calculated with the equation:

Reading Level (Grade) = (Average No. of words in sentences + Percentage of words of three or more syllables) x 0.4

I ran this index across 120 party’s initial merits briefs for this term to come up with the top ten most readable briefs.  First though a look at the range of Gunning Fog scores for the briefs from this term. 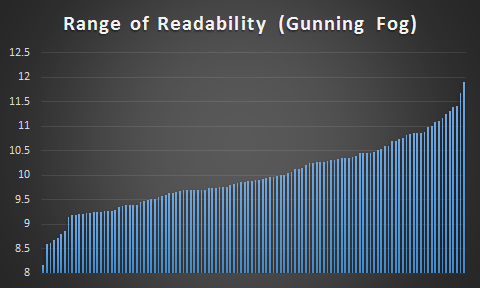 Below are links to the briefs starting with the most readable:

There are two attorneys with multiple briefs in this list – Neal Katyal (Hogan) with four and Josh Rosenkranz (Orrick) with two.  Other Supreme Court attorneys (and/ or attorneys generally) may wish to pay attention to the writing styles of these two experienced Supreme Court litigators.  Of course, there are other ways to parse this list of attorneys.  Three of these attorneys, Deepak Gupta, Neal Katyal, and Dan Geyser are regular legal Tweeters.  While the causal arrow is unclear, perhaps learning to write in 140 characters or fewer has assisted in these attorneys’ abilities to curtly synthesize complex points.  It is equally plausible that such writers are naturally drawn to Twitter (or that Twitter use has no correlation to good legal writing).

Here are links to a couple of articles I worked on looking at writing quality and attorney success (1) at the Supreme Court level and (2) in courts of first impression.

Readability measured with Quanteda in R