This post contains information on the split votes in the Roberts Court Justices’ first decisions’, the days between oral argument and their first decisions, and the lower court that ruled prior to the Supreme Court in each decision.

Of the justices on the Court (and Justice Scalia), three had non-unanimous first opinions.  Ginsburg had the most dissenting votes with three, Breyer had two, and Kagan one.  None wrote 5-4 majority opinions for their first (although two did for their second as is shown below). 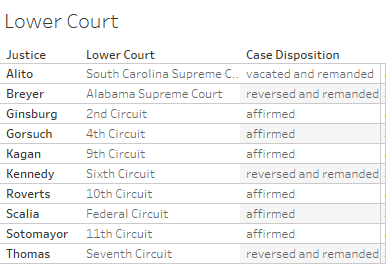 For the justices first majority opinions six affirmed lower court decisions, three reversed and remanded the decisions, and one (Justice Alito) had a vacate and remand.  All decided cases previously ruled on by federal courts of appeal except for Justices Alito and Breyer who decided on cases previously ruled on by the South Carolina Supreme Court and the Alabama Supreme Court respectively.

Below these figures are links to each of the justices’ first majority opinions and the first decisions where each wrote for the majority with 5-4 split votes.

We’ll see how Gorsuch’s first 5-4 majority opinion looks either at the end of this term or (likely) sometime during the next.

With Data from The United States Supreme Court Database