Now that the Supreme Court term is over, let the scoring begin.  While this post looks at the most successful firms, litigators, and groups before the Supreme Court during the 2016 term, there are several caveats to note.  First, this post looks at success before the Court as measured by win counts. Second, getting to try a Supreme Court case is a “win” in and of itself in many respects, especially before a Court that hears so few cases each term.  Third, because the Office of the Solicitor General (OSG) is not on a level playing field with the rest of the advocates before the Court (as it represents a branch of the federal government), this analysis excludes the OSG’s participation.

At the Supreme Court level, there is some agency on behalf of the litigator, but much of the case is already etched in stone.  The facts have been established in the lower courts.  The questions of law are already on the justices’ radars.  The justices’ themselves may have a good sense of how they will decide in cases based on these already assembled materials.  This is where the lawyering comes in.

Good lawyers are selective in the cases they take and the sides they defend with an eye towards the strategy of how to translate the established facts and law into winning arguments.  In an earlier post I examined the playing field of participants before the Court this term.

That is not to say that even the best Supreme Court lawyers don’t lose cases.  In the same way that lawyers can have a great case before them, they may have to defend untenable positions for certain clients.  Without input from the justices (perhaps even with this input) it is impossible to separate out the portion of a win that is a product of good lawyering and the portion that is a product of positions in cases themselves.

Since there is inherently some level of chance (although sometimes very low) in the outcome of Supreme Court cases, lawyers, firms, and groups with multiple victories in a Supreme Court term are notable for overcoming these odds.

The upper bound for wins for a merits attorney this term was four.

Jeffrey Fisher, Neal Katyal, and Adam Unikowsky were the top performing attorneys this term with respect to merits victories.  Jeffery Fisher from Stanford Law School’s Supreme Court Clinic accumulated four wins this term for his representations in Endrew F, Pena-Rodriguez, , Esquivel-Quintana, and Microsoft v. Baker.  He also won all cases he tried this term.  Mr. Fisher is no stranger to success before the Supreme Court both on the merits and for getting cases to the Court on cert. 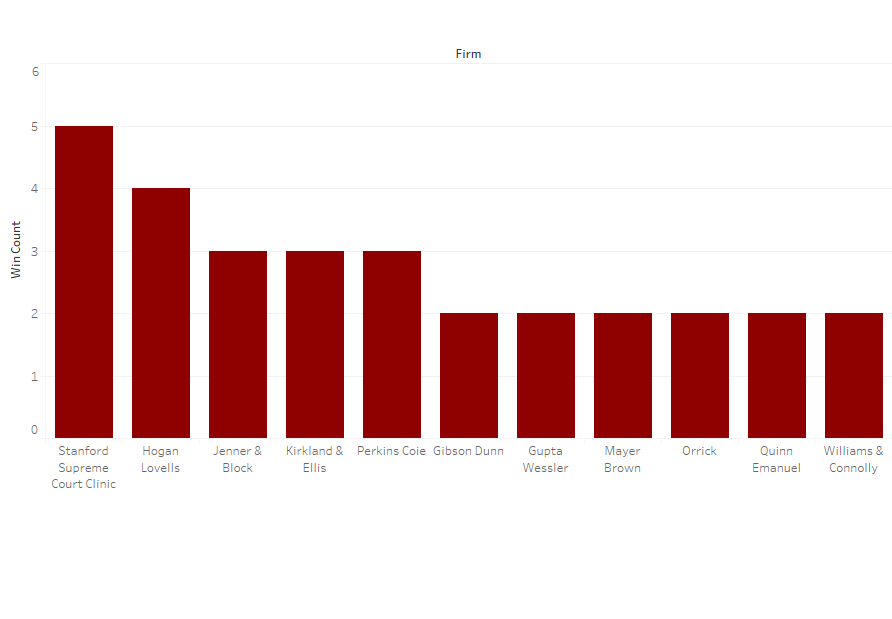 Next to the amicus participants.  Several attorneys filed briefs on behalf of winning parties in multiple cases.

The winningest amicus attorneys were Brianne Gorod, Andrew Pincus, Ilya Shapiro, Paul Clement, and Richard Samp.  Gorod filed briefs supporting the most winners this term with six.  Pinus with five is also notable as he is the only attorney this term to be recognized both for merits and amicus success.  Shapiro with the Cato Institute regularly files many amicus briefs before the Court.  Even in a year where Paul Clement, a top advocate before the Supreme Court, did not win multiple merits cases he is recognizable for the four amicus briefs he helped file that supported winning parties.  Clement and Pincus both work in specialized Supreme Court practices and regularly participate as merits as well as amicus representatives.

[As a side note for #appellatetwitter followers, JP SchnapperCasteras submitted an amicus brief on behalf of the NAACP-LDF on the winning side of Pena-Rodriguez and Carl Cecere had briefs supporting winning parties in Samsung v. Apple and in Expressions Hair.] 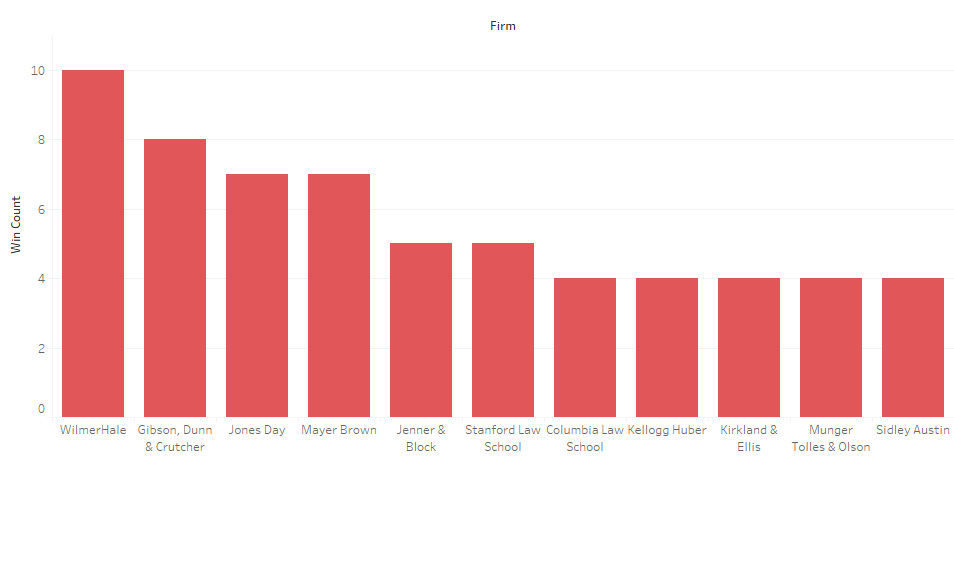 At the top for amicus success were WilmerHale, Gibson Dunn, Jones Day, and Mayer Brown.  These firms all participated on the merits this term as well as representing amici.  Two law school clinics, Stanford’s and Columbia’s, also represented amici that supported winning parties in at least four cases this term.

Finally looking at amicus group success, there were a few groups that filed briefs supporting many winning parties. 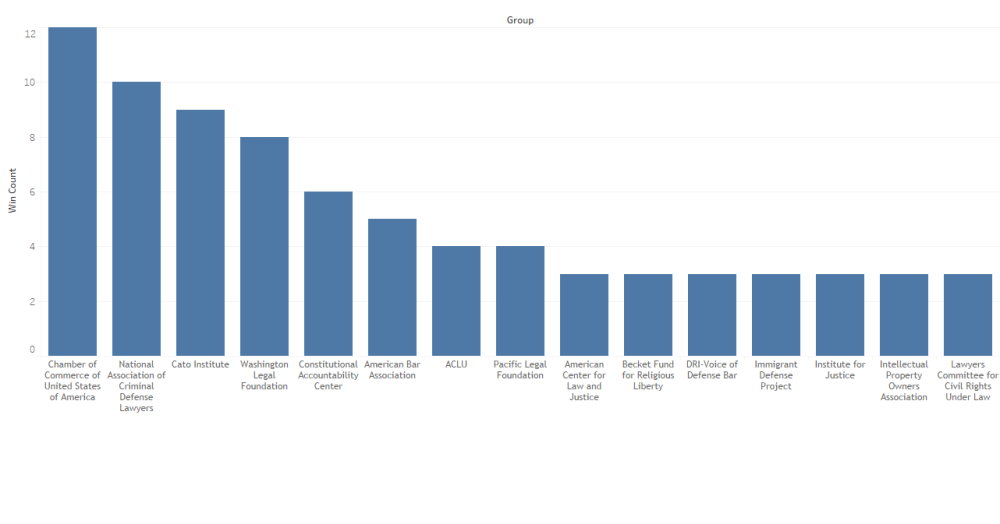 The U.S. Chamber of Commerce supported the most winning parties this term with twelve.  As UCLA’s Adam Winkler noted, this was a successful year for big business and for the Chamber of Commerce in particular before the Court.  The most successful amicus groups after the Chamber of Commerce were the National Association of Criminal Defense Lawyers (NACDL) which was associated with ten wins, the Cato Institute with nine, the Washington Legal Foundation with eight, and the Constitutional Accountability Center with six (Brianne Gorod was counsel on all six winning briefs for the CAC).

While this was an unusual term in many respects, especially with eight justices until the last month of oral arguments, the Roberts Court had its consistencies.  We still saw many elite Supreme Court attorneys and firms with multiple wins.  Big businesses tended to flourish before the Court. Amicus support, although not what it has been in years’ past was still quite heavy on a case-by-case basis.  With an already impressive slate of cases for the 2017 term we can expect to see more of these experienced Supreme Court attorneys, firms, and amicus groups in the year to come.