Supreme Court scholars often debate the role of lawyers in Supreme Court decision making.  For an attitudinalist, the justices’ preferences make all (or at least most of) the difference.  According to this theory justices will often vote based on their preferred policy direction, which minimizes the role of advocacy.  More recent studies show that such a view, however, might obscure the impact lawyers have on Supreme Court output.  Surprisingly, these two views are not necessarily mutually exclusive.  One way to blend them is with the idea that attorneys also signal particular positions to the justices. If certain repeat Supreme Court attorneys take similar positions before the justices over time, the justices might presuppose such associations in advance of reading an advocate’s argument in the form of a brief.

While governmental attorneys are expected to advocate certain policy positions, non-governmental attorneys have more leeway in the positions they take. They also though may come back to similar positions in cases time and again.  Among other things, this could be related to constraints at the firm level, to their own selection decisions, or to repeat clients’ requests.

In a 2015 study, Professors Adam Bonica, Adam Chilton, and Maya Sen constructed a data-backed account of how attorneys’ preferences matter as well.  An even stronger argument could be made for attorneys’ signaling effects if top Supreme Court attorneys not only hold specific policy preferences, but tend to argue certain positions that align with these positions.  Of course attorneys do not have unlimited agency in case before the Supreme Court, as many of the legal issues are generally resolved by the time a case gets to the US’ highest Court and justices aren’t likely to vote for a weak legal positions even if it accords with their policy preferences.

How can we discern whether particular justices are more or less partial to certain attorneys’ or firms’ positions in the aggregate?  A cut at this involves matching justices’ votes with these attorneys and firms over a number of years. A previous Empirical SCOTUS post examined the most successful attorneys between the 2013 and 2017 Supreme Court terms. This post links that data with justices’ vote data from the Supreme Court Database to assess justices’ voting relationships with specific attorneys.

These relationships between the justices and attorneys are apparent at the governmental level when looking at justices’ votes between the 2013 and 2017 Supreme Court Terms.  The following graph shows OSG attorneys with at least 30 total votes from the justices for these terms. 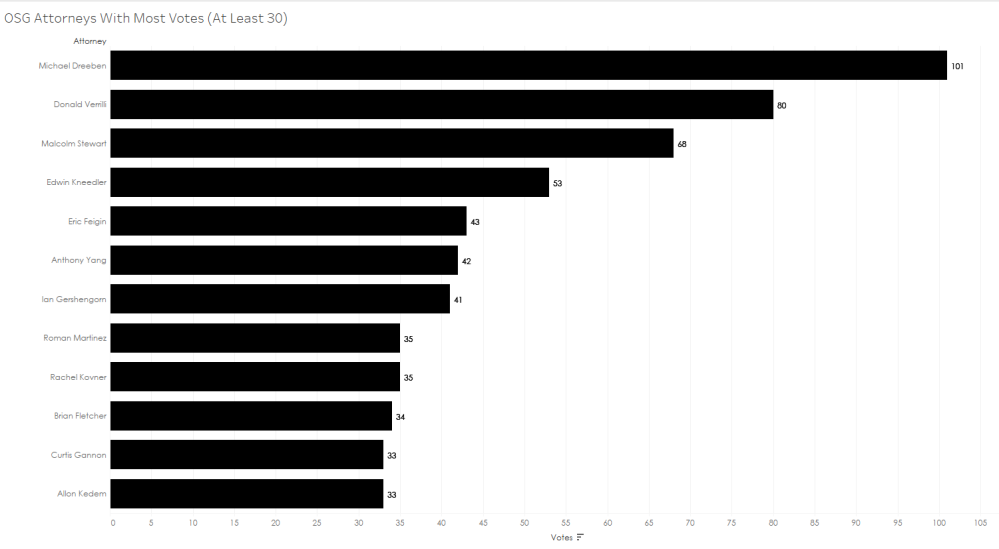 Career Department of Justice litigators Michael Dreeben, Malcolm Stewart, and Edwin Kneedler are three of the four attorneys who received the most votes. Former-SG Donald Verrilli received the second most votes after Dreeben. 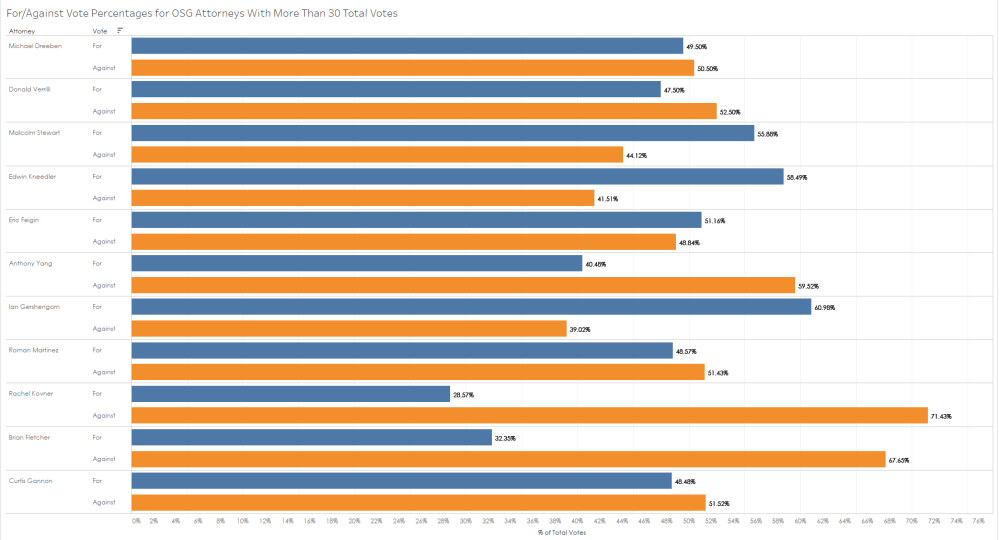 The justices voted more frequently against several of the attorneys with the most votes, including Dreeben and Verilli, than they voted for these attorneys. The most successful attorneys based on these cumulative voting percentages were Obama SG Ian Gershengorn and the previously mentioned Edwin Kneedler.

The next graph focuses on the attorneys with at least 50% “votes for” in the previous graph (a 50% vote for share or more) and looks at their relative support from individual justices. The attorneys are organized based on their relative vote share, from greatest to least. 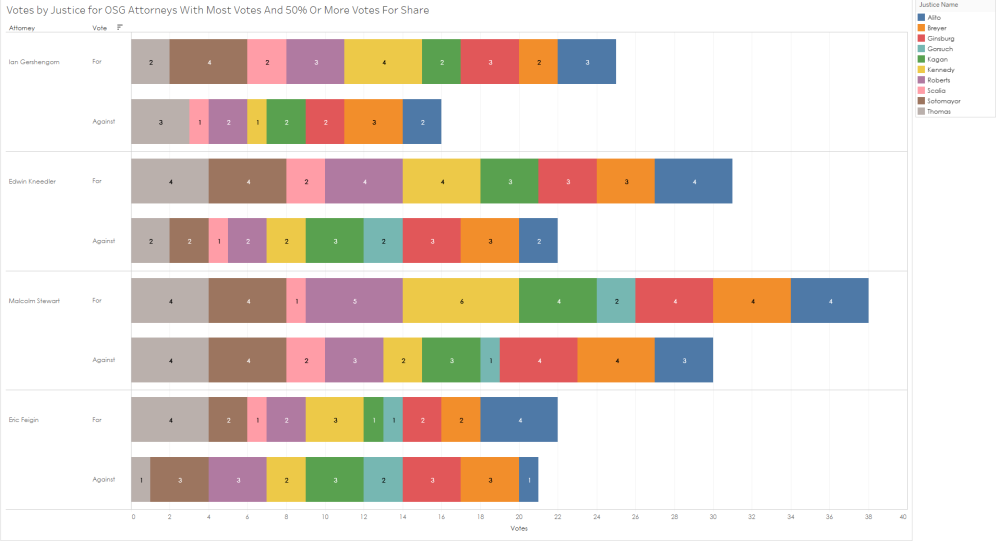 Only four of the 11 government attorneys in the earlier graphs had vote shares of 50% or more. The justices’ votes were more polarized for some of these attorneys than others. Ian Gershengorn, who received the highest positive vote share with almost 61% received balanced votes from most justices. Thomas and Breyer were the only justices to vote against him more often than they voted for him. Sotomayor and Kennedy were the most supportive of his positions with Sotomayor voting in his favor in all four instances she voted and Kennedy voting in his favor in four of the five cases Gershengorn argued before him.  Kneedler similarly performed well across justices with no justice voting against his positions more frequently than they voted for his positions aside from Gorsuch.  Stewart saw the greatest positive vote differential from conservatives Roberts and Kennedy. Feigin received more support from conservatives Alito and Thomas than he did from liberals Kagan, Ginsburg, Sotomayor, and Breyer.

Repeat Supreme Court attorneys tend to have a good sense of what makes a winning arguments before certain justices.  They need to find ways to cobble together arguments supported by at least five justices though, and the ability to do that varies by case and by position. Savvy veterans know or learn how to do this with regularity, but also can distinguish between a winning argument from a losing one. Sometimes a repeat player’s job will be to push a certain position on an issue before the justices so that even if the attorney knows that an argument will ultimately fail, at least certain justices will be likely to focus in on that argument in a dissent.

Two things that are potentially in an attorney’s control are whether to accept a case or not and how to argue a position.  Attorneys may lose justices’ votes at either level and this is a necessary takeaway from looking at attorneys’ success across justices’ votes.  Attorneys that win a high percentage of justices’ votes may take easier positions to win or make more compelling arguments. There is little ability to distinguish between the two when observing at the vote level.  When attorneys are successful with such regularity that they garner a high percentage of votes in more than two or three decisions though, this shows an ability to forecast the Court in a unique manner.

The graphs looking at attorneys start by isolating the attorneys with at least 35 votes across justices between 2013 and 2017. 25 attorneys fit within this parameter. 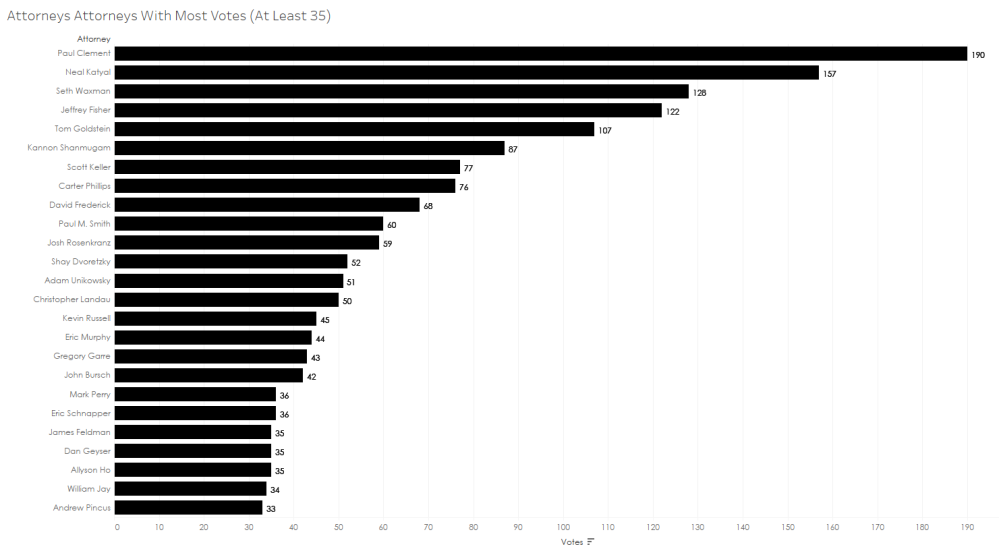 The names at the top of this list include some of the most prolific Supreme Court attorneys in the history of the Court. The top three attorneys in terms of total votes for this period — Clement, Katyal, and Waxman – each served as the United States Solicitor General. The next several attorneys on this list vary in their type of practice from Supreme Court clinic attorney (Stanford’s) Jeffrey Fisher, private big law appellate practice attorney Kannon Shanmugam, boutique law appellate practice attorneys Tom Goldstein, to state government representative Scott Keller who is now back in private practice.

Many repeat attorneys do not string together votes at the Supreme Court. This may be due to the fact that more complex cases have outcomes that are hard to predict. Attorneys might end up with a lower average favorable vote from the justices based on several close cases with one or two unanimous losses just as attorneys may end up with higher averages through one or more unanimous victories.  Attorneys’ percentages of favorable votes across the justices are shown in the following graph. 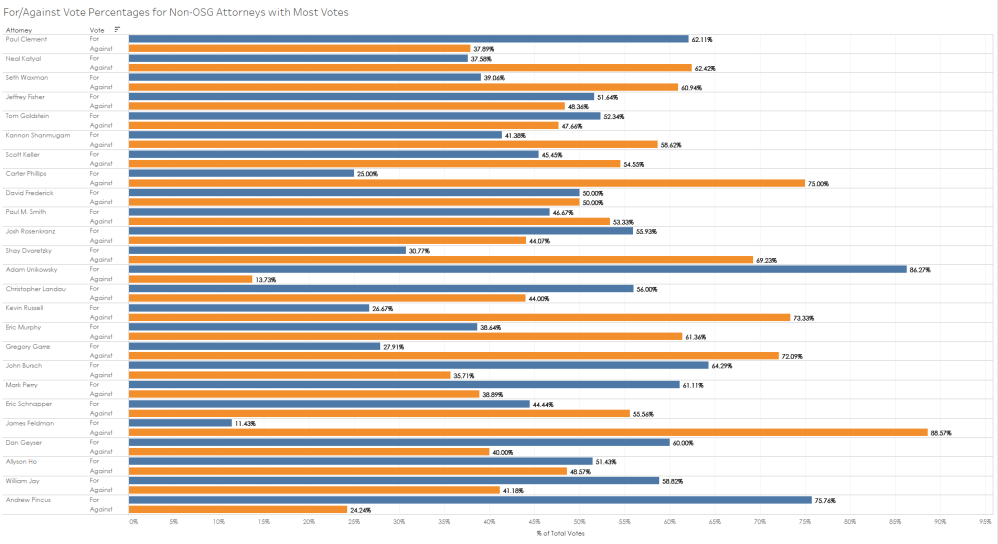 13 or just over half of these 25 top Supreme Court attorneys averaged at least 50% favorable votes from the justices across their cases.  The next graph shows votes for and against these attorneys’ positions by justice. 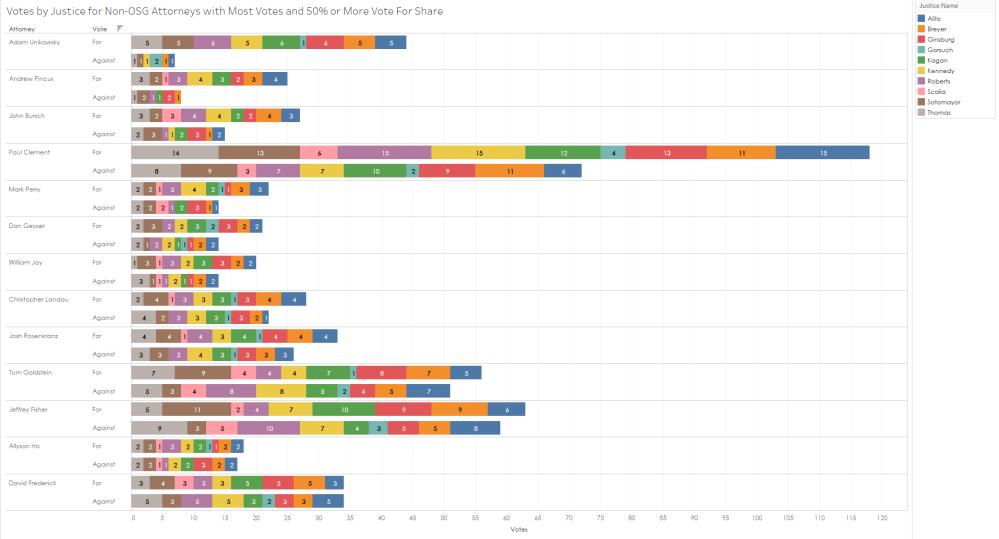 As with the previous graph showing votes by justice, the above graph is organized in order of attorneys with the highest overall vote for share across the justices.  Unikowsky with the highest overall percentage did well across all justices with more votes in his favor (and generally several more) from all justices except for Gorsuch. Ginsburg, Kagan, and Roberts voted for Unikowsky’s positions on all six occasions when he argued.

The most active firms for this period were often a product of multiple attorneys’ efforts with generally one veteran advocate that took the majority of argument opportunities for the firm. The graph below shows firms with at least 50 votes from the justices for the 2013 through 2017 terms. 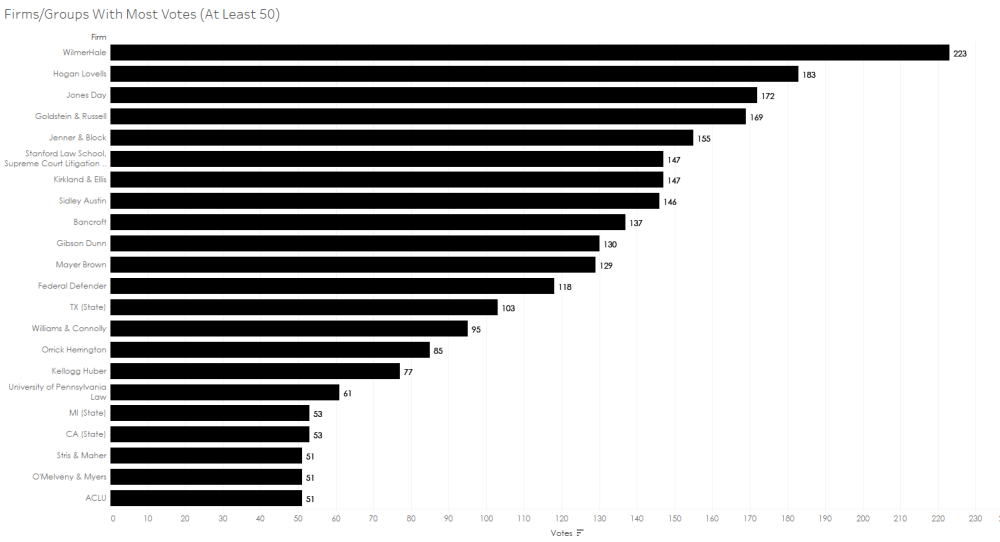 WilmerHale had by far the most justice votes with 223. Seth Waxman argued the majority of these cases but had support from Mark Fleming, Danielle Spinelli, and Thomas Saunders among others.  Hogan Lovells received the second most overall votes with Neal Katyal arguing the majority of the cases although cases were also argued by Catherine Stetson, Frederick Liu, and Dominic Perella.

The next graph tracks the justices’ support percentages for each of these firms. 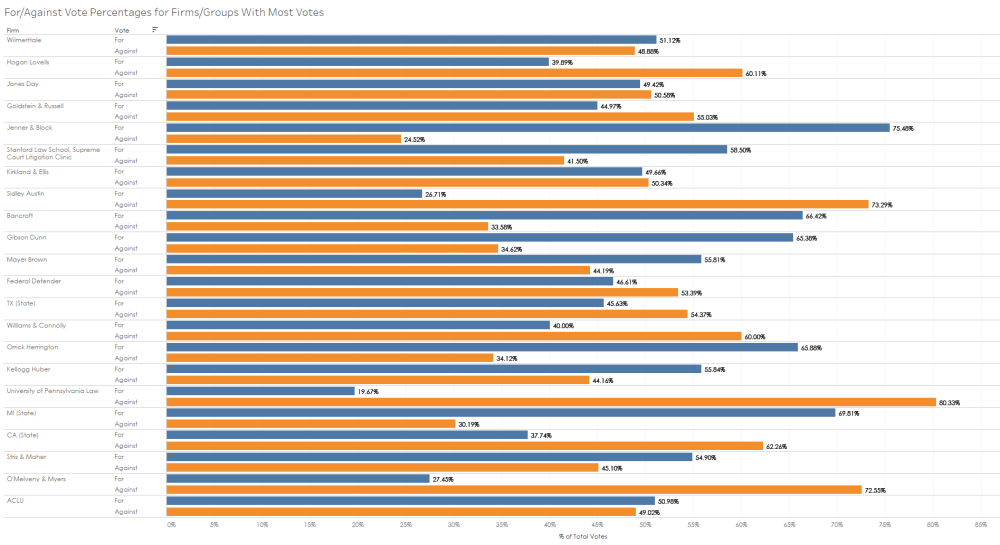 Driven by Adam Unikowsky’s success in the Court, Jenner and Block is the top performing firm in terms of percentage of overall justices’ votes.  Nine firms along with Jenner received at least 50% vote for share from the justices. These ten firms are included in the next graph breaking down firms by justices’ votes. 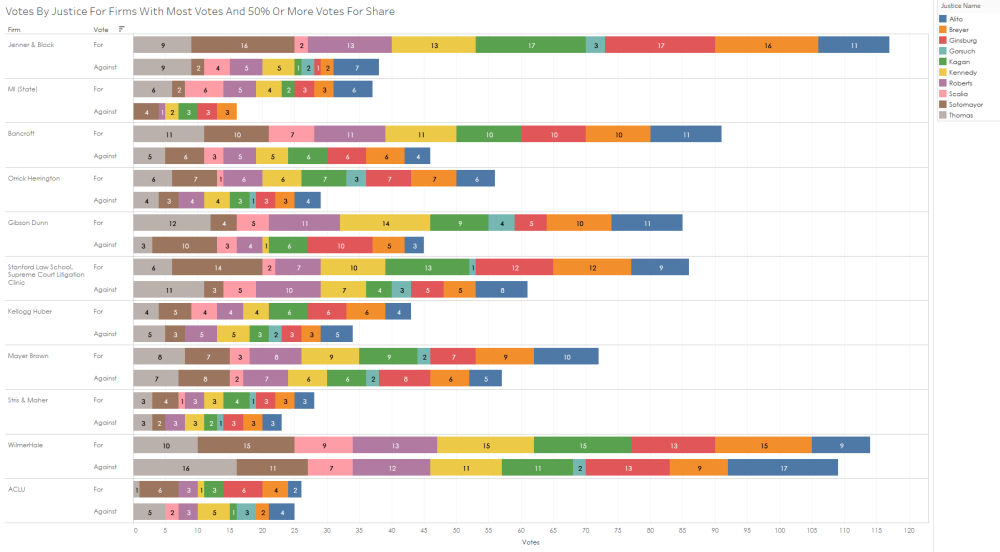 The support from particular justices is evident with many of the firms on this list. This appears to be the case more so than it was with the individual non-governmental attorneys.  Jenner and Block was able to pull together fairly strong support across justices though, with Scalia the only justice voting against the firm’s positions more often than he voted for them and Thomas voting an equal number of times for and against the firm’s positions.  Michigan’s OSG was able to pull strong support, especially from the Court’s right wing. Thomas, Alito, and Scalia each voted unanimously for the Michigan OSG in all six cases its attorneys argued before the Court.  Sotomayor and Kagan were more frequently opposed to the Office’s positions than they were in support of them.

The next set of firms, Bancroft and Orrick Harrington, pulled support across justices with all justices voting for their positions more frequently than they voted against them.  Going a bit deeper into this list we see more ideological divisiveness from the justices. The republican nominated justices, Thomas, Scalia, Roberts, Kennedy, Gorsuch, and Alito all strongly supported Gibson Dunn’s positions while Sotomayor and Ginsburg each voted against Gibson’s positions at least twice as frequently as they voted for them. On the other end of the ideological spectrum, liberal justices Sotomayor, Kagan, Ginsburg, and Breyer along with Kennedy showed strong support for Stanford Law School’s Supreme Court Litigation Clinic’s positions while all more conservative justices aside from Kennedy and Alito voted against the Clinic’s positions more frequently than they voted for them.