Every year, SCOTUSBlog’s Stat Pack provides readers with an unparalleled look at the business of the Supreme Court across all of the merits cases it hears during a term. This year was no exception. The 2018 Term Stat Pack examines the details of the 67 cases the Court decided this term after oral argument as well as the Court’s five summary reversals. Some of the most interesting facets of the justices’ work this term relate to the Court’s closest decisions in 5-4 and 5-3 splits (both will be referred to as 5-4 decisions in this post) where a single vote could change the coalition in the majority.  This post highlights differences that we saw in this, the first term after the retirement of Justice Kennedy, from past terms, and follows the trajectories of the justices’ decisions in such cases across the Roberts Courts’ 14 terms so far. 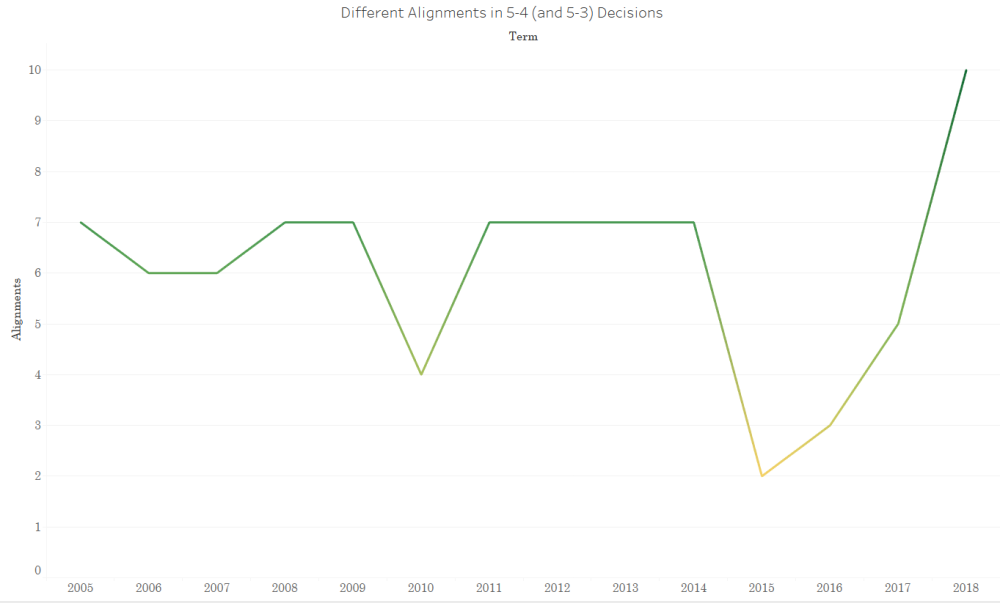 The ten alignments this term is up from five in the previous term and a previous high of seven since 2005. This was also the first time since Roberts joined the Court that we have seen each of the five more conservative justices vote with the four more liberal justices in five-justice majorities.  In Gundy v. United States, Alito took on this role for first time since he joined the Court in 2005.  Interestingly, each of the more liberal justices also voted in coalitions this term where they were the lone liberal in the majority.

For the purpose of this post, O’Connor/Alito, Scalia/Gorsuch, Thomas, Roberts, and Kavanaugh are coded as conservative justices. Kennedy is not treated as a conservative or liberal justice but rather as a potential swing vote in either direction. Souter/Sotomayor, Stevens/Kagan, Ginsburg, Breyer, are coded as liberal justices (this left-right dichotomy is captured by multiple different metrics including Martin-Quinn Scores). A swing justice is counted when four conservative or four liberal justices are in the majority along with one member of the opposite ideological grouping or Kennedy who is coded as neither liberal nor conservative.  The next figure shows each of the justices swing votes between the 2005 and 2017 Supreme Court terms. 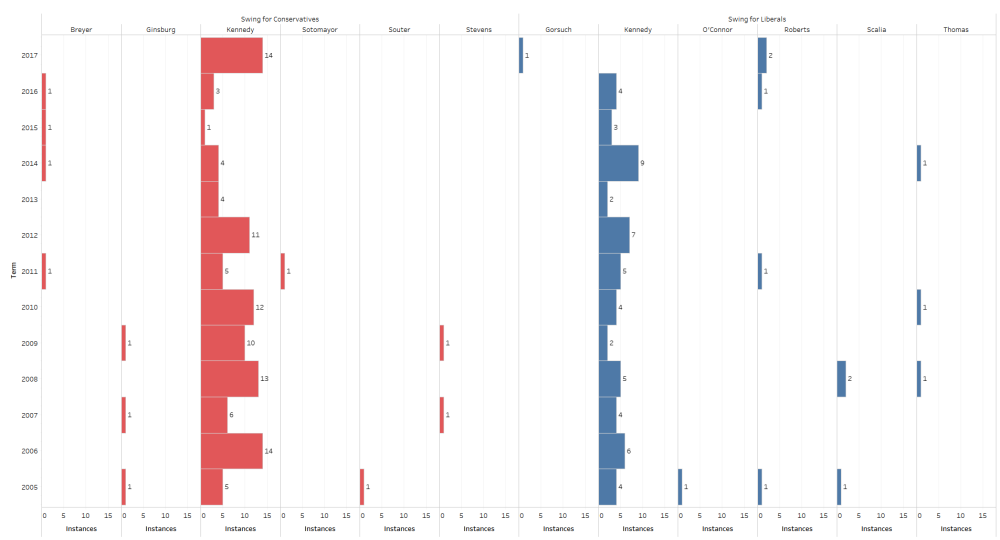 If the the majority Department of Commerce v. New York is treated as Roberts with the four more liberal justices, then coalitions with liberal justices fall just below the 50% mark in the 2018 term with 45%. Conservative coalitions were at half of their rate from 2017 during the 2018 term with 35%. This marks the fourth term since 2005 as well as the fourth term over the past five where a higher percentage of liberal coalitions were in 5-4 majorities than conservative coalitions.

When we look at majority opinion authorship in 5-4 decisions though, Roberts wrote the largest percentage of these of all of the justices at 36%.

Each of the justices aside from Kavanaugh (who was in his first term in on the Court in 2018) had terms with higher frequencies in the majority in 5-4 decisions than they did this term. Gorsuch who was at the top of this metric this term was still in the majority nearly 20% more of the time last term.  Roberts’ highest frequency was actually last term at 90%.

Focusing on the fraction of majority opinions authored by each justice in 5-4 decisions out of all 5-vote majority decisions for the term, both Roberts and Thomas authored a greater percentage of such opinions than they have in previous Roberts Court terms at 36% and 33% respectively.  Note that the justices no longer on the Court are not shown in this figure although their respective percentages (especially Kennedy’s) are what keeps the aggregate 5-4 decision authorship by term below 100%.

The Court with Kavanaugh is distinctly different from the Court with Kennedy. There is no longer a clear swing vote.  Justices like Gorsuch have shown willingness to side with the liberal justices in certain case areas, but this will likely only manifest in a limited set of cases each term.  This term it was apparent that all justices may be attempting to reinvent their identities, at least to some extent.  We can see this reinvention in the Court’s 5-4 decisions where justices appear to be willing to make concessions to reach a consensuses.  Still, the justices’ positions on different ideological poles are quite evident as the coalition most frequently in the majority in 5-4 decisions was composed of the five more conservative justices who voted together in seven of these decisions.  This fracture between justices was especially evident in the Court’s decision on partisan gerrymandering in Rucho v. Common Cause.

With a bevy of contentious cases on the horizon dealing with issues ranging from the Second Amendment, to DACA, to Title VII discrimination against transgender individuals we should continue to see the justices split predictably in certain issues while while might expect some surprises as the justices seek to find consensus in ways they never needed to with Justice Kennedy on the Court.

Learn more about Empirical SCOTUS and ways to connect here.