The current presidency has been one of the biggest political roller coasters of modern times. Terms like “emoluments” that have not been bandied about in several hundreds of years have become verbatim.  Seldom is there a time when the cover story in any major news media does not involve President Trump.  While calls for impeachment have ebbed and flowed since Trump took office, they appear to have grown in tenor in recent weeks since a whistleblower described Trump’s interaction with Ukrainian President Volodymyr Zelensky attempting to direct the Ukrainians to investigate political rival Joe Biden’s son, Hunter’s role working with a Ukrainian company.  This whirlwind will not die down anytime soon.

As this ongoing political maelstrom continues to swirl and even pick up pace, discussions of changes to the federal judiciary have become less central to the daily news digest. That said, the federal courts still may be the central locus where much of Trump’s political drama plays out. The other day, the D.C. Circuit Court of Appeals for instance ruled that Trump could not block a subpoena for his tax returns. One of Trump’s appointees, Judge Neomi Rao, dissented from the court’s decision.

The impact of Trump’s nominees will be felt long after he leaves office. With life tenure on the courts, Trump’s federal court appointees will sit on the courts for decades to come, making decisions that affect the nation’s entire population.  Irrespective of Trump’s future political trajectory, he has already seen 150 of his judicial nominees confirmed to either federal district, appeals, or to the Supreme Court (data on these judges was primarily derived through the FJC’s Biographical Directory of Federal Judges).

While Supreme Court Justices, most recently Chief Justice Roberts and Justice Gorusch often describe federals judges as above the political fray, empirical evidence points to the contrary (Epstein, Landes, and Posner’s book The Behavior of Federal Judges provides a much deeper analysis of this subject).  Presidents see judicial nominations as such an important task because this is their opportunity to imprint the judiciary with judges that share their views and values. This has been one of Trump’s most significant objectives since reaching office and one that he successfully fulfilled up through this point in his presidency (a previous post documented the impact of Trump’s judicial appointments for first time federal judgeships).

While all judicial nominations carry great importance, the ones that may have the largest effect on influencing the trajectory of the courts occur when a president appoints a judge to fill a seat previously held by a judge appointed by a president from the opposing party. This potentially allows the president to shift the median views held by judges on that court. Over one-third of Trump’s 150 appointees across the three court levels have filled seats from judges previously appointed by Democratic Presidents. 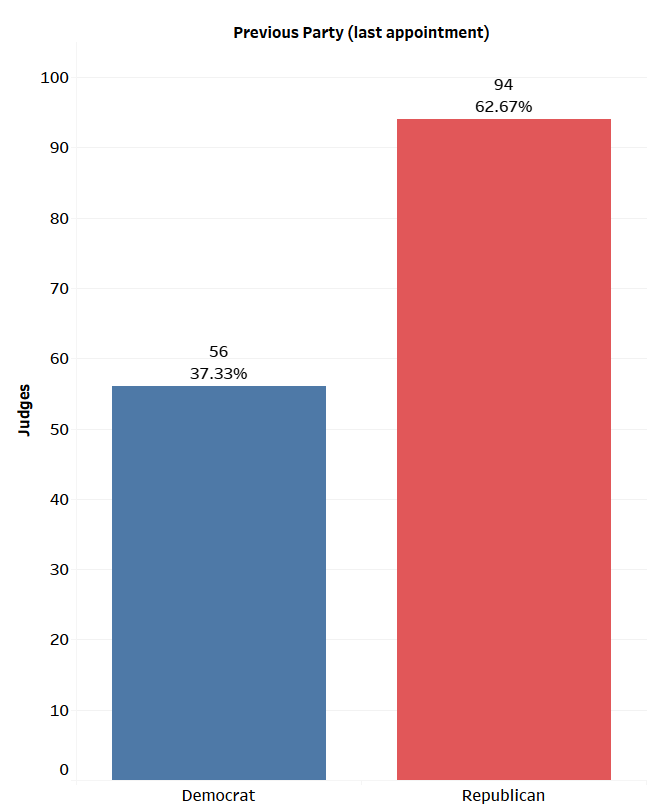 Trump’s appointees to the federal courts of appeals and the U.S Supreme Court are listed in the following table along with the parties of the presidents that appointed the judges who previously held their seats, their approximate ages, and their confirmation vote ranges. Their ages give some insight into how many years we might expect them to serve on the courts and their confirmation vote range perspective on the contentious and partisan nature of the current confirmation processes.

38% of these judges filled seats previously held by judges appointed by Democratic Presidents, 71% of the judges were nominated by fewer than 60 majority confirmation votes (the shift from 60 votes needed to confirm judicial nominees to a simple majority was a move made by democrats in Congress in 2013), and only two appointees are in their 60’s while 49% (22 appointees) are under the age of 50.

Changes to individual judge’s seats in isolation tell part of the story of the changes to the federal courts but these do not complete the picture. To fully comprehend the magnitude of the changes, the following charts show various metrics of change by individual courts. The first figure looks once again at the federal appeals courts and at the Supreme Courts. For each court, the columns show the percentage of republican appointees prior to Trump, the current percentage of republican appointees, the difference between the two (Trump’s increase in the percentage of republican judges by court), the number of active, non-senior judges on the each court, and the number of judges Trump appointed by court. Courts with current judicial compositions that are majority republican include red bars while those with majority democratic judges are in blue.

The appeals court with the highest percentage of Trump judges is the Sixth Circuit with 37.5% (six out of 16 active judges). Trump made the most appointments to the Ninth Circuit with seven so far, but this is not the largest percentage increase in judges due to the size of the Ninth Circuit.  The only two circuits where Trump lacks an appointment so far are the First and the Federal Circuit Courts of Appeals (SCOTUS, the Tenth, and D.C. Circuits all have 0% change as well because all of the appointees filled seats previously held by judges appointed by Republican Presidents.

The majority of Trump’s overall judicial appointments have been at the district court level, which is shown in the following four charts.

In First Circuit courts, Trump shifted the percentage of Republican judges 33.33% in the district of Rhode Island. This court only has three active judges.  Trump added the most judges in a Tenth Circuit court to the Western District of Oklahoma with three so that the judges in this court remained all appointed by Republican Presidents. In the Eleventh Circuit courts, Trump filled both active judgeships in the Middle District of Alabama moving the court to the right. He added the most appointments within this circuit to the Northern District of Georgia with four moving it from 18.18% judges appointed by Republican Presidents to 45.45%.

The only judge he added to a Second Circuit district court was Kari Dooley. Since Dooley took the seat of a judge previously appointed by a Democratic President, this shifted the balance of judges in the District of Connecticut in the republican direction.

Trump had more success in Third Circuit district courts where he moved both the District Courts for the Eastern and Western Districts of Pennsylvania from majority democratic appointees to majority republican appointees. Trump’s five appointments to fill seats in the Western District of Pennsylvania is the second most for any federal district court.

The shifts to Fourth Circuit district courts were more modest. Trump added a single judge to four of the eight district courts in the circuit. This allowed Trump to move the balance of the Eastern District of Virginia to an even split between democratic and republican nominated judges.

The only shift Trump made to a Seventh Circuit district court was to the Northern District of Illinois where his three judges increased the percentage of judges nominated by Republican Presidents 5.26% to 31.58% overall. The balance of all other Seventh Circuit District Courts remained the same. 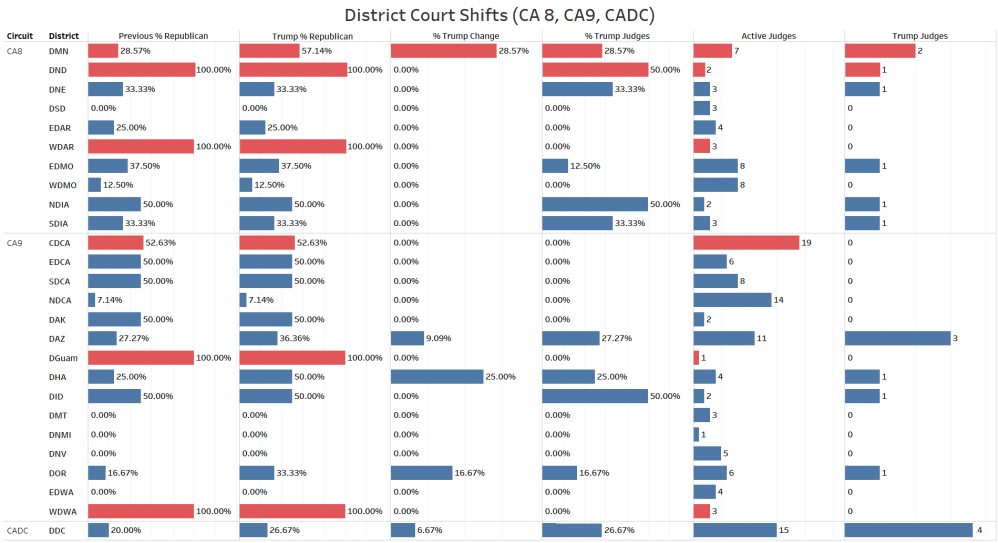 In the Eighth Circuit Trump added the most judges to the District of Minnesota with two. This moved the percentage of active judges from majority democratic to majority republican.

This all leads to the question of the extent of the changes Trump made to the federal judiciary as a whole. The answer is quite substantial. The following chart features aggregate numbers from appeals and district court judicial appointments by overall circuit.

Trump’s appointees constitute over 20% of eight appeals courts including the Supreme Court. His largest percentage increase across a circuit and its districts courts was to the Eleventh Circuit which now include over 31% Trump judges. He made the second greatest impact to the Fifth Circuit and its district courts, appointing nearly 26% of the judges on these courts.With 27 appointments, he also made the most substantial absolute contribution to the Fifth Circuit. By contrast Trump only added three judges to the First Circuit and four to the Second Circuit.

With over a year left in his presidential term, Trump should reach nearly 200 total federal judicial appointments. With many of these judges tipping the balance of the courts in favor of republican nominated judges, the transition in the types of the decisions these courts make are already noticeable. These changes will become even more apparent as time goes on. While there is no guarantee that any one of these judges will espouse hard line conservative principles, the sheer number of appointments to such a diverse range of federal courts does set an expectation that the courts will likely never be the same as they were before Trump achieved the office of President.