This post focuses on the interaction among the Justices in this Term’s oral arguments.  In particular it looks at when Justices interrupt each other and when they reference one another with their utterances.  To code interruptions, I went through the Term’s oral argument transcripts and looked for instances when one Justice began speaking and another Justice interjected before the first Justice’s statement was complete and before an attorney spoke.

Some of this coding is subjective since the written transcripts do not cover all of the nuances that are apparent in the audio recordings.   For instance, I did not code any interruptions in the following dialogue from Puerto Rico v. Sanchez Valle:

As interruptions can occur both intentionally and unintentionally, and can, but do not necessarily affect the interrupted Justice’s speech, I do not make any value judgments on the effect of an interruption.  Also, Chief Justice Roberts’ role presiding over the arguments forces him to occasionally interject in a non-disruptive fashion to direct or end a conversation.

The other type of interaction I focus on is when a Justice references another Justice in an utterance.  As with interruptions, these instances can take a positive or negative tone but in either case they highlight the other Justice and occasionally bring the conversation back to the referenced Justice.

“CHIEF JUSTICE ROBERTS: Why don’t you take — the — the rest of us are interested in your answer to Justice Breyer.” (Sturgeon v. Frost)

There are also instances where the Justices point out their disagreements or divergent opinions from other Justices:

“JUSTICE SOTOMAYOR: I’m very surprised that Justice Alito doesn’t know that most of these warrants are automatic. If you don’t pay your fine within a certain amount of days, they’re issued virtually automatically.” (Utah v. Strieff)

“JUSTICE KENNEDY: I — I don’t understand why the statute that Justice Breyer is focusing on, that part of the statute.” (Sturgeon v. Frost)”

“JUSTICE SOTOMAYOR: The principle of contract interpretation — I — I beg to differ with Justice Scalia,” (DirecTV v. Imburgia)

Finally there are instances of clarification and acknowledgement:

“JUSTICE KENNEDY: Justice Scalia is asking what — what — what the test — what is the test here?” (Harris v. Arizona Independent Redistricting)

“JUSTICE KENNEDY: I — I inadvertently interrupted Justice Ginsburg, but in the — in the 19 cases here, you don’t find that principle?”  (Bank Markazi v. Peterson)

One other important caveat is that all Justices do not necessarily talk in all parts of oral arguments (see the example in a previous post regarding U.S. v. Texas).  For instance, oftentimes Justices Breyer, Ginsburg, Sotomayor and Kagan interact when one attorney is presenting his or her case while Justices Alito, Roberts, Kennedy and Scalia (prior to his death) interact with the opposing attorney.  This complicates any interpretation of the results of the Justices’ interactions.

First for aggregate counts: the figure below shows the number of times each Justice was interrupted by another Justice this Term from least to most. 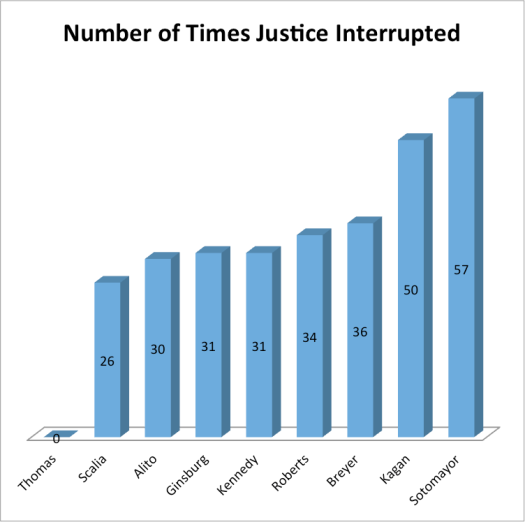 The next Figure looks at the number of times the Justices acted as interrupters of other Justices. 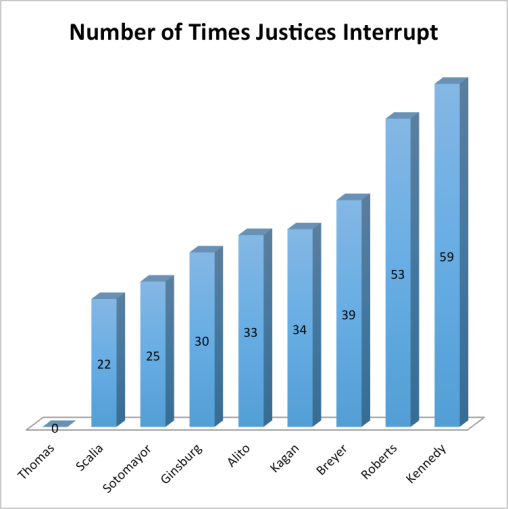 Justice Kennedy was the most frequent interrupter.  This is not wholly surprising since he is often more engaged than other Justices in both sides arguments in a given case. Justice Roberts interrupted the next most although some of these may have actually been instances of Justice Roberts directing conversation based on his position as Chief.  After this, similar to the number of times the Justices were interrupted, there is a large drop-off to Justice Breyer who interrupted the others the next most with 39 interruptions.  As with the interrupted Justices, Justices Thomas was also not interrupted in the one oral argument he participated in this Term.

The next set of figures look at the number of times the Justices reference each other.

Next is the chart looking at the number of times the Justices reference each other. 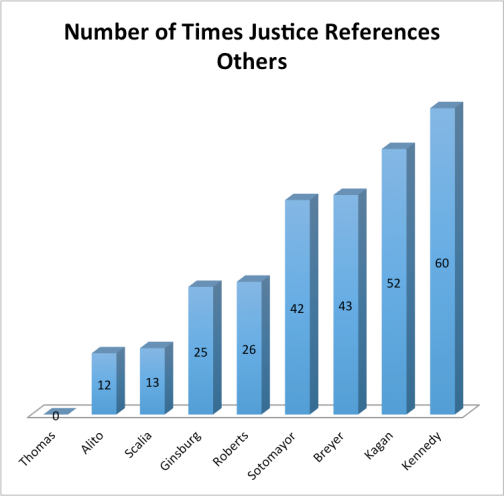 Justice Kennedy, similar to his role as the most active interrupter is also the Justice that references the other Justices the most with 60 references.  Justice Kagan also has a large number of references with 52.  While Justices Sotomayor and Breyer make over forty references each, Justices Ginsburg and Roberts each have fewer than 30 references, and Justices Scalia (who only participated in a subset of oral arguments) and Alito have fewer than 20 references apiece.

While there are discernible trends from this data that speak to the oral relationships between Justices, much occurs within the context of each argument.  Some of the trends make intuitive sense – such as the many times Justice Breyer is mentioned by other Justices, while others such as the number of times Justice Kennedy references Justice Alito appear based on individual rapport.  Just as some of the behavior is easier to square with common understandings of the Justices’ patterns in oral arguments, some is easier to interpret as strategic versus purely conversational.  Unfortunately without information about the Justices’ positions before oral arguments and in the conferences after oral arguments, it is difficult to ascertain the impact these interactions have on their earlier impressions of each case.