In some ways, this was just another week for the Supreme Court. The Court released decisions with the Court’s right splitting with the Court’s left.  Orders were set forth in many petitions pending before the Court.  The Justices heard seven oral arguments.  But there was a new voice in the proceedings. A voice that sought meaning from the text of statutes from the very start (Gorsuch’s first comments on the Court are below).

This week Justice Gorsuch gave us a sense of how the post-Scalia Court will look.  In some ways such as Justice Gorsuch’s devotion to textualism, there are indications that things might not stray far from the past.  Although Justice Gorsuch was in no sense bashful about insinuating himself in the discussion (see below), he also was not as querulous as Justice Scalia. To be fair this might have to do with him easing into his new post.

In his first oral argument Gorsuch was quite garrulous – almost surprisingly so for a Justice’s first arguments. If he kept up at that pace he might have created signals of a distinct shift in the Justices’ oral argument behavior.  While a shift was perceptible by week’s end, the remainder of the week signaled a decline in Gorsuch’s talkativeness from the arguments in Perry v. Merits Systems Protection Board.  His word counts for the first seven oral arguments are covered in the first graph. 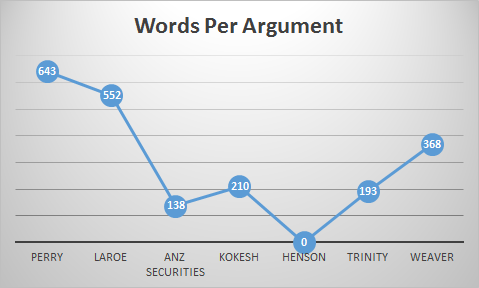 From a peak of 643 words in Perry Gorsuch dropped to a nadir in Henson where he did not speak at all.  Gorsuch also dominated the discussion relative to the majority of other Justices in Perry.  This can be seen in the following graph that shows he spoke more than all Justices aside from Chief Justice Roberts and Justice Kagan. 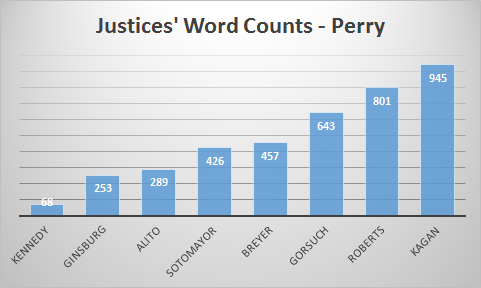 He was engaged in the arguments with both petitioner’s and respondent’s counsel as is evident in the graph of the order of speech below.

This can be contrasted with Gorsuch’s participation in Trinity Lutheran later in the week.  Here Justice Gorsuch took a more limited role, only engaging with the respondent state’s attorney.  In Trinity Gorsuch also, somewhat predictably, assailed the state’s argument for disparate funding of a religious institution relative to funds dispersed to secular institutions.

Gorsuch’s choice of how assert himself was interesting as well.  The Justices’ speech tends to be heavy in statements and somewhat light in questions.  Questions, however, often elicit information relevant to their eventual opinions in cases and so the information gained from them can be quite valuable.  Gorsuch had a fairly high ratio of questions to statements in his first set of arguments with a higher ratio in the arguments where he spoke less.

This can be visualized relative to the rest of the Justice’s participation by looking at the highest ratio of questions to statements from a Justice during this week. Below are the top five instances.

Gorsuch’s six questions to nine statements in Trinity Lutheran puts him in this top five.  If this trend continues we might expect Justice Gorsuch not only to expand the Court’s questioning during oral argument, but also to expand it in certain, specific directions.

In the aggregate for the week, Gorsuch with 114 questions asked more than Justices Alito, Ginsburg, and Kennedy with his highest count coming in Perry. 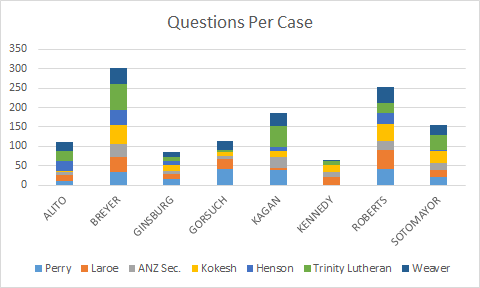 Looking at Gorsuch frequency speaking as a fraction of all the Justices speech per oral argument we get the graph below.

While oral arguments may not have the same tenor now as they did with Justice Scalia, the Justices are finally back at nine and with this number they will need to create a new conversational dynamic.  This will take time – much more than one week. Justice Gorsuch’s role on the Court will also become increasingly apparent after he participates in this Court’s decisions as well. For now, one can only speculate based on the modicum of information we have which was generated through Justice Gorsuch’s first week of Supreme Court oral arguments.

Analyzed with the aid of qdap in R