The Court has undergone much transition in the last year. Justice Scalia began the 2015 term on the Court and passed away in February of 2016.  The Court was composed of eight members between February 2016 and April 2017 when Justice Gorsuch was confirmed to the Court.  These transitions had the potential to alter the Justices’ speaking opportunities during oral arguments and their abilities to extract information about each case.

Looking at a sample of cases from the previous term before and after Justice Scalia passed away, we see mild transformations in the Justices’ relative speech patterns during oral arguments. 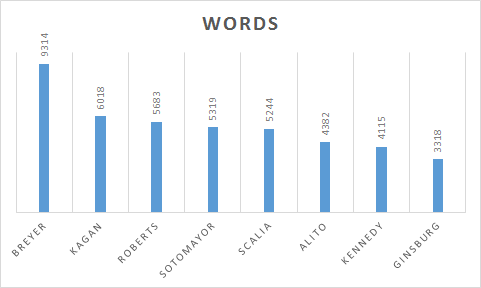 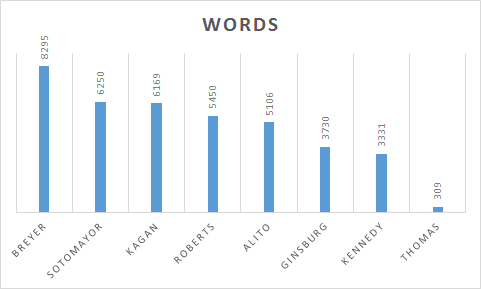 What are the highlights from these figures? Justice Breyer spoke the most during both periods. Justice Sotomayor took on a greater role during the post-Scalia arguments as did Justice Alito.  Justice Kagan was one of the most gregarious speakers during both periods and maintained relatively similar word counts before and after Scalia’s death. The same can be said for Chief Justice Roberts who fell just behind Justice Kagan in both periods.  The end of the year oral argument statistics for the 2015 term maintained this pattern with Justices Breyer, Kagan, and Roberts speaking the most. 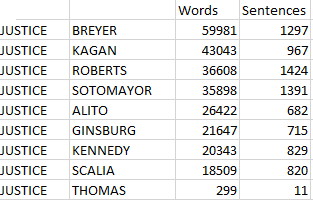 Now that the 2016 term is complete we have many more opportunities to gauge the effect of the Court’s changing composition on the Justices’ speech patterns during oral arguments.

Gorsuch Started Out Fiery Then Simmered Off

One question that has lingered since Justice Scalia passed away has been how a new Justice would shift the speaking dynamic among the Justices.  The changes with Justice Gorsuch now on the Court are both nuanced and notable.  While Justice Gorsuch appeared poised to take a leadership role during oral arguments as he was one of the most active speakers during his first argument in Perry v. Merit System Protection Bd., he was more reticent after this initial argument. Across all April arguments (which include all arguments Justice Gorsuch participated in thus far as a Supreme Court Justice), Gorsuch was the third least talkative Justice (not counting Justice Thomas) averaging 325.9 words per argument. 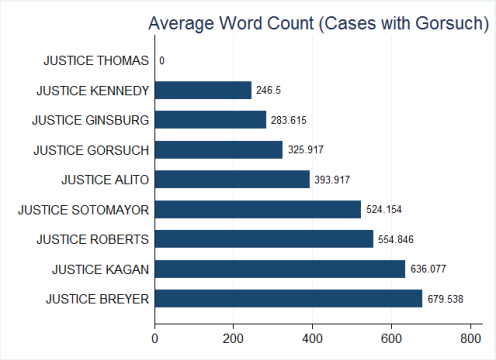 Next, examining the breakdown of relative speaking by Justice for the entire term, Justice Breyer spoke by far the most with almost one-quarter of the words across all Justices.

Justices Kagan, Roberts and Sotomayor make up the next tier of speakers followed by Justices Alito, Kennedy, and Ginsburg.  Justice Gorsuch only sat for thirteen arguments and so his speech only constitutes 1.8% of the total speech across Justices.  Although Justice Gorsuch is not likely to be the most active speaking Justice during oral arguments, based on his engagement thus far he may fall somewhere between the speaking ranges of Justices Kagan and Alito.

Justice Gorsuch was an active questioner during April arguments. Looking at fraction of his speaking that was composed of questions, Justice Gorsuch falls just below Justices Alito (who consistently asks a high proportion of questions) and Ginsburg.

Some Things Stay the Same

One way the Justices may get more words in edgewise is through fully utilizing each utterance or opportunity they have to speak.  The Justices with the most words per utterance, Justices Breyer and Kagan are also two of the most talkative Justices across the term.

This does not hold for all Justices though as Chief Justice Roberts has the lowest number of words per utterance and yet he still manages to speak quite a bit during oral arguments.  This is also a product of the Chief’s role in moderating the arguments.  Justice Alito who tends not to speak at great length during oral arguments has a high level of words per utterance.  Justice Gorsuch is on the lower end for this metric.

No other Justice makes the top five instances of words in an argument.  While Justice Breyer continues to speak the most during oral arguments, we are likely to see Justice Gorsuch speak more during his first full term.  The April arguments which included Justice Gorsuch were a time for the Justices to get acclimated to their new, nine Justice composition.  If this composition holds, the Justices will fall into new patterns in 2017 even as some of their distinct characteristics remain the same.