Due to their public nature, oral arguments shed light on dynamics between the justices in unique ways.  They reveal details of the justices’ machinations and they define the Court for many outside observers.  The Court lost Justice Scalia last year who was the justice most known for making aggressive comments from the bench.  In his place Justice Gorsuch has not proven quite as menacing even though he has exuded a sense of sarcasm somewhat unique to the Court.  Take for example these two interactions between Justice Gorsuch and attorneys from oral arguments towards the end of last term:

MR. LANDAU: So we’re not asking this Court to break any new ground.  It’s —

JUSTICE GORSUCH: No, just to continue to make it up.

MR. DVORETZKY: Justice Gorsuch, the way in which this case has been litigated, and trial counsel conceded this in the Second Circuit, I’ll represent it to you here today, we are not seeking separate relief only in our name.

JUSTICE GORSUCH: Well, except for the complaint expressly says that.

Justice Gorsuch’s approach adds a new dimension to Supreme Court oral arguments, although so far the extent of Justice Gorsuch’s role has yet to be concretely defined.  With the first three sitting so far this term behind us, the nine justices now on the bench have developed certain patterns of interactions and relative roles during oral arguments.  These do not hold uniform in all instances, yet they are fairly stable in most.

A look at the justices’ counts of words spoken across all oral arguments so far this term looks unwieldy at first. 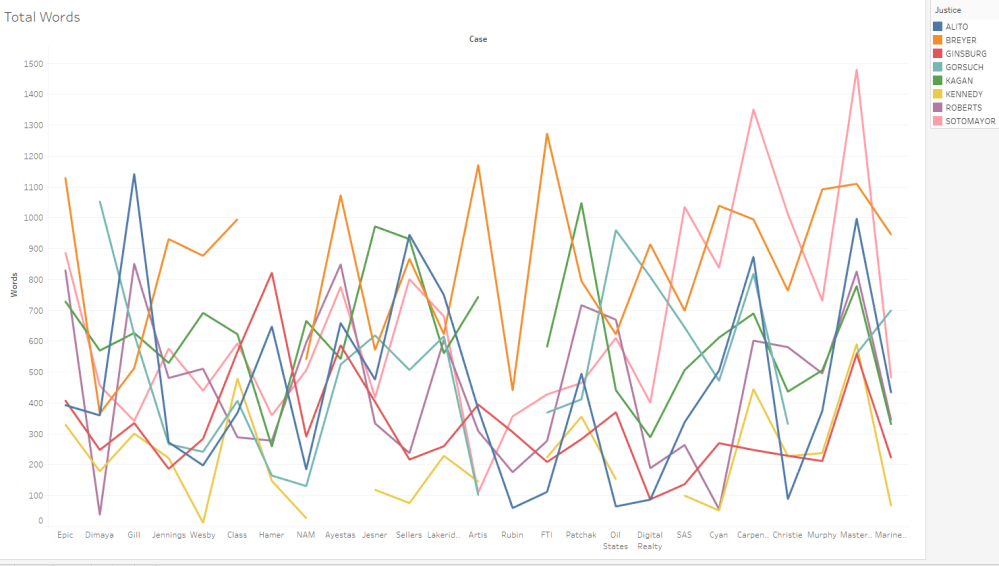 If this were our only piece of information on the justices’ speaking patterns this term we would likely have a difficult time coming to many useful conclusions. A few things that do stick out (and that fit with patterns from other terms) are Justice Breyer in the orange speaking the most in several cases, Justice Kennedy in the yellow often speaking the least (notwithstanding Justice Thomas who has not yet said a word during oral arguments this term), and Justice Sotomayor in the pink occasionally dominating the proceedings.  Still, the jagged lines show the extent of variation in the justices’ speaking patterns.

To focus on the occasions where justices were the most active during oral argument, the following chart shows the individual oral arguments where a justice spoke the most so far this term.

While Justice Breyer has more oral arguments at top word counts than any other justice, Justice Sotomayor spoke the most words of a justice so far this term in Masterpiece Cake and the second most in Carpenter (these points are visible in the first chart as well).  These cases have been described as two of the most important this term.

The justices’ speaking counts can be parsed in a variety of ways to learn about the Court’s dynamics.  Looking at total word counts, Justices Breyer is way ahead of the pack with Justices Sotomayor and Kagan rounding out the three most active speaking during oral arguments this term.

This order is similar to that from last term although Justices Sotomayor and Kagan have flip-flopped positions.

Comparing this term with Justice Scalia’s last full term in 2015, the relative word counts for Justices Gorsuch and Scalia do not appear terribly far apart.  While Justice Gorsuch was the fifth most active justice in absolute terms so far this year, he was more active relative to the other justices on a per-case basis as he did not participate in each oral argument.  Looking at the justices’ words spoken divided by the number of cases where they spoke, Justice Gorsuch and Chief Justice Roberts switch positions.

This indicates that Justice Gorsuch may be strategic in his decisions of when to and not to speak.  This potential strategic nature is further accentuated by the number of questions Justice Gorsuch asked so far this term.

While Justice Gorsuch spoke the fifth most overall of the justices, he asked the fourth most questions. This shows that Justice Gorsuch may have focused his speaking opportunities on asking questions to a greater extent than some of the other justices.  Depending on the efficiency of his questions, this potentially allowed Justice Gorsuch more attempts to find relevant information than some of his counterparts.

When we look at the total number of speaking turns for all justices at oral arguments so far this term, Justice Gorsuch comes in third.  Here we see that Justice Gorsuch looked to assert himself more than the other justices aside from Justices Breyer and Sotomayor.  An interesting, although not all too surprising finding from this chart is that Justice Sotomayor took more turns talking than Justice Breyer who spoke much more on the whole than Justice Sotomayor.  We can see the reason for this relationship when we look at the number of words per the number of talking turns for each justice.

This “holding the floor ratio” shows Justice Breyer spoke the most words per talking turn. Justice Sotomayor on the other hand is fifth according to this metric and Justice Gorsuch is sixth.  This ratio may hold different meaning for different justices, however, as some are more efficient in using sparing word while others tend to start speaking without completing their points.

The justices are not the only speakers during oral argument, and there is an active scholarly debate about whether speaking more benefits attorneys engaged in oral argument. Clearly speaking more words carries with it the potential to convey more information.  If this is the case, then on the balance more words should be seen as a positive for an attorney who wants to convey certain points.  The instances where attorneys spoke the most so far this term are shown below.

Many of the attorneys on this list are well known to the Court and several have even worked for or currently work for the Justice Department.  Adam Unikowsky spoke the most of all attorneys during oral arguments in Artis, a case about the correct tolling period for a statute of limitation. Other Supreme Court veterans on this list include Paul Clement, Kannon Shanmugam, Michael Dreeben, and Neal Katyal.

We can also calculate the a hold the floor ratio for attorneys this term based on the number of words they spoke on average per talking turn. 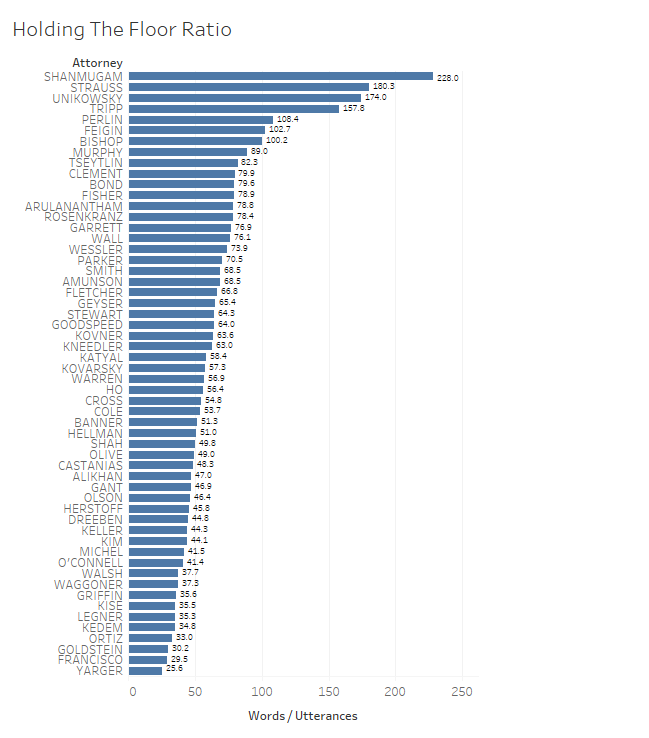 Based on this metric Kanon Shanmugam spoke the most words per utterance overall. Adam Unikowsky is third on this list which covers all attorneys that have argued this term.

For the most part, the justices appear calculated in their oral argument behavior so far this term.  They often vary in the extent they choose to involve themselves in each oral argument.  This involvement takes the forms of words spoken, talking turns, and questions.  Attorneys have also differed substantially in their ability to convey their arguments to the justices.  Some of this may relate to efficacy at oral argument while some also likely has to do with the justices’ relative level of engagement.

Justice Gorsuch has made his presence felt in oral arguments.  From describing steak rub recipes to back-and-forths with attorneys, he has appeared more than willing to participate in oral arguments and to ask for counsels’ assistance in clarifying matters before the Court.  With Justice Sotomayor ratcheting up her involvement and Justice Breyer’s continued dominance, there is little room for more reticent justices to engage.  That said, even the less talkative Justices Ginsburg and Kennedy have made their presences felt in particular arguments.  Will these speech patterns remain consistent across the rest of the term? Will they affect the justices’ group and voting behaviors? These are questions that will be much easier to answer during later stages of this Supreme Court term.

If you feel like the end of this post is reminiscent of the old Batman T.V. program starring Adam West you are not alone.