Possibly due to its eight Justice configuration, the Supreme Court heard a unique slate of cases this term with no noted landmark cases or decisions.  Then again perhaps landmark is in the eye of the beholder.  This term the Supreme Court heard six patent cases which conceivably is the most such cases the Supreme Court has heard in recent memory (and yes at least one of these cases has been dubbed “landmark” by some).  Perhaps to fill its docket or perhaps due to a reinvigorated interest in defining the scope of patent law, the Court has taken strides this term in delineating boundaries of patent protection.

Per the Supreme Court Database, across the Court’s modern history the most patent cases the Court has heard previously in a term is four with the balance of rulings in the liberal direction or generally against the patent holder (pro-competition).

While the Justices that wrote the most majority patent opinions for modern Courts are past Justices Hugo Black and William Douglas, various recent Justices have also written multiple patent opinions. 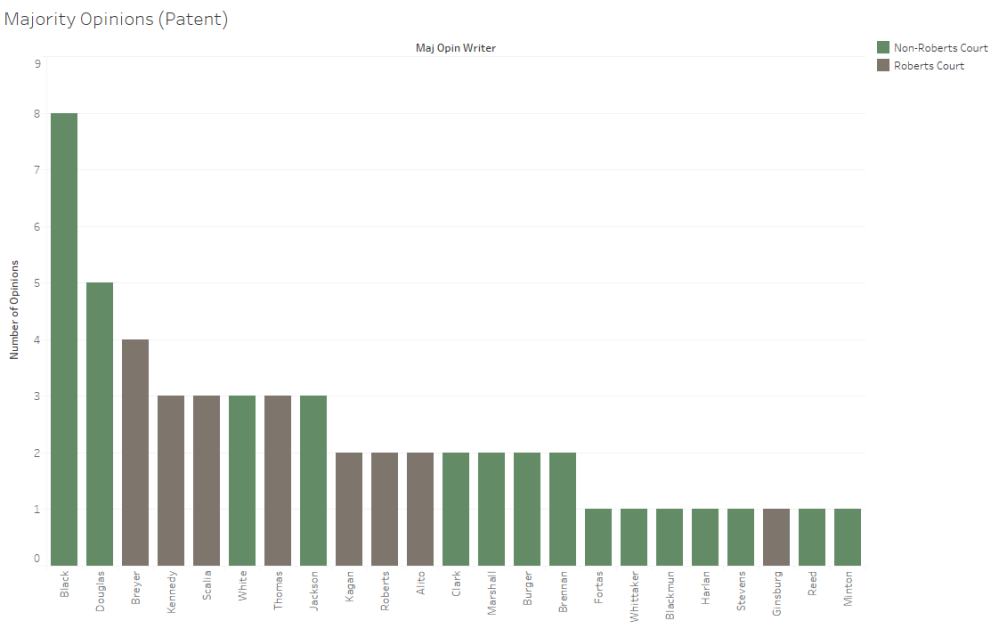 Although Justice Breyer wrote the most such opinions (through the 2015 term) of these recent Justices, the other recent Justices with multiple opinions all tend to favor big business interests, which tend to be those of patent-holders.

Since 1983 when the Federal Circuit began to hear cases, most of the Court’s patent docket arose from there.  Before then the circuits had a mixed distribution with many cases coming from the Ninth and Seventh Circuits.  The following figure plots the number of cases from each lower court in the top half and the years the Supreme Court took cases from these lower court cases in the bottom half.

This term ties 2010 for the most cases the Court has taken from the Federal Circuit in a term with seven. Six of these are the patent cases while the seventh is the trademark case Lee v. Tam.

This background leads us to the current state of patent law under the Supreme Court.  Although the Justices have been friendly to patent holders, this position has not held across the board.

In 2015, two of the three cases were consolidated – Halo Electronics v. Pulse Electronics and Stryker Corp. v. Zimmer.  Chief Justice Roberts wrote for a unanimous majority in these cases that the federal circuit’s previously established Seagate test for patent holders to increase damages was overly rigid.

In the other case, Cuozzo Speed Tech. v. Lee, the Court with a majority opinion from Justice Breyer ruled against the patent holder specifying that the PTO has leeway to construe patent claims to the “broadest reasonable construction.”  The case dealt with the PTO’s regulation and the Court upheld the PTO’s rule-making power in this case.

Of the six patent cases on the Court’s 2016 docket the Justices have already ruled in four of them.  As the Court has in the past, this term the decisions so far predominately move against increased rights for patent holders.  Justice Sotomayor wrote the majority opinion in two of these cases – Samsung v. Apple and Life Techs. v. Promega – both with unanimous support from the other Justices.  In Samsung the Court held that an infringer need not pay damages for infringing on an entire product when the infringement is only on a component of the product.  In Life Techs. the Court limited potential liability for patent infringement again by holding that supplying a piece of a multicomponent invention abroad is not necessarily in violation of the Patent Act.

The other two undecided patent cases this term are Impression Products v. Lexmark dealing with the rights of patent holders after a conditional sale of title of the item and Amgen v. Sandoz which looks at the requirements for protection of a biosimilar product.

In all the Court has recently provided a mixed bag for patent holders by extending rights in some cases such as Halo Electronics while curtailing rights in cases like TC Heartland where patent holders are further restricted from where they may bring suit.

Amicus groups have had plenty of business in these cases as they often do in patent matters.

Of the six patent cases in 2016, the American Intellectural Property Law Association wrote briefs in the most with five.  Next with briefs in three of these cases are Biotechnology Innovation Org., Intellectual Property Owners Assoc., and Public Knowledge.

Finally, in most of the patent cases over the past two terms the lower court’s (Federal Circuit’s) decisions have been overturned.  The only case where it was affirmed was with Judge Dyk’s ruling in In Re: Cuozzo Speed Technology (this is also the only case where the federal government was a merits party – the winning one).  Judge Dyk also dissented in the lower court case of Impressions Products v. Lexmark.  Judge Prost from the Federal Circuit wrote opinions in three of the cases that the Court overturned (the lower court cases in Samsung v. Apple, SCA Hygiene v. First Quality, and Stryker v. Zimmer).  The only other judge with multiple majority opinions in these cases was Judge Lourie with the opinions in the lower court version of the undecided Sandoz v. Amgen case and with the decision in the lower court’s case in Halo Electronics v. Pulse Electronics.

While this onslaught of patent cases does not signal an increase in patent cases before the Court for years to come, it does show a willingness on the part of the Justices to engage in this often scientific and complex area of law to better define its scope for future applications.