This term the Supreme Court will hear arguments in its 100th case decided below by the Federal Circuit. The Court’s recent grant of the case Kisor v. Wilkie for argument also marks the fourth case granted from the Federal Circuit this term. This is by no means a small fraction of the Court’s total caseload. In terms of federal courts of appeals, the Supreme Court has only granted more cases this term from the 2nd, 6th, 9th, and 11th circuits. When we look at the number of cases filed in these courts though, the Federal Circuit’s filings make up less than 3% of the total filings across the appeals circuits.

Why so much hubbub from the Federal Circuit? The circuit’s website explains how it differs from other appeals circuits both in the types of cases it hears and in the breadth of courts below from which it takes appeals. In terms of case type, the circuit has nationwide jurisdiction on a range of issues including international trade, government contracts, patents, trademarks, certain money claims against the United States government, federal personnel, veterans’ benefits, and public safety officers’ benefits claims (the recent glut of patent cases was the subject of a previous Empirical SCOTUS post). It hears cases that were tried below from a variety of sources much more diverse than just federal district courts.  As cases in these areas often have nationwide applications and require resolution on a national scale, the Supreme Court has taken an increasing number (both in quantity and in fraction of the Court’s merits docket) over time.

In 2018, the Federal Circuit took cases from 12 different types of lower courts (with federal district courts aggregated as one court type) as is displayed below: 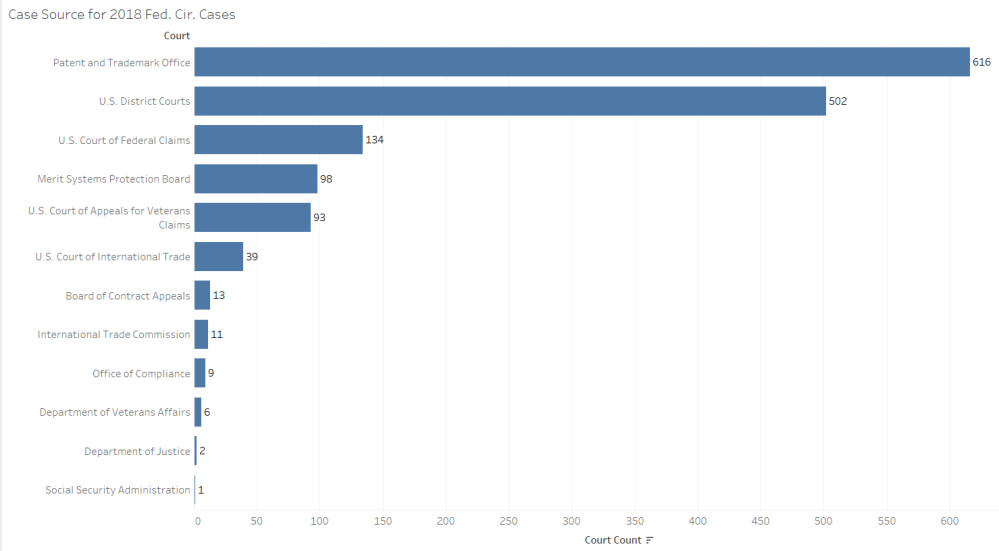 While the most cases came from the Patent and Trademark Office a considerable number came from other sources like the Court of Federal Claims, Merit Systems Protection Board, and U.S. Court of Appeals for Veterans Claims.  Two of the four cases on the Supreme Court’s merits docket from the Federal Circuit this term were initially heard by the Court of Appeals for Veterans Claims.

When we look at the fraction of federal courts of appeals cases on the Supreme Court’s merits docket since the Federal Circuit was established in 1982, we see this fraction slowly increase over time and more so in recent years. 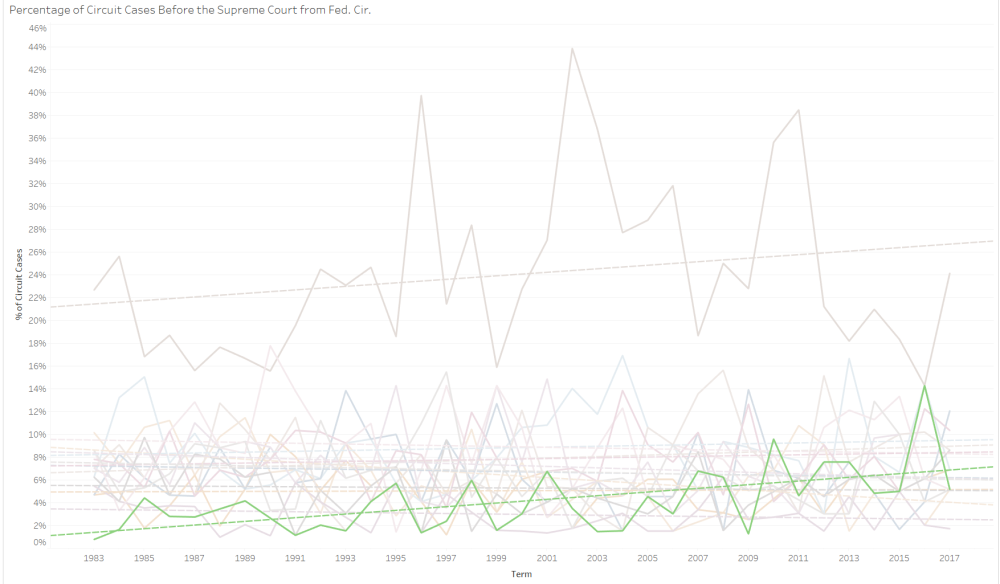 In the figure about each dotted line represents the trend of docket percentage for a federal appeals circuit. The green dotted line marks the Federal Circuit’s trend.  While the federal circuit’s line slope is increasing in this graph, many of the other circuits’ trajectories are flat or declining.

Federal Circuit cases composed the largest percentage of the Supreme Court’s merits docket of federal appeals court cases (compared to the Federal Circuit’s relative percentage of cases in other years) in the 2016 term with over 14%.  Enthusiasts seeking to have cases heard by the Supreme Court might take heed of the relative likelihood that the Court will take a case from the Federal Circuit compared to the likelihood that the Court takes a case from any of the other federal appeals court circuits.

Over time the list of courts that heard cases later appealed to the Federal Circuit and then to the Supreme Court are:

As the graph above with data provided by the Supreme Court Database shows, the most cases came from the U.S. Court of Federal Claims, but a not insignificant number were already tried once by the Federal Circuit on their way to the Supreme Court.

Focusing on the cases form this term, the Kisor case is drawing considerable attention from administrative law experts as it examines courts’ deference to administrative agencies’ interpretations of their own ambiguous statutes.  In Gray v. Wilkie, the Court will similarly look at whether the Federal Circuit has the authority to review an interpretation by the Department of Veteran Affairs of its own regulation.  The other two cases from the Federal Circuit that the Court will hear this term are Return Mail Inc. v. U.S. Postal Service where the Court will decide whether the government should be defined as a “person” that can petition for review proceedings under the Leahy-Smith America Invents Act and Helsinn Healthcare S.A. v. Teva Pharmaceuticals USA Inc. which looks at, “Whether, under the Leahy-Smith America Invents Act, an inventor’s sale of an invention to a third party that is obligated to keep the invention confidential qualifies as prior art for purposes of determining the patentability of the invention.”

This list is quite different from the one showcasing the attorneys that argued the most cases before the Supreme Court that were tried below before the Federal Circuit (arguing amici were removed): 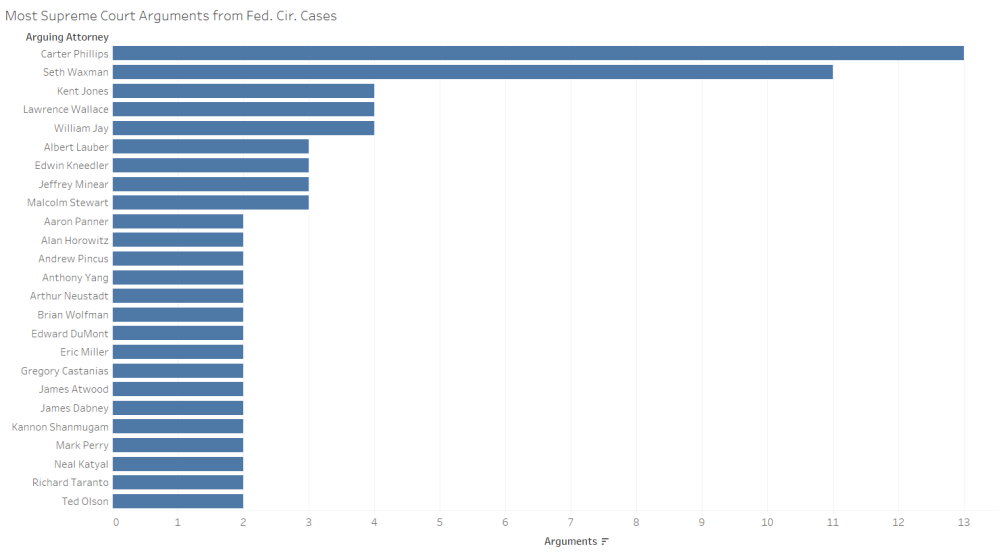 [Note: Kannon Shanmugam’s second argument in this set of cases was in the recently argued Helsinn Healthcare case.] 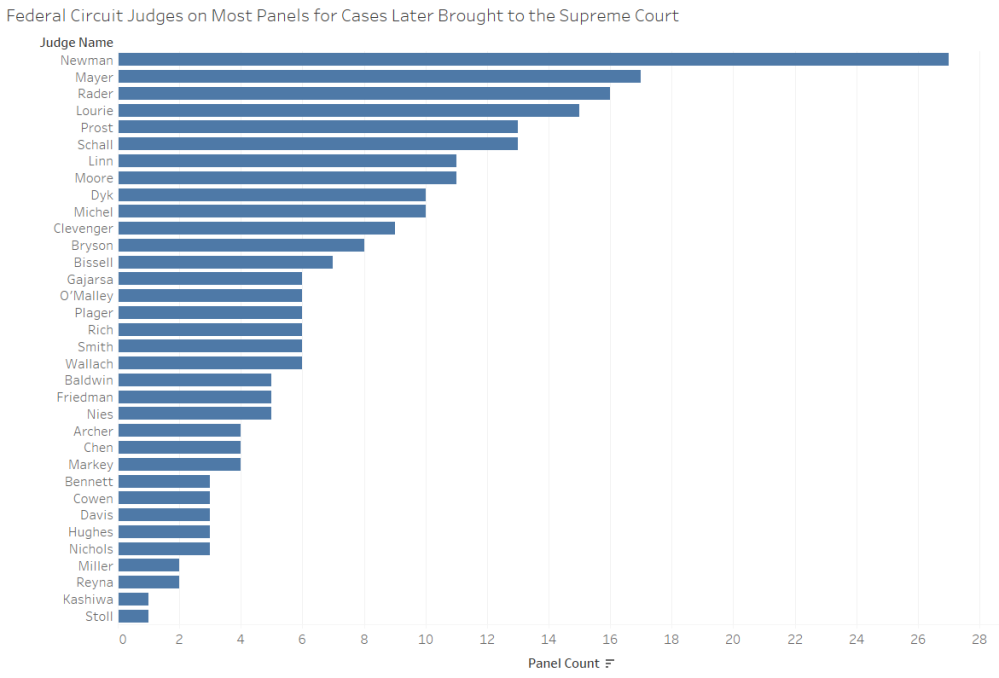 Judge Newman sat on far more of these panels than other judges with 27.  After Newman the next several judges are tightly packed together as Mayer sat on 17 of these panels, Rader on 16, and Lourie on 15.

While Newman was present on the most such panels, she was not the most overturned majority author of the bunch. When we look at Federal Circuit majority decisions that were either vacated or reversed by the Supreme Court, the list of majority authors and number of times overturned is as follows:

An account of the most prominent judges shifts when we look at those whose dissents were in cases later overturned by the Supreme Court (Hettinger, Lindquist, and Martinek give a detailed account of the strategic signaling effect of dissents in the federal courts of appeals in their 2004 AJPS article) are shown below: 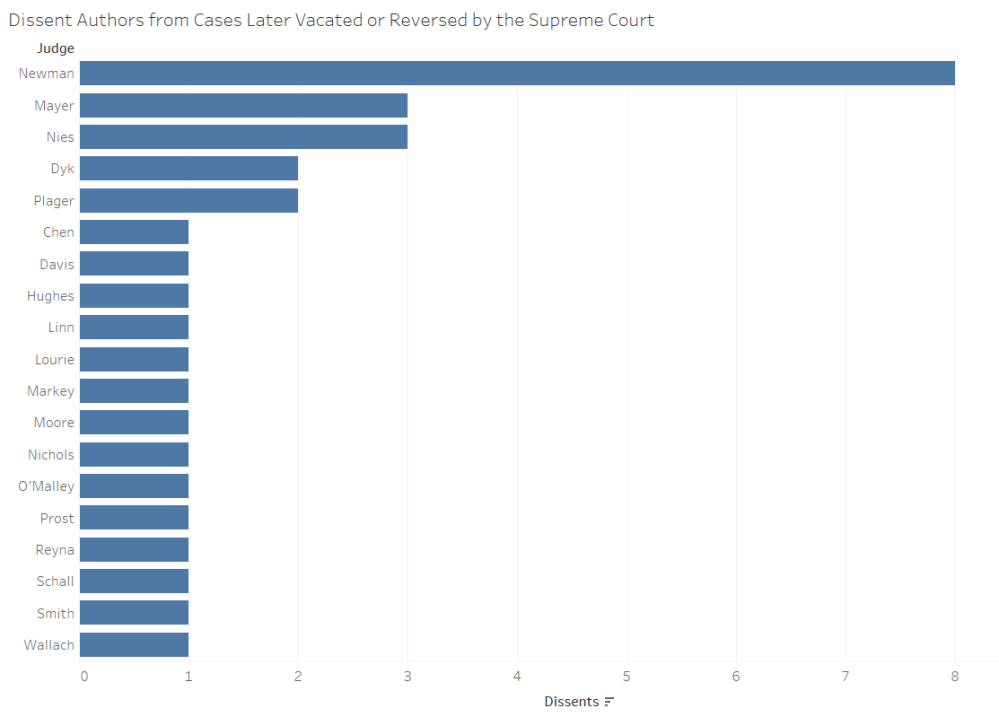 Judge Newman dominates this area with more than twice as many dissents leading to overturned decisions as the next set of judges on the list.  Aside from the top five judges on the list, all other Federal Circuit judges have at most one dissent in a case later overturned by the Supreme Court.  The disparate impact of certain judges’ dissents in this area reemphasizes the strategic nature of such dissenting behavior and reinvigorates the sense that Supreme Court Justices take heed of such signals.

Justice Thomas, who has had more majority opinions in this set of cases than any of the other justices with 15 also leads in reversals with eight.  Justices Breyer and Marshall have the next most with five each while Scalia leads in decisions vacating the lower court’s rulings with four.  Justice Souter who has the second most majority opinions in this set of cases after Thomas with ten leads in affirmances with six or more than half of his majority decisions in these cases. Thomas comes in next with five although his ratio of reversals to affirmances is much more reversal heavy.

The data above show that the Court is becoming keener on taking on cases previously heard by the Federal Circuit. In all likelihood this relates to the subject matter, national importance, and scope of the issues involved in these cases as well as the cases’ economic implications.  With this, the importance of this court will not likely wain in the near future.  The relationship between cases, attorneys, and judges helps with outcome prediction both at the Federal Circuit and Supreme Court levels. Understanding feedback loops between players in these cases remains key in forecasting how such cases may be resolved, and should remain so as long as the bulk of attorneys advocating and judges deciding in these cases remains at least somewhat static.

Consulting with attorneys at Optimized Legal