This post extends beyond the Supreme Court to look at which law schools have been most successful placing current government attorneys and sitting federal judges around the nation (thank you Jack Metzler / @SCOTUSplaces for the idea).  The positions examined include United States Attorneys, sitting federal judges, and state attorney generals and solicitor generals (AGs, SGs).  This dataset may be extended in the future to include state judges, Department of Justice attorneys, and others.  The data for this posts is built out from FJC biographic information for federal judges, the list of current United States Attorneys, and state attorney generals’ websites and directories.  It then uses US News’ law school rankings to see how schools performed based on their rankings and relative to their enrollment counts.

According to the FJC’s data, there are 1,307 sitting federal judges.  These judges far outnumber the sum of individuals from the other categories and yet tend to fall to particular schools.  With far fewer observations there are still 43 schools with only one state AG or SG.  By contrast there are only 29 schools with one federal judge or United States Attorney.

The schools that produced the most current state AGs and SGs place towards the top of the US News rankings.

Harvard with the most such attorneys ranks 3rd according to US News. Georgetown ranks 15th, Yale ranks 1st, University of Chicago ranks 4th, and University of Virginia ranks 8th.  It is readily apparent that these counts do not directly track the schools’ rankings and that certain lower ranked schools place more top state attorneys than some of the more highly ranked schools.  It is also readily apparent that these schools are all top 20 law schools according to the US News and so there are no entries that do not at least somewhat correlate with their rank.

Now looking at the combination of all attorneys and judges there are differentiations from the US News ranks as well as parallels.

Several schools outside of the US News top 100 have multiple placements.  Some are shown here with Howard leading the list

All of the schools in this figure have at least six judges or attorneys on the list.  This conveys another way of thinking about successful schools that may not be sufficiently accounted for in the national rankings.

The final figure account for all schools on the list and use multiple measures to create the index. It looks at the number of lawyers and judges in each school based on the schools’ enrollment counts.  This gives a sense of the number of placements per students in each school. 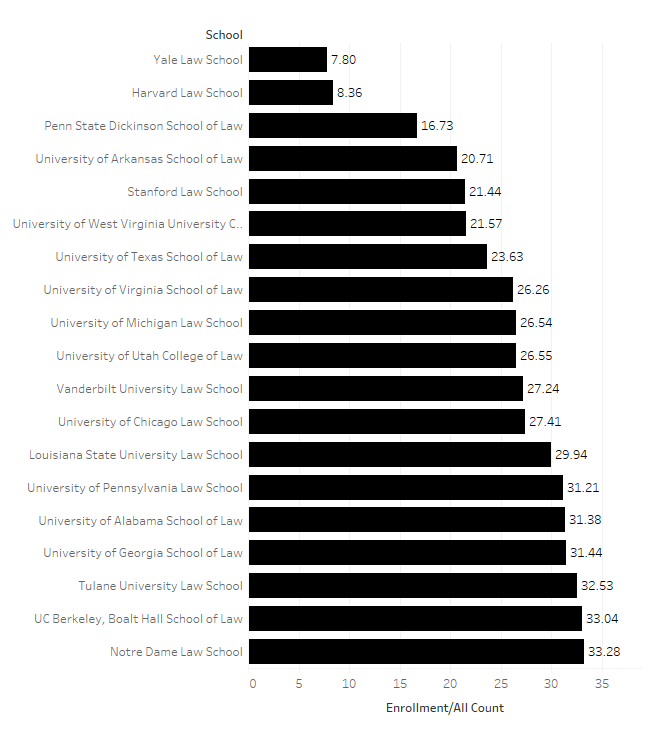