Earlier this year I ran a blog post on the most powerful justices across time, which focused on their decisions in cases with single vote margin majorities.  That post accounted for the decision makers, but it did not consider the attorneys whose arguments factor into the justices’ decision calculi.  This post takes a look at those attorneys by focusing on all single vote margin decisions during the Roberts Court or since the beginning of the 2005 term.  These cases include per curiam decisions with no majority author where, nonetheless, four justices dissented.

First some background on the case dimensions.  It is probably little surprise which justice authored more of these decisions than any other. The justices’ data is displayed below:

Along with the authors, there are particular times of year when these cases are heard and argued.  Many Court’s high-profile decisions are released towards the end of each term.  The figure below plots the number of these close decisions by decision month since 2005. 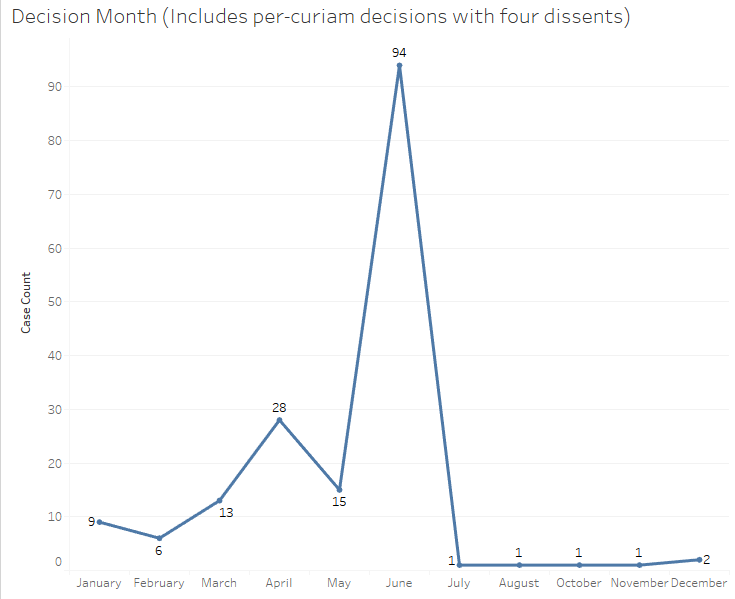 There is greater variation when we look at when these cases were argued by month. 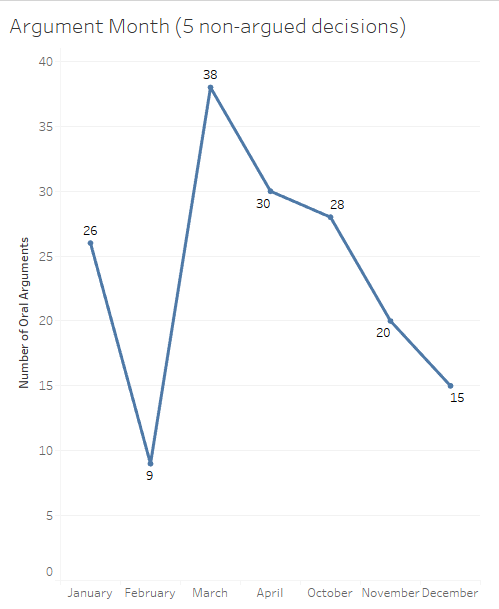 The argument months for one vote margin decisions is fairly well dispersed across the months of oral arguments with the justices hearing the most of these cases in March and April – the months leading up to the June decisions.

There is also much fluctuation in the number of these close decisions by term.

Although the count of these decisions is variable by term, the significant drop off was during the 2015 and 2016 terms when the Court heard cases with eight justices as an even number of voting justices forecloses single vote margin decisions (unless a justice recuses).

Who argued these cases? The government was involved in much of this litigation so government attorneys are prominent in this group.  The figure below shows attorneys that argued at least three cases since 2005 that were decided by one vote.

At the top of the figure is Paul Clement who argued cases both as Solicitor General (SG) and in private practice.  Gregory Garre was another SG during this period that also went on into private practice.  Don Verrilli had this dual experience as well.  The two non-governmental attorneys (during this period) with the most arguments in single vote margin decisions are Carter Phillips and David Frederick.

Using the Supreme Court Database’s coding for the side that won each case, the next figure shows the attorneys with at least two wins in this set of cases since 2005:

Former-SG Gregory Garre tops this list followed by Paul Clement, Jeffrey Fisher, and another former SG, Seth Waxman. This list is a veritable who’s who of Supreme Court litigators – with strong government and private practice attorneys each with significant experience before the Supreme Court.

With the coding for wins, we can also look at the attorneys with the highest win rates in this set of cases.  The figure below provides these data. The figure shows the attorneys’ win rates on the left and the number of cases they participated in from this set on the right.

University of Washington’s Eric Schnapper won all three of the single vote margin cases he argued during the Roberts Court years with the cases Gross v. FBL Financial, Alabama Legislative Black Caucus v. Alabama, and United States v. Kwai Fun Wong.  Following Schnapper is Stanford Law School’s Supreme Court Clinic Director Jeffrey Fisher.  Rounding out the top five are Edwin Kneedler who is the most prolific government attorney with over 130 arguments before the Supreme Court, former-SG Ted Olson, and former-SG Gregory Garre. Like the attorneys on the overall wins list, the attorneys on the win rate list are all quite experienced and well-known Supreme Court attorneys.

These data show that the government and private parties often turn to the same group of repeat player attorneys in cases that will likely come down to outcomes with narrow margins.  Some of these attorneys are more successful than others, although it is near impossible to separate out the cases where lawyering made the difference in the composition of the majority.  Lastly, this shows that parties seeking to win contentious cases may wish to turn to specific attorneys with high success rates in close cases to argue their causes.  With multiple cases this term that might come down to closely split votes, these data may be especially relevant.