Perhaps the biggest development in the modern Supreme Court alongside the great discretion the justices now have in dictating the cases they hear is the role of interest groups.  Over the past several decades the Supreme Court has increasingly become the forum for such groups and their attempts at persuasion; the object of persuasion being the amicus brief.

Although groups filing amicus briefs do not always know ex-ante that the Court will shift policy with a decision, certain cases portend such outcomes more acutely than others.  Cases that lead the Court to rule statutes unconstitutional or to overturn its own precedent tend to have significant policy effects and the Court is often directed to such aspects of cases in early phases of litigation.  This post looks at the cases that led to such changes and at the groups most involved in them.

According to the United States Supreme Court Database, the Court has ruled a statute unconstitutional and/or has overturned its own precedent in 87 cases since the 2000 term.  Approximately 836 merits stage amicus briefs were filed in this set of cases or just under 10 briefs per case on average.  Several groups were clearly dominant in filing briefs on behalf of winning sides in these cases and consequently in moving policy in their preferred directions. Before getting to the groups though – a look at the issues at stake in the cases and the cases’ origins.

The cases come from a not so surprisingly breakdown of federal courts of appeal with the Ninth Circuit leading the way after state supreme courts.

The position of the Ninth and Sixth Circuits at the top of this figure are to be expected based on previous analyses like the one linked to above. Upon pulling the data through a finer toothed code some interesting nuances become apparent.  When the state court cases are broken down by state of origin we see the clusters of states with a disproportionate number of such cases.

Just under 15% of these cases originated in agency proceedings as well including in the Board of Immigration Appeals, Department of Agriculture, Department of Health and Human Services, and Internal Revenue Service.

There is also a clear split of the issues in these cases along ideological lines as the following figure with case issues and ideological direction (as coded in the Supreme Court Database) shows.  The minimum case count per issue in the figure is two.

The issues where the Court ruled in the conservative direction tend towards business and moneyed interests.  This is consistent with previous analyses of the Roberts Court.  Many of the issues on the liberal end deal with individual rights with the greatest number coming from First Amendment cases and those dealing with rights in the criminal sphere.

Certain groups have been particularly dominant in cases dealing with significant policy implications.  The issues dealt with in this set of cases foreshadow the most successful groups as they appear in the figure below.

Clearly groups dealing with individual rights lead the way.  The two top groups, the Cato Institute and the ACLU, make individual rights and liberties their top priority.  The third most successful group in this mix, the National Association of Criminal Defense Lawyers has been previously discussed on Empirical SCOTUS for their success as amici with their prominence in criminal cases.  The fourth most successful group, the Institute for Justice, like the first two groups discussed works defending individual rights and liberties.  These four groups all are associated with more wins in this set of decisions with significant policy implications than even the United States (as represented by the Office of the Solicitor General) has had since the 2000 term.  All groups on this list were associated with at least five successful representations before the Supreme Court in this time period.

The Cato Institute and ACLU were far away the winningest of these groups.  While the groups were both successful in many of the same cases including the litigation surrounding Guantanamo detainees’ rights in Boumediene v. Bush and the campaign finance litigation in Citizens United v. FEC, cases where only one group was involved or the two groups supported opposing sides of litigation convey differences between the groups.

The Cato Institute was involved in supporting litigation against Section 5 of the Voting Rights Act in Shelby County v. Holder on the basis of the federal government exerting too great a power in this area.  The ACLU on the other hand aided in the representation of the respondent-intervenors on the opposing side of the case.  The ACLU was also involved in protecting a woman’s right to abortion without substantially burdening laws in Whole Woman’s Health v. Hellerstedt.  The Cato Institute did not file a brief in this case While these distinct choices in litigation do not mean the other group necessarily has or had a divergent interest in each case (if one group did not file a brief), they do reflect the groups’ differing priorities.

Certain attorneys were central to each groups’ wins.  These counsels of record for the Cato Institute and ACLU are profiled in the following figure. 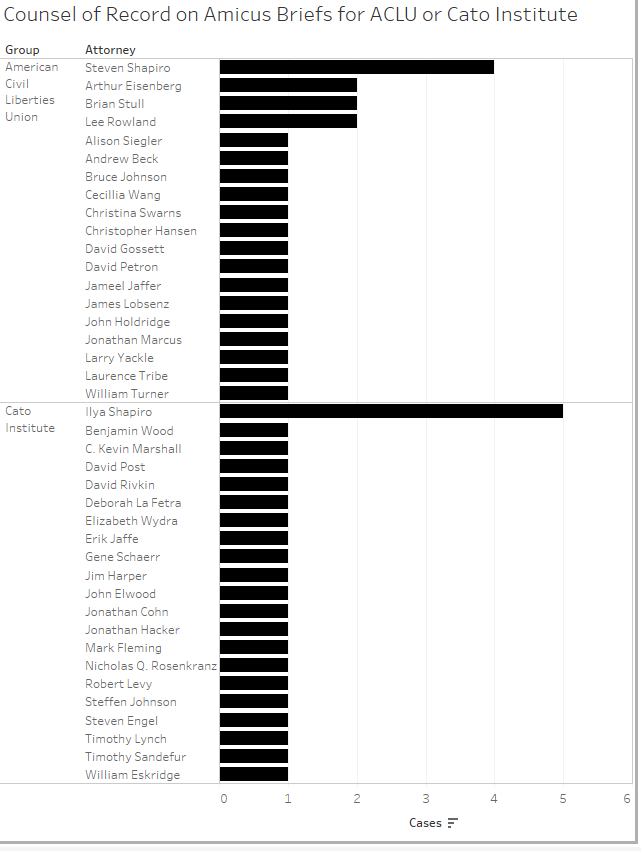 The attorney with the most success for either group, Ilya Shapiro, was also described in another recent Empirical SCOTUS post looking at active amici this term.  Other Cato Institutes other attorneys as well as outside counsel were spread evenly about the briefs.  These other attorneys include some of the top current Supreme Court advocates including John Elwood and Jonathan Hacker.

The ACLU had several attorneys in this set with multiple wins including Steven Shapiro with three and Arthur Eisenberg and Brian Stull each with two.The ACLU also teamed up with attorneys quite well known to Supreme Court circles including Constitutional scholar and Harvard Law Professor Laurence Tribe.

The majority opinions in the set of cases where the Cato Institute and/or ACLU were victorious were also decided predominately by a subset of justices.

Justice Kennedy who authored the most of these decisions has been described as not long for the Court in many recent news articles (for example from today’s New York Times h/t How Appealing). As the swing justice in many of these cases, his absence and a new justice in his stead could easily shift the outcome of similar cases in the future. What this will mean in the arena of individual rights is yet to be seen, but if this change occurs, its reverberations in the arena of individual rights and liberties may be felt for years to come.