The Court’s opinions have been sliced, diced, and dissected in various fashions over the years as scholars and practitioners look for overt and latent meanings in the Court’s texts.  An object of study has often been the dissenting opinion.  The dissent is an interesting point of focus because both because of its purpose and its impetus.  Its purpose is not only to explain an alternate view of a case decision, but also to possibly spur doctrinal change at some point in the future.  Its impetus is from a disagreement among the justices.  Since dissents are wholly discretionary, we know that a justice felt sufficiently miffed by an outcome that he or she decided it worthwhile to pen an explanation for why the decision was incorrect and how the case should have been correctly decided.  We have thousands of examples of dissents over the years.  This post attempts to gauge the justices that have spent the most time and energy on dissenting opinions through a comparison of the actual justices’ dissents. To do this, I examined all of the justices’ dissents to signed opinions (dissents to orders are excluded) written between the 1980 term and the present.

The proxy measure I use for time and energy is the number of words each justice wrote in dissenting opinions across this time period. While this measure may be an imperfect characterization of time spent on dissents, it provides a means to differentiate the extent of the justices’ dissents based on the dissents’ content and moving beyond the justices’ votes in isolation.

When we look at the written dissents over these years there are clear distinctions between the justices’ dissenting opinions counts.

Justice Stevens wrote more than twice as many dissents as any other justice since 1980 with 584.  Justice Scalia comes next with 256 dissents.  Justice Thomas is the current justice with the most written dissents with 220 followed by Justice Breyer with 183. The most recently confirmed justices have the fewest written dissents although Justice Alito has substantially more than Justice Roberts (both were confirmed in 2005 and Justice Alito not until part of the way through the term) with 75 compared to 48.  Justice Roberts’ lower dissent count might relate to his position as Chief Justice though as justices in this role traditionally attempt to bring the justices’ together rather than express their disagreements with the Court’s results.

The words of dissents are the objects of interest here, however. There has been a tendency to write lengthier dissents over the years between 1980 and 2017 as the figure below shows

The average dissent is almost 500 words longer now than it was at the beginning of this period. Some justices helped this tendency along more than others.  The next figure looks at the justices average number of words per written dissent. 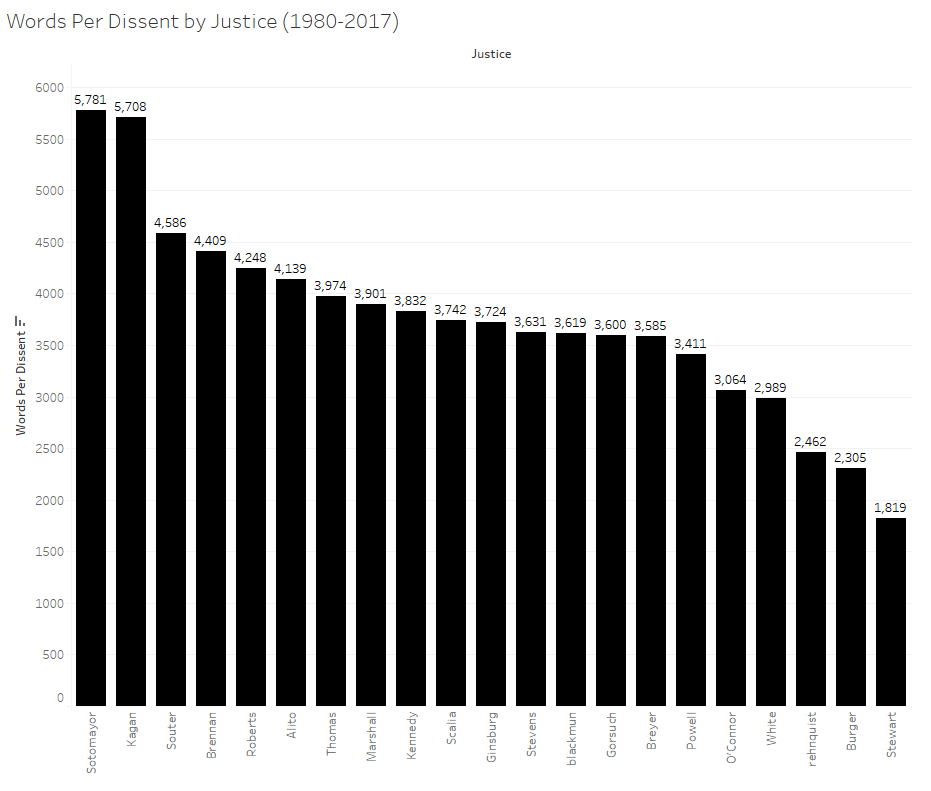 Particular dissents were more influential in the justices’ word counts than others.  The ten lengthiest dissents since 1980 are captured in the following figure.

Justice Stevens’ dissent in Citizens United is far and away the longest of the bunch.  Dissents in several other landmark cases make this list including Justice Stevens’ dissent in McDonald v. Chicago and both Justice Scalia, Thomas, Kennedy, and Alito’s joint dissent and Justice Ginsburg’s partial dissent in the first Obamacare case – National Federation of Independent Business v. Sebelius (the only case with two dissents making this list).

With these dissents we can also peer into dissent analytics in novel ways. One way is to separate out dissent words by the justices votes. Which justice wrote the most dissent words for every one of their merits votes between 1980 and 2017? The following figure provides these results.

Justice Stevens is atop the crowd eking out Justice Brennan by about 30 dissent words per vote. There is a big dropoff to the current justices with Justice Sotomayor leading the way with 398.8 words per vote.

Perhaps though a more proper metric is dissenting words per dissenting votes as this gauges effort spent dissenting based on the justices’ total dissents.  Below is a figure showing the results of this measure. 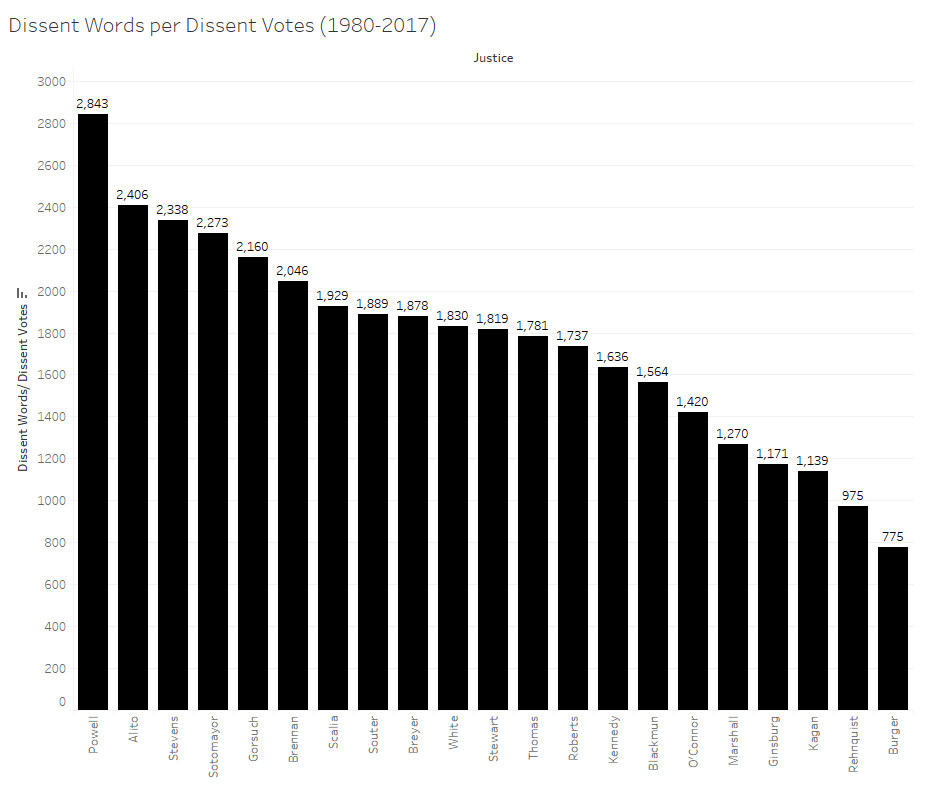 Diving a bit deeper into the current justices’ dissents we can look at the number of the justices’ written dissents per all of their dissenting votes.  This is another measure of energy as we can see the justices’ that expended more time cultivating dissents rather than signing on to the dissents of others.

While Justice Gorsuch leads the way, his minimal number of dissents do not tell us very much about the justice.  The other justices with over 50% written dissents for all dissenting votes are Justices Alito and Breyer. Justice Kagan writes the fewest dissents per dissent vote at only just over 22%.

The information in this post tells us several important things about the current justices’ dissenting practices.  Justice Thomas dissents most frequently. This is not an entirely new revelation as he has far out-dissented the other justices in the past several terms based on his number of dissents.  In terms of energy spent dissenting on a per dissent basis, we have several current justices near the top.  Justices Sotomayor and Kagan lead the way with words per dissent.  Since Justice Sotomayor wrote more than twice as many dissents for this period as Justice Kagan, Justice Sotomayor is the more substantial dissenter of the two.  In any case, the time these two justices likely spend (along with their clerks) preparing dissents breaks new ground for this Court.  Justice Alito is also a heavy dissenter based on his dissent words per dissent votes and his percentage of written dissents based on his entire set of his dissenting votes.

The modern Court is more prone to lengthy dissents than the Court has been in the past.  We very well might see these numbers continue to increase over time, especially if the justices continue to write fewer majority opinions per term.  This will help increasingly highlight the importance of dissenting opinions in the future.