Supreme Court opinions come in all different shapes and sizes.  Some are short and sweet, others are dense, long, and hard to follow.  Some reasons behind relative opinion length are obvious.  Even though the justices tend not to grant cases with facile solutions, certain cases are more complex and involve extensive fact patterns.  Along with the superficial reasons that define an opinion’s length, other factors lay below the surface.  Justices have distinct writing patterns. Some believe in brevity while others are quite verbose.

Just this term we have seen variation of over 5,000 words in opinion length between the Court’s longest majority opinion, Jennings v. Rodriguez and the shortest opinion, Murphy v. Smith.  At 8,824 words though Jennings doesn’t hold a candle to last years longest signed majority opinion in Cooper v. Harris which runs 10,773 words.

The average number of opinion words changes over time as well.  As this post tracks signed majority opinions written between 1951 and the end of the 2013 term, the average majority opinion length by term is displayed below along with a trend line and 95% confidence interval. 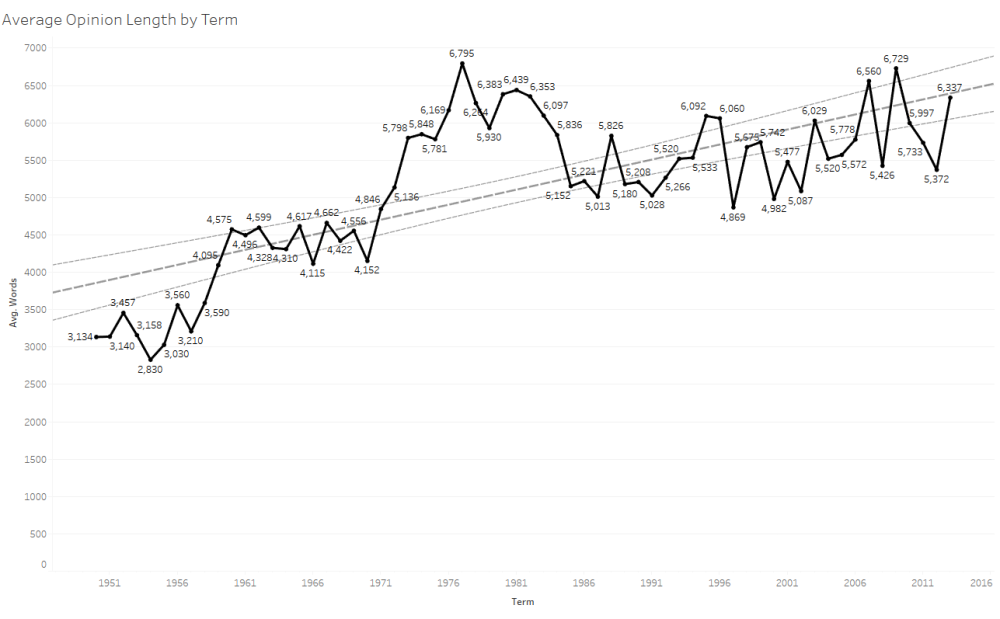 As this graph shows, the mean majority opinion length steadily increased from under 4,000 words to over 6,000 words across this period.

Building on the importance of the majority coalition, we can also examine opinion length depending on the difference in the size of the Court’s majority versus dissenting voters. 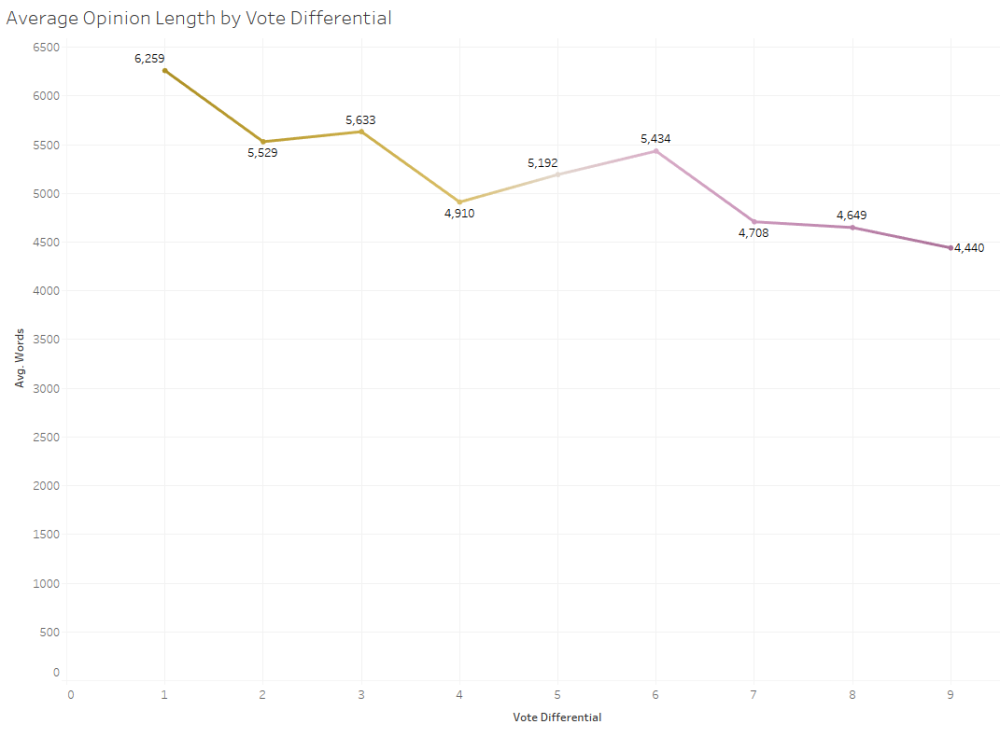 Perhaps not surprisingly opinions with the the closest opinions votes averaged significantly more words than unanimous opinions and this trend was relatively consistent for the increments in between.

The difference in majority opinion size is also evident when clustering opinions by certain characteristics. Using the Supreme Court Database, I grouped opinions according to coding by issue.  To ensure the correlations were not based on idiosyncratic instances I only used issues coded in at least 25 cases. Issues with opinions that averaged at least 5,000 words are displayed below. 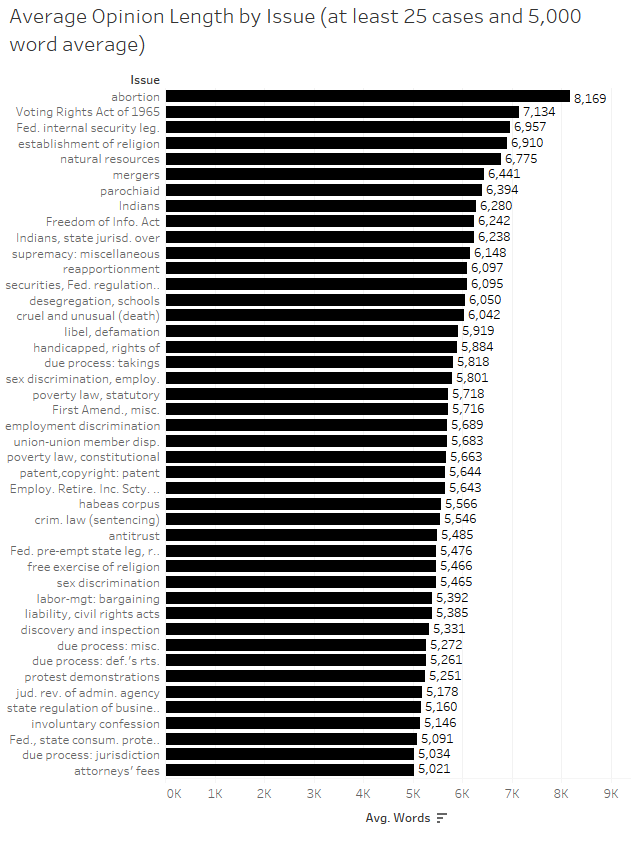 Based on the issue coding the issue inherent in the longest average opinions is abortion. Abortion opinions like Roe v. Wade and Planned Parenthood v. Casey are long not only in an effort to please a majority coalition, but also to explain the nuances of what makes certain behavior legal and certain behavior not.  The complexity of abortion law is also evident in the constantly changing state laws (see e.g. the recent legislation in Mississippi) that attempt to track the boundaries under the Court’s interpretation of the Constitution.

Cases dealing with facets of the Constitution and Amendments like the Establishment Clause also hit on contentious issues where jurisprudence is constantly evolving to the strictures of the law (and its interpretation). Cases dealing with complex issues like mergers also fall towards the top of the word length list.  Also, cases with issues like natural resources which often examine agencies interpretations lead to lengthy opinions.

Even though the Court’s examination of agencies’ interpretations often lead to extensive majority opinions, they do not always do so.  The following figure looks at the difference in opinion word length depending on the agency whose decision the Court ultimately examined. 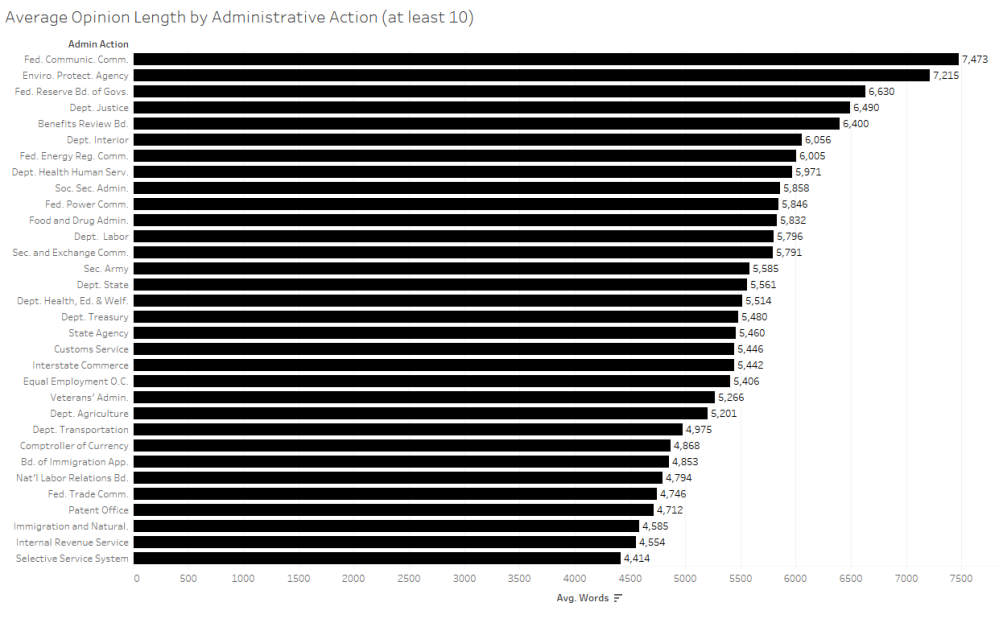 Moving back to the issue of opinion assignment, the assigner may have an influence on opinion length often related to the majority coalition and issue of the case.

For that reason two associate justice opinion assigners averaged higher word counts than any chief justice over this period. Justices Stevens and Brennan tended to vote alongside the more liberal justices during the Burger and Rehnquist Court years.  In accordance with the notion that recent opinions tend to be longer than older ones, opinions assigned by Chief Justice Roberts are the next longest on average.

But perhaps more interesting than looking at majority assigner is the figure displaying the authoring justices’ relative opinion lengths. 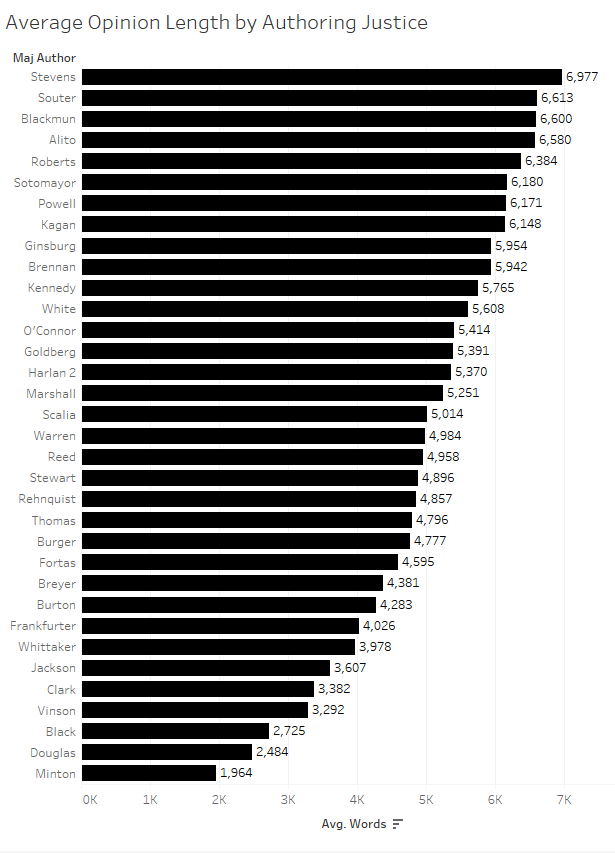 Interestingly, Justice Stevens is also top of the list ranking justices by their average opinion length. Justice Stevens who was also the most common dissenter while on the Court was often the liberal voice on a conservative Court.  Justice Souter, another typically liberal justice who sat alongside Justice Stevens, comes next on this list followed by Justice Blackmun who authored among other opinions the 11,787 word abortion opinion Roe v. Wade.  On the other end of the spectrum, justices who sat on the Court near the middle of the 20th century dominate the bottom of this figure.

Looking at the justices with a finer toothed comb, the next figure breaks down average opinion length by justice and by the general case area.  This figure only focuses on instances where justices authored at least five majority opinions in a given issue area. 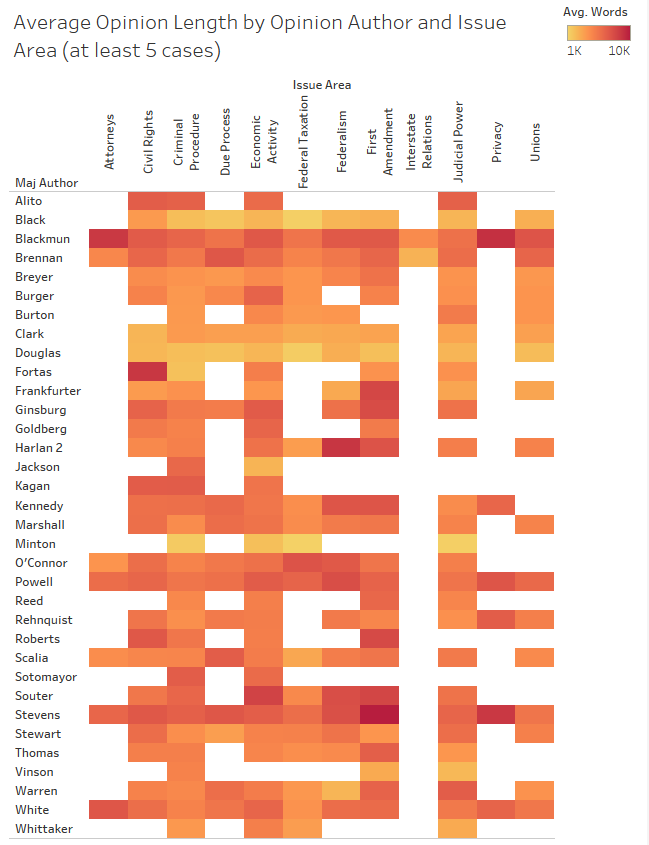 This figure shows, for instance, that Justice Blackmun’s opinions dealing with attorneys averaged over 10,000 words.  This set includes Justice Blackmun’s 11,526 word opinion in Bates v. State Bar of Arizona.  Conversely, Justice Scalia’s federal tax opinions such as the 2,744 word opinion in Commissioner v. Bollinger averaged on the short end of the length spectrum.

One of the more interesting questions that can be answered with this data is which signed opinions were the lengthiest across this period.  The following figure has the answer to this. 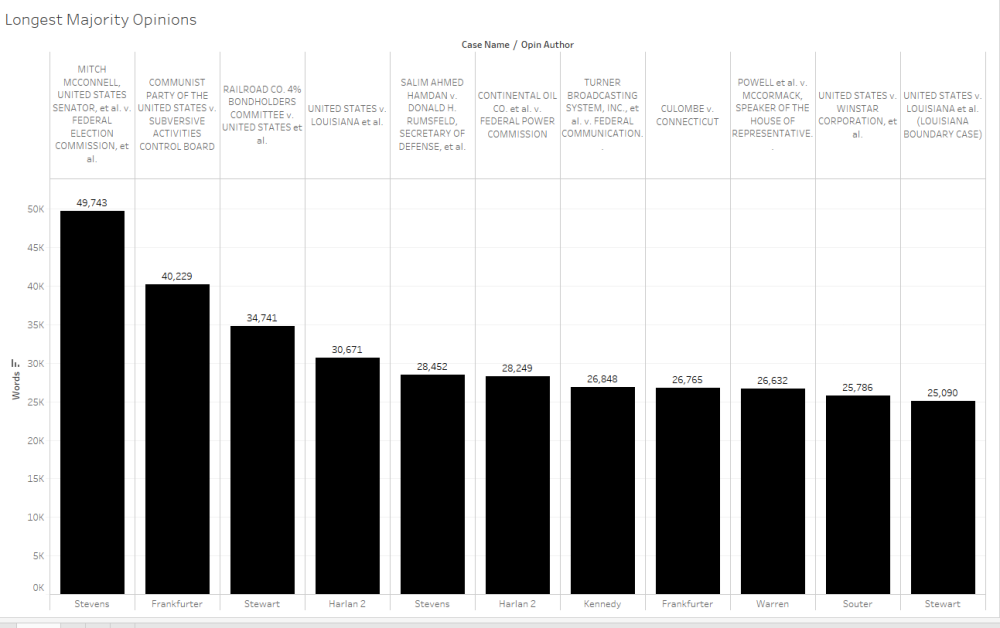 Only two signed opinions, those in McConnell v. FEC and Communist Party v. Subversive Activities Control Board, were over 40,000 words long.  This also shows that opinions closer to 25,000 words were much more common than much longer ones.  Two Louisiana boundary opinions are both in the top 11.  Justice Stevens, the justice with the longest opinions on average has two in this figure with McConnell and Hamdan v. Rumsfeld.  Interestingly, so do justices Frankfurter, Harlan, and Stewart.  The only sitting justice with an opinion in this figure is Justice Kennedy with his opinion in TBS v. FCC.

If the Court continues to have smaller and smaller caseloads each term we may continue to see opinion lengths grow.  Although the opinions this term have by no means been short (they are 4,876 words long on average) we are fewer than 20 signed opinions deep in the term. The more contentious and lengthy decisions tend to come towards latter part of the term.  Last term’s longest opinion in Cooper v. Harris was released in May.  We may expect to see the average for this term increase by several thousand but this will only be possible if the justices author much longer opinions on average for the remainder of the term.