In 1986 when Justice Scalia joined the Supreme Court, the bench looked quite different than it does today. In fact, none of the justices on that Court still sit on the Supreme Court as Scalia was the final holdout.  In 1986 the Court was composed of five justices who were predominately ideologically conservative and four justices that were predominately liberal. Now in 2018, one year after Justice Gorsuch joined the Court and over two years since Scalia’s death, the landscape is quite different. Not only are there a changed set of faces on the Court, but there are changed dynamics between the justices and new dominant personalities. This post reflects on the impact Gorsuch has made on the Court’s decision making and looks back to compare this with the changing Court dynamics when the other sitting justices and Scalia joined the Court.

Gorsuch joined the Court at a unique time. While there is much discussion about how this Court could be the moving towards the right, especially if Justice Kennedy (or any of the more liberal justices) retires with a Republican President at the helm, other statistics show the Court at the present is actually more ideologically liberal than it has been in years.  According to the Martin-Quinn (MQ) Scores, the ideological metric commonly used to measure the relative positions of Supreme Court justices, at the end of last term the Court was the only one in recent memory with five primarily liberal justices and four predominately conservative justices (scores greater than zero denote conservatives while less than zero denote liberals).  The justices scores at the end of the 2016 term, Gorsuch’s first partial term on the Court, look as follows:

Not only does Kennedy’s score from the 2016 term place him as the fifth liberal justice, but the average score across all justices is in liberal territory.  With over thirty decisions under his belt Gorsuch has now shown that he is a worthy conservative successor to Scalia. According to the scores from the end of last term, Gorsuch was the second most conservative justice on the Court after Justice Thomas.  This position was helped by the fact that Gorsuch voted alongside Thomas in every decision he participated in last term.

Although Gorsuch has not continued to vote alongside Thomas in every instance, he has in most. The next figure shows Gorsuch’s voting alignment with the other justices on the Court through his first 30 votes relating to slip opinions (the actual number of votes is 32 as his 30th vote was given on the same day as two other votes). 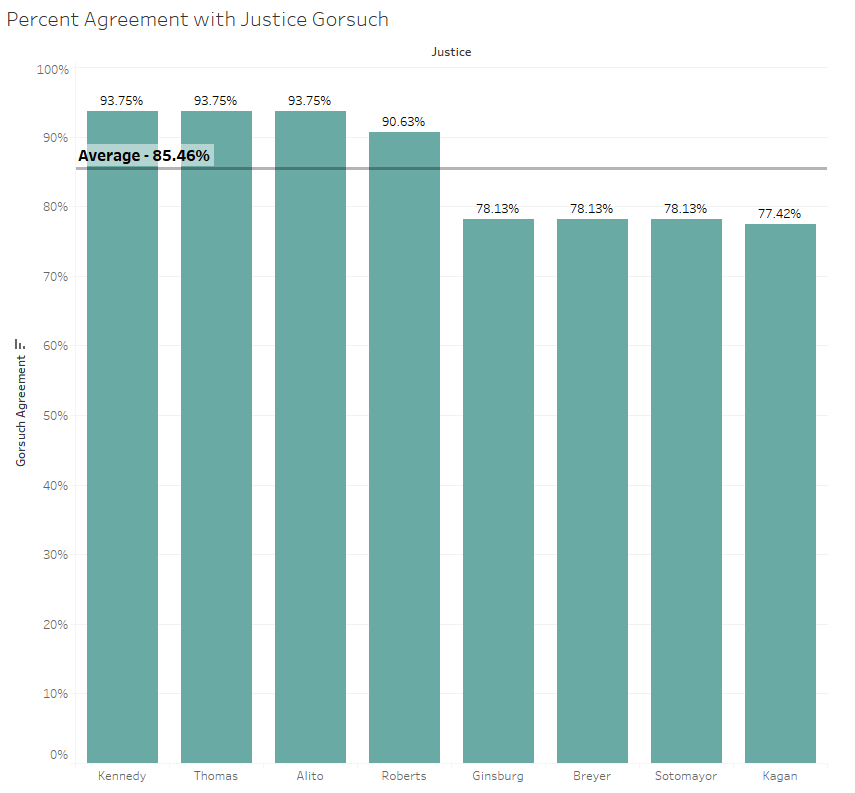 Through this set of decisions, Gorsuch voted the same way as Kennedy, Thomas, and Alito each 93.75% of the time.  Gorscuh’s alignment with Roberts is close behind with an alignment of 90.63%, while none of the more liberal justices have above 80% agreement with Gorsuch.  Gorsuch’s average agreement percentage of 85.46% is right in the middle of those for the other justices. Within the set of Justice Gorsuch’s first 32 votes he dissented six times, wrote four majority opinions and authored three dissents.  75% of these decisions (24 of 32) were unanimous.

Now looking back to when Gorsuch’s predecessor, Justice Scalia joined the Court, we see a very different set of justices on the bench. The ideological balance of the Court according to MQ Scores at the end of the 1986 term, Justice Scalia’s first on the Court, looks as follows:

Like Gorsuch, Scalia was the second most conservative justice according to these scores at the end of his first term. Only Justice Rehnquist ranked more conservative.  While the average ideological score was also negative, this was due to the highly negative scores of Justices Brennan and Marshall. Unlike the lay of the land when Gorsuch joined the Court, the Court had a clear five justice conservative majority at the end of Scalia’s first year.

Scalia’s average agreement score from his first 30 votes is a quite a bit lower than Gorsuch’s at 77.08%. The difference between Scalia’s alignment with the more conservative justices and the somewhat liberal Justice Blackmun, for instance, is not particularly stark.  This can be compared with the large degree of difference in Scalia’s votes from those of Marshall even at the outset of Scalia’s tenure on the Court.

Scalia authored two majority opinions and one dissent across his first 30 votes. Within this set he dissented three times. Ten of the first 30 votes he participated in were decided by a unanimous Court.

Justice Kennedy joined the Court in the following term -1987 – when the Court was substantially similar in composition to that when Justice Scalia was confirmed.

Over his first term Kennedy was the fourth most conservative justice and had a very similar score to that of his predecessor, Justice Powell, in his final years on the Court.

Kennedy had a higher average agreement rate across his first 30 votes than Scalia. 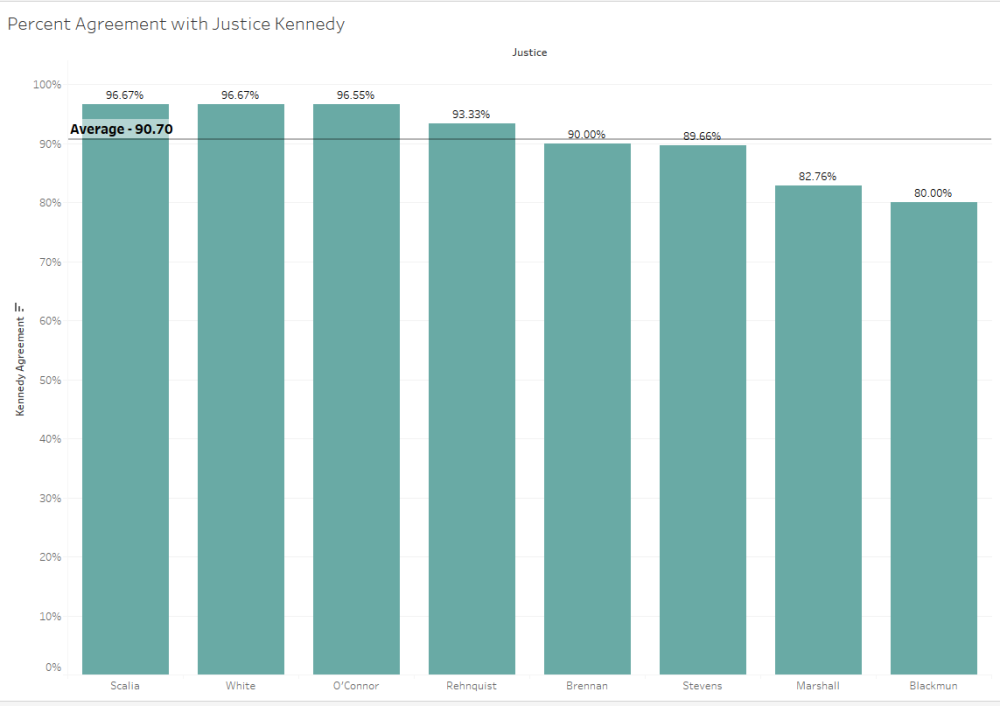 While Kennedy aligned more closely with the more conservative justices at the time, he voted in the same direction as the predominately liberal Justice Brennan 90% of the time through this set of cases.  Just as he does now, Kennedy had a high level agreement with most justices when he joined the Court in the 1987 term.  Kennedy only dissented once across his first 30 votes and didn’t author a single dissent in those instances. He did author two majority opinions within this set and 23 decisions of his first 30 votes were decided by unanimous votes.

By the time Justice Thomas joined the Court in the 1991 term the balance of the justices was tipped farther in the conservative direction.

Only Stevens and Blackmun were liberal holdouts at this point. Thomas was unique among the justices examined in this post as the only one who was the most conservative justice in his first term on the Court. The Court’s average MQ Score at this time was well into conservative territory at .733. 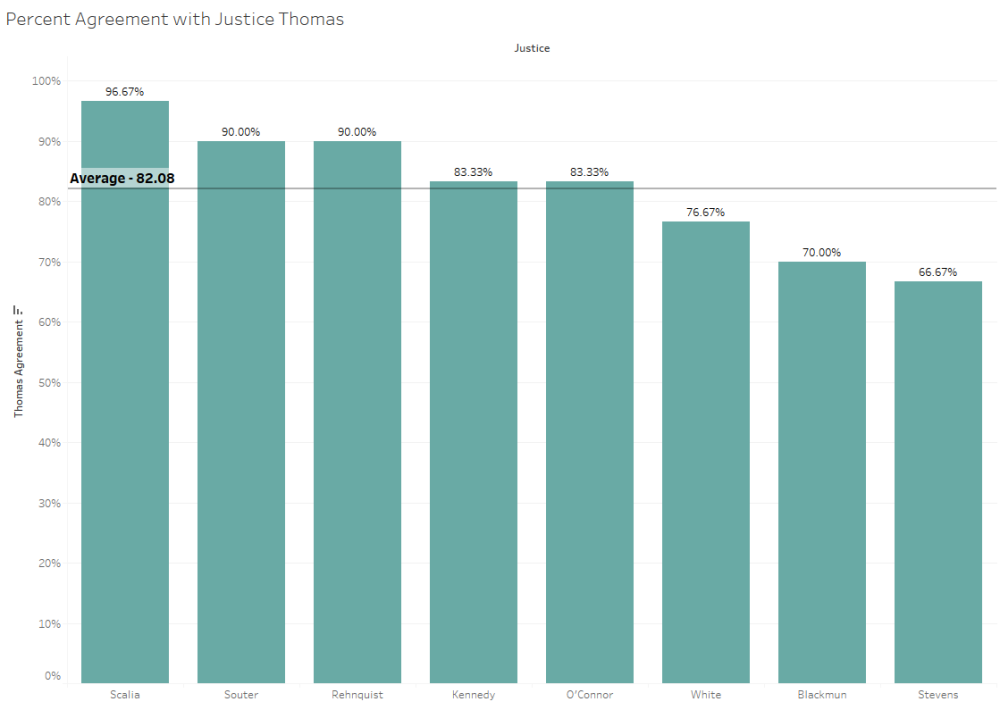 Across his first 30 votes, Justice Thomas agreed in almost every instance with Justice Scalia. This level of agreement was even higher than that for Justices Thomas and Gorsuch across Justice Gorsuch’s first 30 votes. There is large variation in Justice Thomas’ agreement rates as the range spans from 96.67% down to 66.67% (between Justices Thomas and Stevens). Justice Thomas dissented four times across his first 30 votes and was the only justice among the ones discussed in this post to author a solo dissent in his set.  He wrote three total dissents as well as five majority opinions in these cases. 20 of the first 30 decisions reached after Thomas joined the Court were achieved through unanimous votes.

Justice Ginsburg helped move the Court back in a liberal direction even though her ideology score was only slightly liberal in her first term on the Court.

The Court was still predominately conservative when Ginsburg joined and the average MQ Score was also in conservative territory.

Justice Ginsburg had one of the higher levels of agreement with the other justices across her first thirty votes. 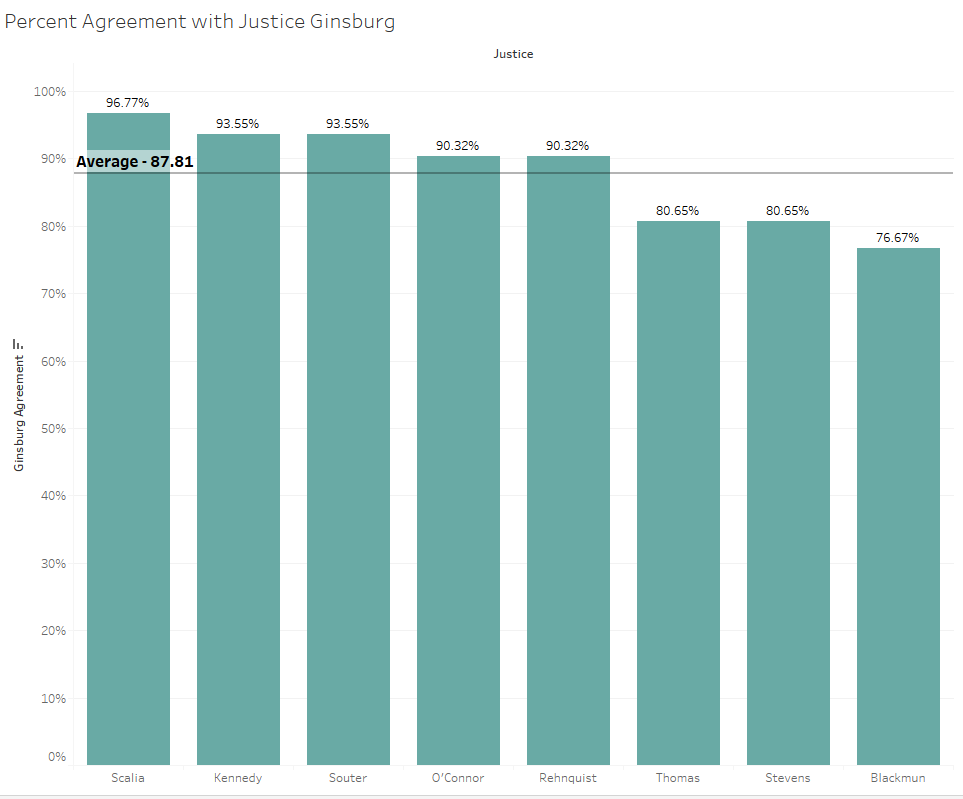 Ginsburg had a quite unique first 30 voting decisions (31 actually as two were made on the same day after her 29th vote). She authored more decisions in her first set than any of the other justices discussed with ten and all were majority opinions.  This is now not surprising given Ginsburg’s continued efficiency writing opinions.  She was also the only justice described in this post to only vote in the majority in each of her first 30-odd votes.  17 of her first 31 votes were made in unanimous decisions.

Breyer’s voting alignment with the other justices was below that for Justice Ginsburg across his first 32 votes though. 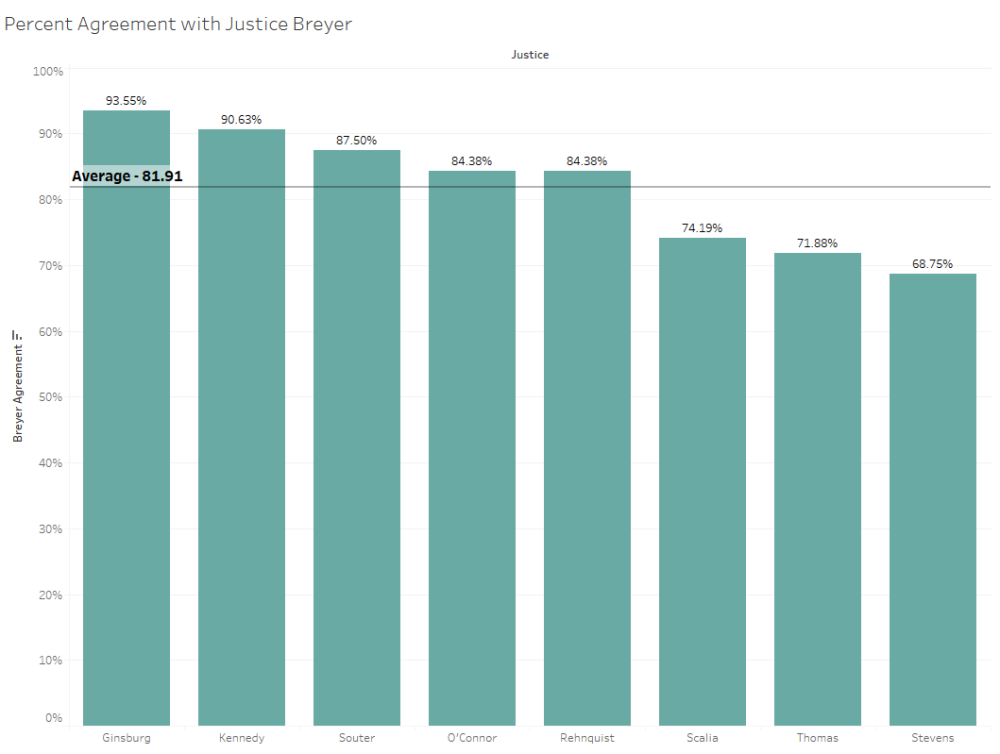 Across his first 32 votes, Breyer dissented twice while authoring three majority opinions and one dissent.  13 of these 32 decisions were made by unanimous votes.

Justices Roberts and Alito both joined the Court during the 2005 term although Justice Roberts joined at the beginning of the term and Justice Alito joined several months later.  Both Justices turned out to be very reliable conservative votes.

These justices MQ Scores at the end of the 2005 term were quite similar to one another and placed them as the third and fourth most conservative justices on the Court.  The Court still had a 5-4 conservative balance at the time although only slightly as Justice O’Connor had slipped to an almost neutral position by her final term in 2005.

Chief Justice Roberts along with Justice Kennedy were the only two justices to average over 90% alignment across justices during their first 30 votes (33 for Justice Roberts as he had multiple votes on the same day as his 30th) on the Court.

Roberts was one of only two justices in this post to have 100% alignment with another justice during his first set of votes. This high level of alignment was between Roberts and Scalia.  Note that not even Thomas and Gorsuch aligned this strongly across Gorsuch’s first 30 votes on the Court.  Roberts shared over 90% of the same votes with the more liberal Breyer and Souter and only slightly below 90% with the even more liberal Ginsburg and Stevens.

Across his first 33 votes Roberts only dissented once. He also only authored two opinions, both majorities with no authored dissents. 25 of Justice Roberts first 33 decisions were decided by unanimous votes.

Justice Alito who joined the Court later in the 2005 term had a lower average alignment with other justices at 84.8%.

By the time Justice Sotomayor joined the Court, the justices were moving into more liberal territory.

According to her MQ Score, Justice Sotomayor was the third most liberal justice by the end of her first term – more liberal than Justice Breyer while less so compared to Justices Ginsburg and Stevens.

Justice Sotomayor’s average voting alignment with other justices across her first 31 votes was quite similar to that of Justice Gorsuch’s. 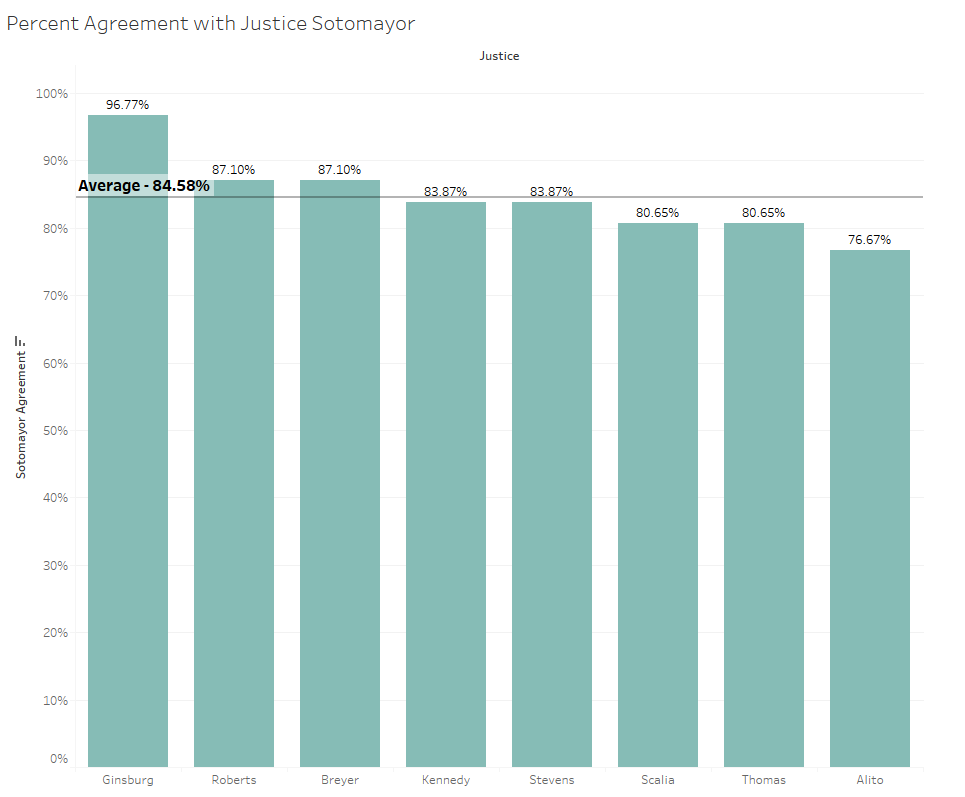 Aside from Sotomayor’s high alignment with Ginsburg, Sotomayor actually aligned next closely with the more conservative Roberts. Sotomayor shared the fewest number of votes with Alito.

Although Sotomayor dissented four times across her first 31 votes she did not author any of these dissents. She did, however, author three majority decisions in this set.  19 of the first 31 decisions that Justice Sotomayor voted in were decided by unanimous votes.

By the time Kagan joined the Court, she became the fourth strong liberal vote.  At this time though Kennedy still voted predominately alongside the more conservative justices and this helped prop up the average MQ Score for the 2010 term.

Kagan’s average voting alignment with the other justices across her first 31 votes was just below that for Sotomayor at 83.87%.