The Democrats are in a precarious position in the latest battle for a seat on the Supreme Court. Many Democrats oppose Kavanaugh’s nomination and will not vote to confirm him. Others are requesting that the Senate hold off on voting on Kavanaugh’s confirmation until the National Archives produces the record setting million or so pages of documents from Kavanaugh’s work in the federal government.  The Democrats’ strategy is twofold. First, if they can push the vote until after the midterm elections they may gain a majority in the House, Senate, or both, potentially giving them greater leverage over the confirmation process. Second, some of the documents, specifically those from when Kavanaugh worked as White House Counsel under President George W. Bush, might paint a more contentious picture of Kavanaugh and one that makes him less characterizable as a confirmable candidate.

As several articles have pointed out though, the chances that the vote timing gets stretched past midterm elections are incredibly slim and stretching the timeline closer to midterm elections might hurt Democrats running for office.  Since the Democrats lack a majority of votes in the Senate, there is little they can do to slow the process set forth by Senator McConnell aside from trying to sway potential swing Republican Senators away from a pro-Kavanaugh vote (or to push for a vote past the midterms).

With a Republican majority in the Senate, convincing any Republican Senators to oppose the vote as planned may be an impossible task. The vast majority of Republican Senators have already declared support for Kavanaugh and are not viable options for persuasion.  Even with the recent death of Senator McCain, in order to prevent an easy road for Kavanaugh to the Supreme Court, the Democrats will have to sway at least one Republican Senator to either not vote prior to midterm elections or to vote against Kavanaugh’s confirmation.

An additional problem for Democrats though is that it seems more plausible that Democrat Senators will flip and support Kavanaugh than Republican Senators will flip and vote against Kavanaugh.  The last several Supreme Court confirmation votes help to shed some light on this [Note: the data in this post goes back to Bork’s failed confirmation in 1987]. 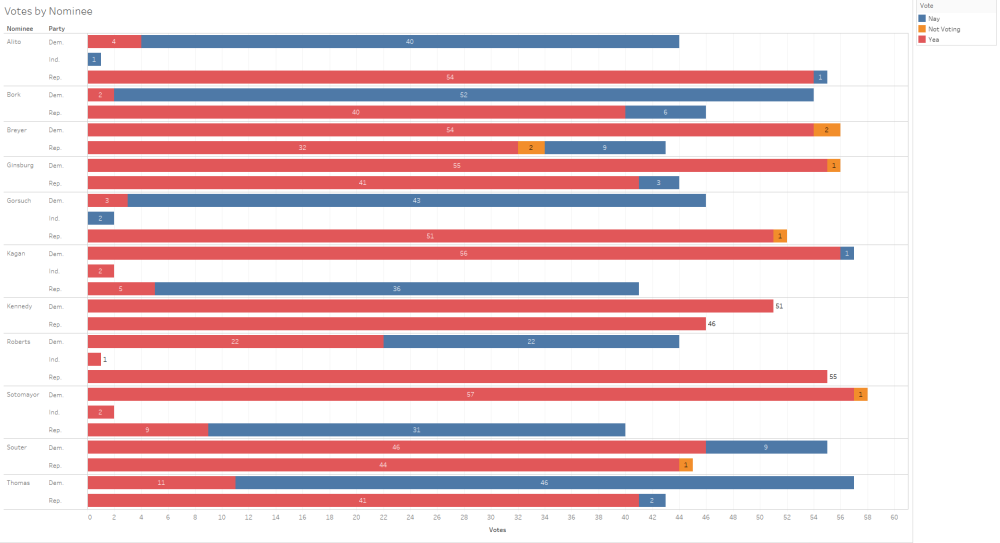 These data can be parsed somewhat differently when Senators are separated by state.  This figure helps us look at the consistency of party line votes by Senators’ states and parties. 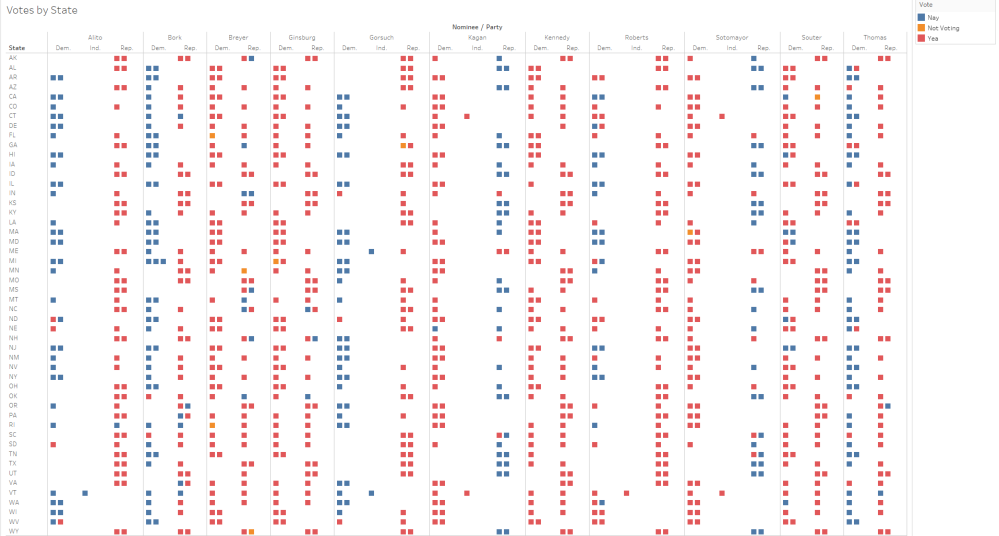 Since we know that Democrat Senators from North Dakota (Heitkamp), West Virginia (Manchin), and Indiana (Donnelly) voted in support of Gorsuch’s confirmation, and they are perceived as possible votes for Kavanaugh this time around, they seem good places to start.

Not all cross-party votes are equal though.  One way that positions within parties can be located is through votes. Poole and Rosenthal’s Voteview Project provides ideology scores (Nominate Scores) for all members of Congress across time based on their scaled roll call votes.  Senators’ relative ideologies should help gauge the likelihood that they will vote for nominees across party lines since Senators of one party located closest to members of the opposing party theoretically share the largest set of preferences with those in the opposing party.

Poole and Rosenthal’s scores which run from -1 to +1 go through the current 115th Congress.  The landscape of the current Senators’ scores is depicted below.

We can focus these scores on those of members of both parties that voted across party lines in favor of nominees since and including Bork. 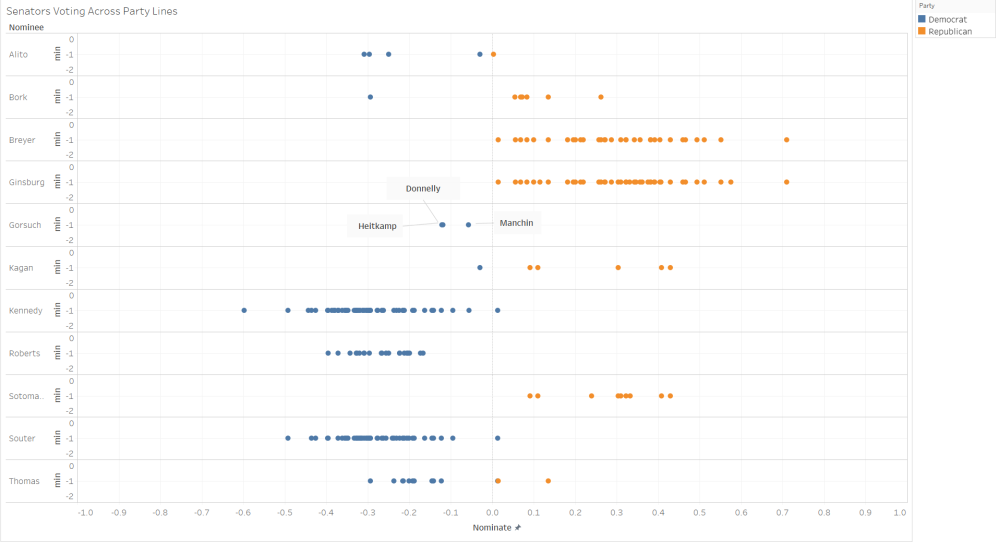 Some nominees were able to garner cross-party votes from many Senators. Looking at graphs for Breyer, Ginsburg, Kennedy, and Souter we see large variation in the ideology scores of these Senators.  Focusing on other instances, though like with the nominations of Alito, Thomas, and even Bork, and to a lesser extent Kagan and Sotomayor, we see that most of the cross-party votes are relatively close ideologically to a moderate score of zero.  All three Democrat Senators that voted in support of Gorsuch – Manchin, Donnelly, and Heitkamp – were also located towards the moderate end of the liberal spectrum.

While looking at these cross-party votes in isolation provides insight into these specific votes, additional context is provided by comparing these Senators’ scores to those of the other Senators that voted on the same confirmations.  The figure below shows the relative ideology scores of all Senators’ that voted on the nominees by their party and votes. 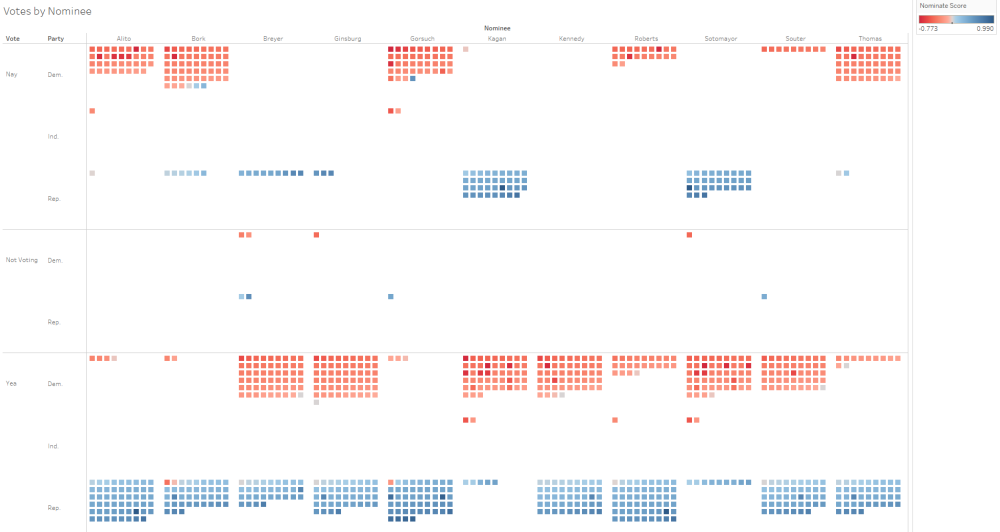 Here we see, as expected, that the cross-party votes in cases where there were only few such votes (as with Gorsuch), tend to be depicted in lighter blue and red hues than the average ideology scores for members of each party.

Based on several articles (such as here in Vox and here in CNN) describing the Senators’ positions on Kavanaugh, two to three Republican Senators and seven or so Democrat Senators’ votes are still undecided (the Vox article reports that both Independent Party Senators are likely to vote against Kavanaugh’s confirmation).  When we place these Senators on the Nominate Scale on independent axes we find the following ideological positions.

The first Republican Senator though, Jeff Flake, is quite conservative and while he is known not be a fan of Trump’s, he also has spoken words of high praise for Kavanaugh.  There was speculation at one point that Flake might be out of the country at the time of the confirmation vote but Flake has since clarified that he will be back by that time.

Senator Susan Collins has also yet to express a firm position on Kavanaugh and some speculated that she might be concerned about the possibility that Kavanaugh would vote to overturn the Court’s precedent Roe v. Wade.  After meeting with Kavanaugh though, multiple outlets reported that her concerns seemed mollified by Kavanaugh’s assertion that Roe is “settled law.”

Putting aside the question of how Kavanaugh would rule on Roe if faced with the possibility of overturning it for a second, Senator Collins should take pause before accepting “settled law” as a barrier to Supreme Court adjudication.  The following chart based on data collected from the Supreme Court Database plots the number of times each term that the Court ruled a statute unconstitutional and the number of times the Court overturned its own precedent. Both types of laws were “settled” prior to the Court’s decisions. 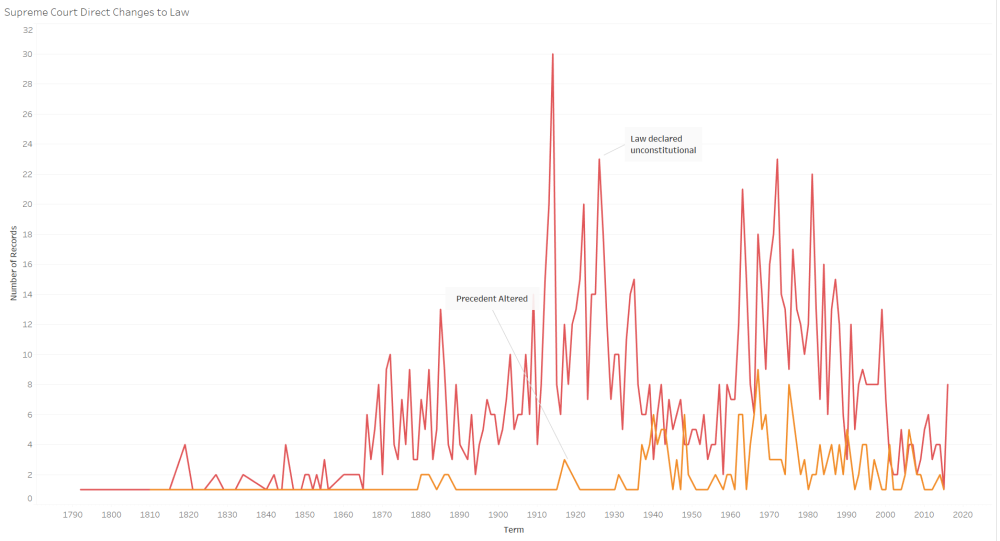 As the Court evolved, the justices clearly became more comfortable overturning “settled law.” While this does not allow us to infer Kavanaugh’s position on Roe, it does at very least provide insight that the Court is not bound to uphold “settled law” and that it has become increasingly comfortable with overturning precedent since the beginning of the 20th century.

Suffice it to say the path to Kavanaugh’s confirmation is clear. While there are potential hurdles there are no clear roadblocks. Alaskan Senator Murkowski may be the Democrats last bastion of hope (and only if all Democrats vote against Kavanaugh). Murkowski put out a statement after meeting with Kavanaugh that does not clearly set forth a position. Reports though indicate her likely support.

One factor potentially working against Kavanaugh is public opinion.  As the graph below shows, Kavanaugh has the lowest percentage of support for a nomination since Bork and has the second highest percentage of opinion not in favor of his confirmation in the same period after Harriet Miers. 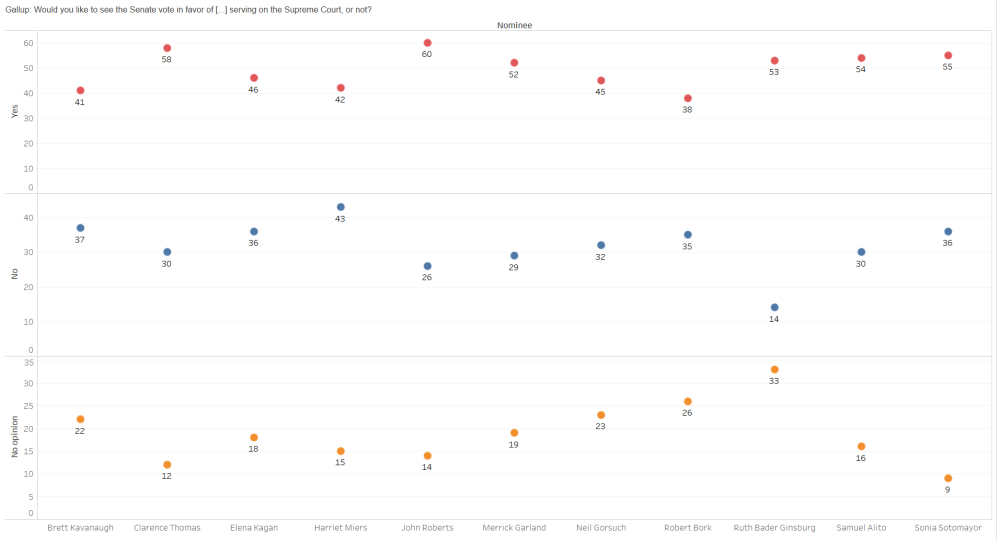 Public opinion only plays a role though if it affects Senators’ votes. As Senators seem increasingly polarized in their decisions on potential justices, public opinion may only have an impact, if any, at the margins.

As with the vote on Gorsuch’s confirmation, the new simple majority requirement for a confirmation will likely play a role as Republicans are unlikely to garner a supermajority vote.  The bottom line for Democrats is that unless they can sway a Republican Senator’s vote, they are likely out of options in opposing Kavanaugh’s confirmation.  While this is far from a done deal, this is clear an uphill battle for Democrats. If it is any consolation though there are many more conservative judges out there who are potential candidates for promotion to the Supreme Court, some of whom have already expressed opposition to Roe.