Supreme Court nominees’ confirmation hearings involve much dialogue between the nominees and senators.  In two chaotic days of hearings for Judge Kavanaugh, we have seen a full spectrum of behavior from both sides of the aisle.  Showboating aside, this is a genuinely important hearing for a crucial seat on the Court and hence emotions are running high.  While much of the discussion leading up to the hearings surrounded how nominees will not answer substantive questions, many still hope that this time around things might be different.  As scholars Paul Collins and Lori Ringhand have shown in a series of articles (for example), much can be learned about what we can expect from studying past confirmation hearings.

This post crunches data from the transcripts of the past four confirmation hearings — those for Gorsuch, Kagan, Sotomayor, and Alito– to see how senators’ speaking patterns and interactions with Supreme Court nominees shape the process.  These four hearings are also a nice mix because they showcase nominees from two democrat and two republican presidents.  It also shows how we can leverage more information from the transcripts than may be readily apparent from watching the hearings on TV.

The post looks at three main features from these hearings: the speech and interaction patterns, talking statistics, and the tone or sentiment of each speakers’ comments.  The underlying data which consists of several hundred transcript pages per nominee includes senators’ opening remarks and interaction with the nominees which were run through a package called qdap in R. The analysis ends before additional witnesses are called (some witnesses are incorporated in the analysis though if they spoke on the first or second days of the hearings).

Based on this analysis and the current state of politcs, we can expect an even more polarized process than we have seen in previous hearings where it should be hardly recognizable that Democrat and Republican Senators are speaking to the same nominee.

The post looks at these four nominees in chronological sequence based on the order in which they were nominated.

Graphs that track speech patterns look at the number of words spoken by each speaker and at the order of speakers. Moving sequentially through the nominees we begin with Alito.

Senator Arlen Specter was chairperson of Alito’s hearings. As such he (and all other chairpersons in these analyses) spoke the most of the senators present at the hearing.  Senator Hatch (R-UT) and Senator Leahy (D-VT) both took more opportunities to interject during the proceedings than their fellow senators.

Breaking this down to the word statistics shows the amount of speech per senator. The row categories are n.tot for total utterances, n.sent for number of sentences, n.words for word count, n.state for statement count, and n.quest for question count.

In terms of amount of speech, an interesting pattern is clear from these hearings. After Senator Specter, the chairperson, the next four most active speakers were democrats Leahy, Schumer, Feingold, and Kennedy.  Senator Schumer (D-NY) asked the most questions after Senator Specter followed by Senators Graham (R-SC) and Leahy.  Senator Schumer also had the most statements after the chairperson followed by Senators Leahy and Kennedy (D-MA).  Based on these stats alone we can see that the type and intensity of engagement differs between republicans and democrats.

Especially due to the hyper polarization of modern confirmation hearings, the amount of speech from a given senator says little about the about they will vote. In this instance all members of the Senate Judiciary Committee voted along party lines with republicans voting in support of Alito’s confirmation and democrats voting against it.

How about the tone of the senators’ comments? Note that the sentiment dictionary is not law or politics specific and so it might not pick up on all of the linguistic nuances. It does provide a useful gauge though of the relative tone of each senator’s comments though. The scores range from +1 for a positive sentiment to -1 for a negative sentiment with zero as neutral.

First of all, although all senators incorporate words with a negative sentiment into their speech, all of the average sentiments were at least neutral (this tends to be the case across nominees).  This also shows, at least at first blush, that the senators’ parties did not lead to their ranking in terms of the relative positivity in their remarks.  While four Democrats: Leahy, Durbin, Biden, and Schumer ranked low on positive tone relative to other senators, so did two Republicans: Coburn (who had the lowest sentiment score) and DeWine.  While Democratic Senators Kohl was not the most active speaker at the hearings, he had the most positive sentiment score of the senators followed by the chairperson, Senator Specter. Senator Lautenberg did not sit on the Senate Judiciary Committee.

Senator Leahy was the chairperson for Sotomayor’s hearings. He spoke the most of the senators as is evident in the figure below.

Senator Sessions took the most interaction turns with Sotomayor although many senators took multiple speaking opportunities during the hearings.  This further bears out in the word statistic data.

Following the pattern of Alito’s hearings, after the chairperson, Senator Leahy, the most active speaking senators were eight republicans before the most active Democrat, Senator Feingold (Feingold spoke 1,000 fewer words than Senator Specter who was the next most active speaker).  Senators Graham, Hatch, Coburn, and Cornyn, all republicans, asked the most questions at these hearings. Clearly members of the opposing party from the nominating president were more active at the hearings so far reviewed in this post.

Although most senators on the Judiciary Committee voted along party lines as they did in Alito’s case, Senator Graham, the most active speaking republican senator voted in support of Sotomayor’s confirmation.

The senators’ relative sentiments were more predictable along party lines in these hearings than in Alito’s. 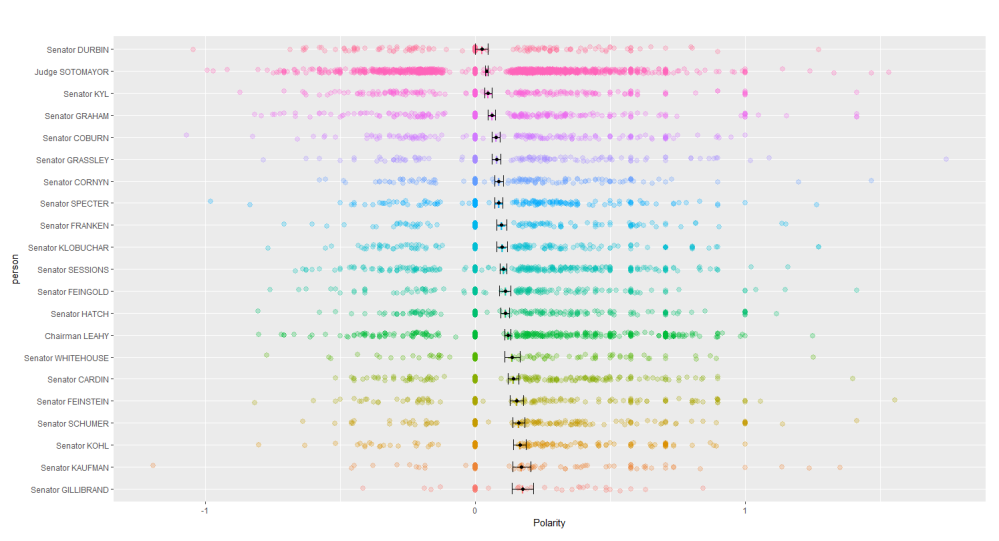 The speech patterns from Sotomayor’s hearings were similar to those in Kagan’s hearings. 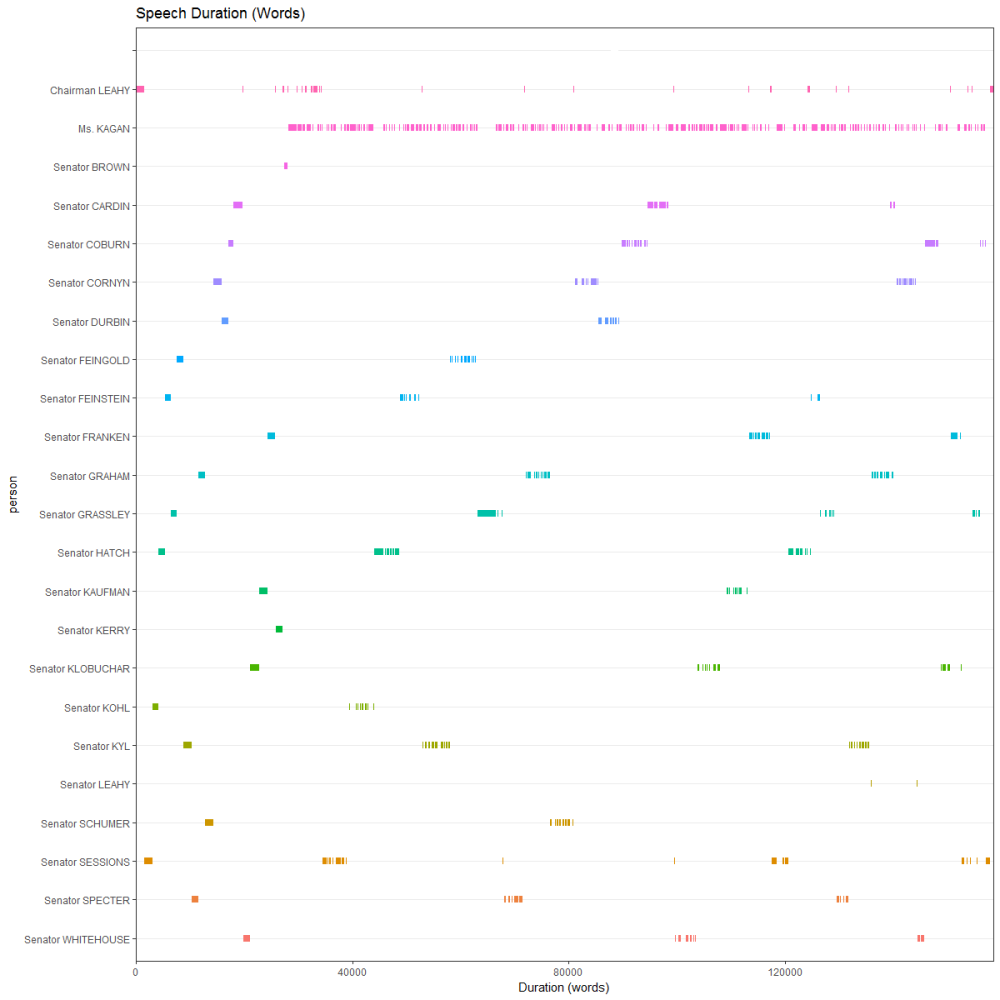 As with Sotomayor’s hearings, at Kagan’s hearings the most active speakers after the chairperson were republican senators.

In terms of overall speech, after the chairperson seven republicans spoke more words and on more occassions than the most active democratic senator.  Senator Graham had far more questions than any other senator followed by fellow Republican Senators Grassley and Coburn.  Again, Senator Graham was the only republican member of the judiciary committee to break with his party and vote in support of Kagan’s confirmation.  Graham also had the most questions for Kagan.

The senators’ sentiment scores for Kagan’s hearings were somewhere in between those for Alito and for Sotomayor. 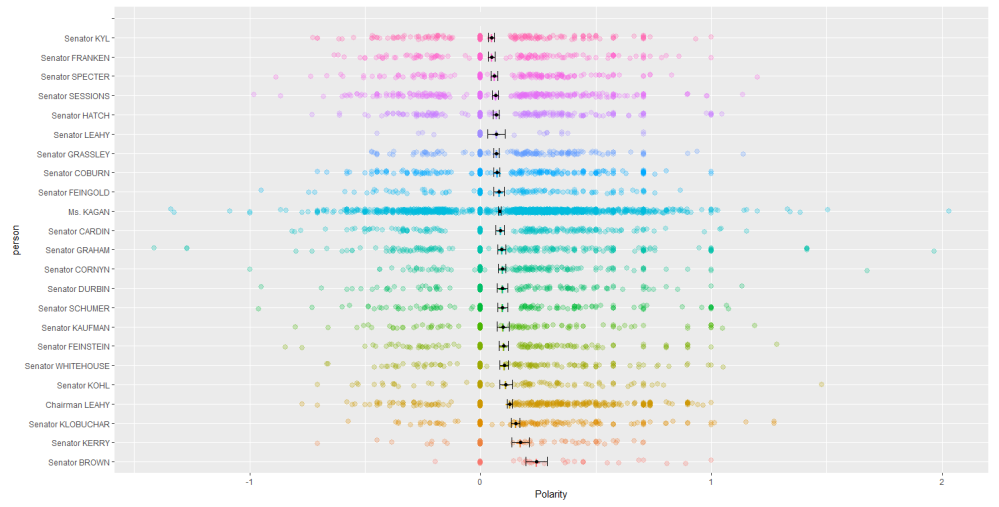 Senator Grassley was the chairperson for the most recent hearings prior to Kavanaugh’s and many senators that were present in Gorsuch’s hearings were not participants in the previous confirmation hearings.

These speech statistics include the opening remarks of Neal Katyal and the one line from then White House Counsel Michael McGinley which was “ I never thought I would carry a bag after graduating law school.” The senators appear to have evenly engaged Gorsuch in the hearings although some of the distinctions are made more evident through the word statistics.

After the proceedings’ chairperson, Senator Grassley, four of the five most active speakers were Democrats with Senators Blumenthal and Whitehouse topping this ranking. After those two senators though Senator Kennedy (R-LA) was the next most active speaking senator.  The seven most reticent senators at the hearing were all republicans. Senators Blumenthal and Graham had the most questions for Gorsuch.

The sentiment scores were only somewhat useful in deciphering the senators’ views of Gorsuch. 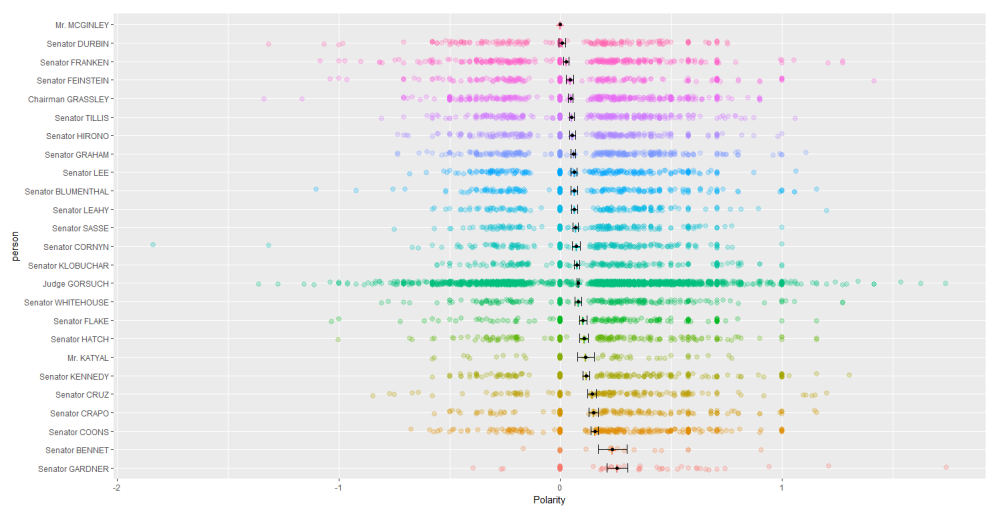 While the bottom three scoring senators were all democrats (Durbin, Franken, and Feinstein), the fourth lowest scoring senator was Grassley.  Further, when looking at the top scoring members of the judiciary committee, Senator Coons (D-DE) was atop the list and voted against Gorsuch.  The next three highest scoring senators, however, were all republican (Cruz, Crapo, and Kennedy) and all voted in support of Gorsuch’s confirmation.

What This Tells Us About Kavanaugh

Some patterns are clear from these four previous hearings and we should expect similar output this time around.